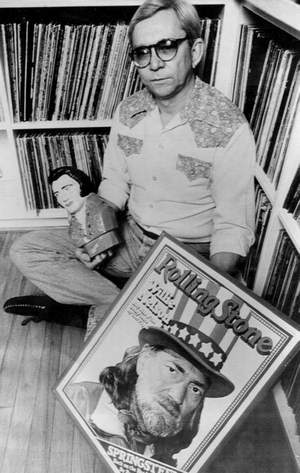 Here’s a piece that Flippo wrote on Waylon Jennings for Texas Monthly back in 1975:

Jack C—-, the federal agent stationed at Gate 56 of the Dallas airport, signaled to his partner when he saw the pair coming, The signal meant “search” and that signal was followed by an announcement to the 23 passengers waiting for Texas International Airlines flight 925 to Austin: “TI 925 will be delayed momentarily due to transient passengers.”

Those transient passengers, the suspicious pair, carried no luggage, had paid cash for their tickets, and were similarly attired: rumpled leather suits, scuffed boots, and hair a little longer than is allowed in the VIP lounge just down the corridor.

Cowboy singer Waylon Jennings and the writer with him slowed down their loping run for the plane as Agent Jack stepped in front of them: “Please step this way… gentlemen.” Jennings carried no identification and Agent Jack was summoning his superior when a light bulb went on above his head: “Aren’t you . . . you’re Waylon Jennings , ainchoo? I thought you was an entertainer. Hell, yes, I see you over at Panther Hall. I go over to Panther and get drunk and raise heil ever wunst in a wile. Go right on through, gentlemen.”

Jennings laughed about it all the way to Austin.