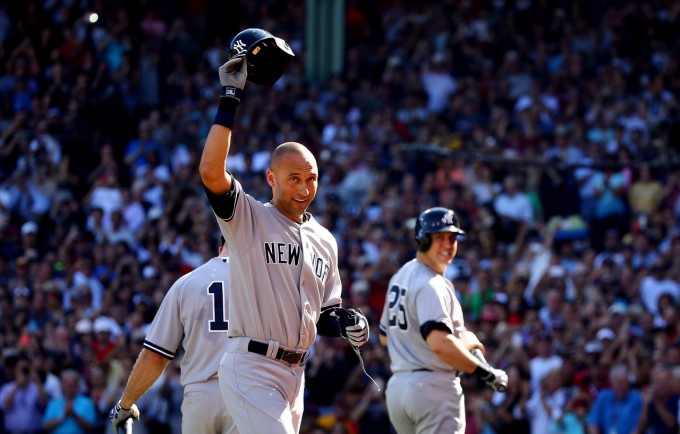 The most memorable part of the final weekend of Derek Jeter’s career wasn’t the 2 hits he collected, the tasteful tribute on Sunday by the Red Sox, or the many ovations he received. It was the sense of relief that enveloped him. For most of his career, Jeter has rarely displayed emotion when talking with the press. Occasionally, he’s been sharp, other times, kidding. But usually, he’s deadpan and emotionless by design. But ever since his final game at Yankee Stadium last Thursday, Jeter showed a vulnerability and tenderness, that made him more accessible than ever before. His famous monotone gave way to something softer, both less sure and more intimate.

And for the first time, he looked unsure of himself at times on the field.

“I’m happy, man,” he told reporters after the last game of his career on Sunday in Boston, in which he went 1-2 with an RBI. “Because it’s hard. It’s a lot of stress, too. Like I said the other day, you try to play it cool, but out in the field with the bases loaded, one out, you’ve got Manny Ramirez at the plate, it’s not a comfortable feeling at times. When you’re facing Pedro (Martinez), trying to get a hit, it’s not a comfortable feeling.

“I remember running into Shawon Dunston a few years ago in San Francisco, and I had never met Shawon Dunston. I saw him on the street; me and Jorge were going to lunch and ran into him. I said, ‘How are you doing?’ He said, ‘I’m stress-free. I don’t have to worry about hitting any sliders anymore.’ So I’m looking forward to it. I gave it everything I had physically, and I gave it everything I had mentally during my time. Now it’s time to step back and, like I said, let someone else play.”

Jeter sat out Friday night’s game but played on Saturday, striking out and reaching on an infield single. He took himself out of the game and sat on the bench for the rest of the afternoon, smiling, laughing his teammates. Since the Yankees and Red Sox were both out of playoff contention, the gamed had a surreal, spring training feel. Then, yesterday, he lined out to short in his first at bat then reached on a Baltimore chop the next time up. The final at bat of his career. He watched the rest of the game from the dugout, and again, seemed relieved.

“I said I was going to play, so that’s why I played,” Jeter said later. “There are a lot of fans that told me that they came a long way to see these last games, so I felt it was right to play here. But don’t think I didn’t think about that, I thought about it. People say, maybe New York was your last game because you want to remember that as the way your career ended. But you can’t take that memory away. I don’t care if I played for another three weeks, that memory is going to be there and it’s never going to go anywhere. I played out of respect for this rivalry and the fans here.”

Jeter’s finale seemed interminable at times but in the end–the classic finish at Yankee Stadium, the relaxed, earnest sendoff in Boston–he delivered one last time and was afforded the chance to take it all in. He showed more of himself than ever before and went out on a high note.

Also, we’ve likely seen the end of Ichio! and our man Hiroki Kuroda. They’ve been fun to watch, and Kuroda, especially, has been a favorite. Man, could be all she wrote for David Robertson too and boy, he’s been a good Yankee. Don’t forget our boy Cervelli, either. Lousy as the season was in some ways, it could have been worse and there were pleasures to be had: Port Jervis, Zelous and Zoilo. How about the bullpen, especially Dellin Betances!

This has been the 12th season we’ve covered the Yankees here on the Banter. The coverage is less intense than it was 5, 10 years ago because I’ve got other interests and besides, now there are so many other wonderful Yankee blogs out there. But I still love watching the team and rooting them on and am humbled to have you guys stop by and hang with us.

The season might be over for the Yanks but this ain’t football–we do this everyday. We’ll be here–served fresh daily!–for the playoffs and beyond.

Thanks for coming through. I really appreciate it.

And thanks right back at you AB. I haven't been able to the follow the Yanks live on a daily basis for 2 years now and it's a void. Whenever I get back to it, I'll be here if you are.

And this winter, we get to go round and round on "will they open their wallets this off-season? should they?" So count me in for that as well.

Yous guys are the greatest.

Man, it was odd seeing Jeter look sheepish, wasn't it? The big lug.

You are such a wonderful writer. Ironically, you talk about Jeter's "emotionless deadpan" and you are quite the opposite.

It is so much fun to check out a game or even miss one, and check out the Banter after. (I rarely watch games as they happen, so I miss out on the in game.)

You have created a warm home for fans to come together and have a sounding board, and also to relish in all the pinstriped good & bad.

The last year's we have had more good than bad. As Jeter leaves, not sure what the face of the franchise will look like for the next few years. I thought it would be Cano until last offseason.

Come what may, I know I can count on Alex Belth to break it down for me.

Love you pal, and thanks!

Thanks for being here everyday Alex. I don't contribute much and being on the left coast I'm often late to the threads (like today),but I've read the Banter every day for many years now and I appreciate the various contributions. I'm hoping they'll resign DRob. I like he and Betances finishing the games out.

i'm (now going to be) less intense about my baseball fandom. well, most likely. but i'm still just as passionate about the banter being my online home and family as i was a dozen years ago when you started it! i've been following since the all-baseball days and am not going anywhere : )

but i definitely feel less of a connection to the team with all the legends gone...

Thanks, guys. Indirectly, I've got Jeter to thank for my writing career. Those Yankee teams in the late 90s were so good--our fortune was so good--that I didn't know what to do with myself. So I started writing about them. First, casually, as journal entries. This was in 1999. Then again the following two seasons. I wasn't disciplined or dedicated and I resisted computers and the Internet. But in 2002, I got a job that had high speed Internet access. That summer, my cousin and I exchanged emails about baseball daily, I started to read, and re-read baseball books, and that fall, I started the Banter.

I didn't know what I wanted to do. I worked in the movie business in my twenties but was pretty lost. Jeter's self-confidence and his work ethic served as an inspiration for me to find something that I enjoyed and then to give that thing my best effort.

How ironic that I ended up writing about him as much, if not more than anyone else.

Like many, I'm grateful for the forum and community here -- thanks Alex for making it all happen.

There's no doubt I'll start to get antsy for game threads by some time in February, but if you have to slog through a winter without baseball, the Banter is the place to do it. Bring on the beats and the art and the million dollar movies and the recipes.

And when there's hot stove to talk about, I know it will be more level-headed and enjoyable here than anyplace else.

(This from the guy who heard about Aaron Boone's injury and hastened to think out loud, "I wonder if Mark McLemore is available?")

So, Alex, who we playin this week?

[8] I've got art and best of the day recommendation to send Alex, at some point...

Thanks for keeping the lights on, AB! The intertubes are old enough now that some truly awesome things have come and gone, and we are all the bittersweet sadder for it - but I am grateful that the Banter abides. ;)

Looking forward to kinda following along with the playoffs, and seeing what the hot stove brings, and then the count down to another February!

If this is twelve years of the Banter then I think I've just wrapped up my 11th or so season hanging at this jernt.

I definitely have less time (and energy) for the game threads now than when I was a youngster, but this remains the first and sometimes only place I go to get my Yankees fix.

Thanks for keeping the lights on Alex and Co.

[13] i remember your bronx comic strip!

Agree with everyone about the Banter, baseball is so much more fun with this community.

Now on to the hot-stove league..and T-Minus 2 weeks and counting until the 'Greatest Show On Earth' (AKA 'The A-Rod Circus') revs up again?

Come fer da Belth, stay fer da Banter, I always says. I've been hanging around about a decade, since I was just a Slice in the Baseball Toaster, and lookit me now, all middle aged.
Alex, you're a terrific, soulful observational writer. As you say, there are plenty of bright and talented Yanks bloggers, but you're our Dude.
Thanks for always keepin it real, and for being such a cool and gracious MC.

Damn, thanks you guys. And bring on any suggestions be it about sports, arts, culture or NYC.

This is the time of year that proves I could never be a full-time baseball writer. Yankees are out of the picture and as everyone else looks to the playoffs, I. Don't. Give. A shit.

You Da Man Al B
And this indeed a great club I'm joyed to be a part of.
The Banter will always be my Home Page youknwhatimsayin'?!
Thanks for everything.
Onward into the Unknown,
edouble