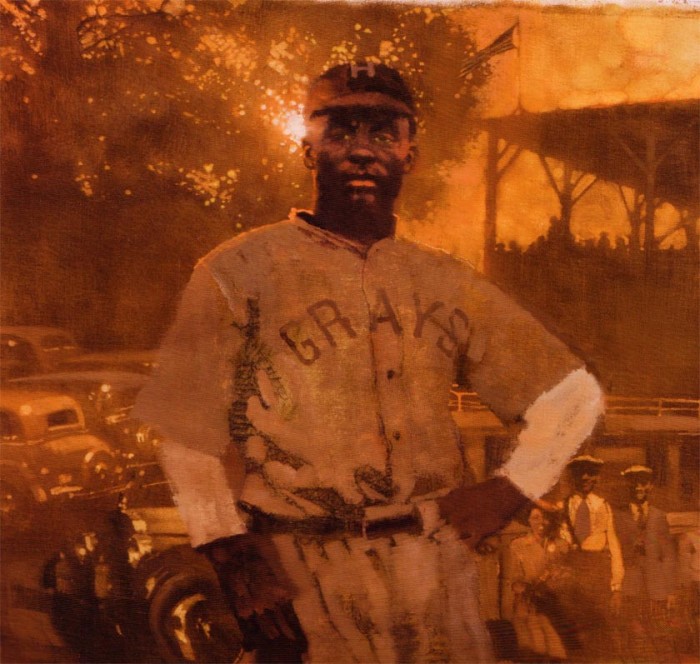 Here’s a classic portrait of Oscar Charleston by our pal John Schulian:

There were some hard miles on that bus, and harder ones on the man behind the wheel. His name was Oscar Charleston, which probably means nothing to you, as wrong as that is. He was managing the Philadelphia Stars then, trying to sustain the dignity of the Negro Leagues in the late 1940s as black ballplayers left daily for the moneyed embrace of the white teams that had disdained them for so long. Part of his job was hard-nosing the kids who remained into playing the game right, and part of it was passing down the lore of the line drives he’d bashed, the catches he’d made, and the night he’d spent rattling the cell door in a Cuban jail. His players called him Charlie, and when it was his turn to drive the team’s red, white, and blue bus, it was like having Ty Cobb at the wheel. Of course the players never said so, because sportswriters and white folks were always calling him the black Ty Cobb and Charlie hated it.

While Cobb counted the millions he’d made on Coca-Cola stock, Charlie bounced around on cramped, stinking buses until he, like their engines, burned out. The Stars would play in Chicago on Sunday afternoon, then hightail it back to Philly so they could use Shibe Park on Monday, when the big leaguers were off. So they drove through the long night, with Charlie peering at the rain and lightning, wondering which was louder, the thunder or the racket his players were making.

When he could take no more, he glanced back at Wilmer Harris and Stanley Glenn, a pitcher and a catcher, earnest young men who always stayed close to him, eager to absorb whatever lessons he dispensed. “Watch this,” he said, yanking the lever that opened the bus door. Then he leaned as far as he could toward the cacophonous darkness, one hand barely on the wheel, and glowered the way only he could glower.

“Hey, you up there!” he shouted. “Quit making so damn much noise!”

The bus turned as quiet as a tomb. “I bet there wasn’t one player hardly breathing,” Glenn says. The Stars were a strait-laced bunch—“the Saints,” some called them with a sneer—and they weren’t inclined to test whatever higher power might be in charge. But Charlie was different from them, and everybody else for that matter. And when the thunder boomed louder still in response to his demand, he proclaimed his defiance with a laugh. If it didn’t kill him, it couldn’t stop him.

[Painting by the most-talented Bernie Fuchs]