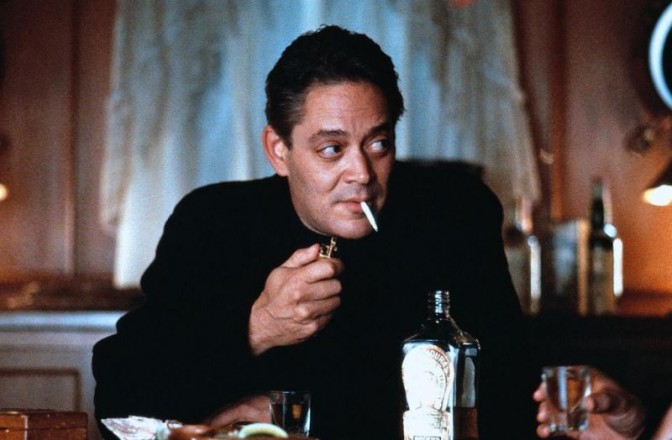 You guys know me as a P. Kael freak so you can imagine how honored I am to be able to reprint one of her reviews–of a fun movie too (Damn, I miss Raul Julia):

The movie is a confluence of fantasies, with a crime plot that often seems to be stalled, as if a projector had broken down. A good melodramatic structure should rhyme: we should hold our breath at the pacing as the pieces come together, and maybe smile at how neat the fit is. Here the pieces straggle, and by the end you’re probably ignoring the plot points. Raul Julia, who turns up as the Mexican Comandante Escalante, has a big, likable, rumbling presence; his role recalls the Leo Carrillo parts in movies like The Gay Desperado, with a new aplomb. And for a few seconds here and there Raul Julia takes over; he’s funny, and he detonates. (The character’s lack of moral conflicts gives his scenes a giddy high.) Then the film’s languor settles in again. An elaborate government sting operation waits while Mac and Escalante play Ping-Pong, and waits again while they sit in a boat and Mac talks drivel about bullfighting. (It’s the worst dialogue in the film; for sheer inappropriateness it’s matched only by Dave Grusin’s aggressive, out-to-slay-you score.)

Most of the dialogue is sprightly—it’s easy, everyday talk that actors can breathe to. But Towne’s directing is, surprisingly, better than his construction—maybe because when he plans to direct he leaves things loose. He says, “I make the character fit the actor, I don’t try to make the actor fit the character.” That sounds as if he’s highly variable, a modernist. But he isn’t. He likes bits from old movies, such as having the cops who are planning to surprise Mac be so dumb that they leave peanut shells wherever they’ve been posted. The difference between the way Towne handles the peanut shells and the way a director of the thirties would have (and did) is that he doesn’t sock the joke home; he glides over it. He wants the effect, yet he doesn’t want to be crude about it, so he half does it. Almost everything in the action scenes of the last three-quarters of an hour is half done. Often he gives you the preparation for action and no follow-through; sometimes the reverse.

Huge thanks to Kael’s daughter, Gina James, for giving me permission to share this with you.