Thurman Munson In Sun and Shade 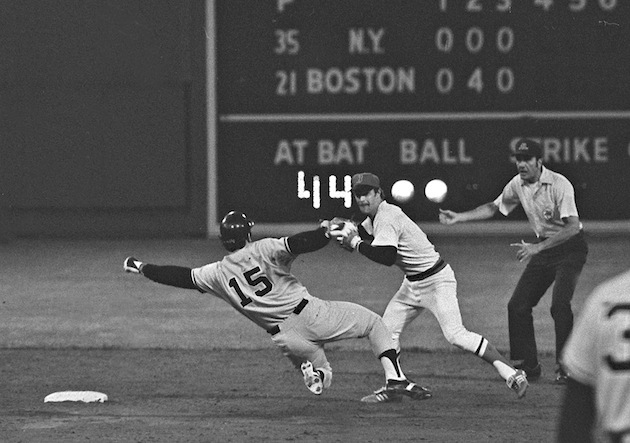 Today is the 34th anniversary of Thurman Munson’s death. Dip over to The Stacks and read Michael Paterniti’s memorable 1999 Esquire appreciation of the Yankee captain:

I give you Thurman Munson in the eighth inning of a meaningless baseball game, in a half-empty stadium in a bad Yankee year during a fourteen-season Yankee drought, and Thurman Munson is running, arms pumping, busting his way from second to third like he’s taking Omaha Beach, sliding down in a cloud of luminous, Saharan dust, then up on two feet, clapping his hands, turtling his head once around, spitting diamonds of saliva: Safe.

I give you Thurman Munson getting beaned in the head by a Nolan Ryan fastball and then beaned in the head by a Dick Drago fastball—and then spiked for good measure at home plate by a 250-pound colossus named George Scott, as he’s been spiked before, blood spurting everywhere, and the mustachioed catcher they call Squatty Body/Jelly Belly/Bulldog/Pigpen refusing to leave the game, hunching in the runway to the dugout at Yankee Stadium in full battle gear, being stitched up and then hauling himself back on the field again.

I give you Thurman Munson in the hostile cities of America—in Detroit and Oakland, Chicago and Kansas City, Boston and Baltimore—on the radio, on television, in the newspapers, in person, his body scarred and pale, bones broken and healed, arms and legs flickering with bruises that come and go like purple lights under his skin, a man crouched behind home plate or swinging on-deck, jabbering incessantly, playing a game.