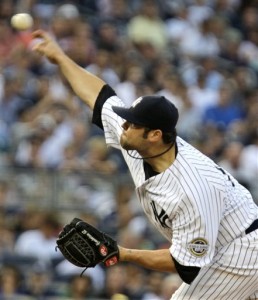 The first-half meme on Joba Chamberlain was “he’s hiding an injury.” Though he wasn’t getting rocked, his velocity was down, as was his energy, and he was pitching tentatively, bearing little resemblance to the cocksure fireballer with the wicked slider we’d all come to know and love since his arrival in late 2007. Now, after his second dominant start in as many turns since the All-Star break, the new meme is “he went home to Nebraska and got his head on straight.”

I like the image; Joba in his Smallville version of the Fortress of Solitude using the green crystal to rediscover his purpose. I like the results too. Friday night, that meant seven-innings of two-hit ball on just 100 pitches with mid-90s velocity throughout.

The A’s got a run off Joba in the first on a one-out double by Orlando Cabrera, a stolen base, and a sac fly, but that was it. He retired nine in a row in the middle of the game before suddenly losing the strike zone and walking two with one out in the fifth and moving the runners up on a wild pitch. Uh oh? Oh no. Joba got both Mark Ellis and Eric Patterson swinging on vintage Chamberlain sliders and delivered a raucus fist pump in celebration of stranding the runners with what was then a slim 2-1 lead. He then came back out and retired the next six men he faced.

Despite the 8-1 final, the game was actually a pitchers duel for most of its length. The A’s rookie lefty Brett Anderson struck out the side in the first and retired the first six men he faced before Robinson Cano reached on an infield single in the third. A Melky Cabrera double, Derek Jeter single, and an RBI fielders choice by Johnny Damon gave the Yankees a 2-1 lead in that inning. That last came when Damon hit a dribbler that A’s first baseman Daric Barton nearly turned into a 3-6-1 double play, but Anderson is astonishingly slow when it comes to covering first. Because Barton had to come so far in to field the ball, no one was at first base to recieve Orlando Cabrera’s pivot throw, which wound up hitting Damon in the wallet as he crossed the bag, preventing an error.

Mariano Rivera was warming up with the Yankees leading 4-1 in the bottom of the eighth, but the Yankees dropped a four-spot on Yalie lefty Craig Breslow and Dominican righty Santiago Casilla, giving David Robertson a rare chance to both pitch (his last appearance came on July 11 in Anaheim) and pitch with a lead (just six of his previous 24 relief appearances saw him enter a game with a lead). Unfortunately for Robertson, he coughed up a couple of runs on a Scott Hairston single, a Kurt Suzuki double, a throwing error by Melky that allowed Suzuki to reach third, and a wild pitch.

After the game, Joba said he was “just going back to having fun and just doing what got you here.” Amen, brother.