The quirky, complex Woody Allen has had, amongst his many dimensions and vocations,  a 40-year career as a movie writer, director and actor.   With about 60 movies to his credit in one way or another, it might surprise folks to read that he considers Zelig (1983) one of his six favorites.

Zelig was remarkable for its time, a feature-length, theatrical  “mockumentary”.  Prior to Zelig, Allen’s own 1969 release “Take the Money and Run” and Albert Brooks’ 1979 film “Real Life” were probably the most recognizable mockumentaries (even before that term was coined by Rob Reiner for his “This Is Spinal Tap“).  Spinal Tap may have been the more mainstream, commercially-popular example of the genre upon its initial release in 1984. However, Zelig placed its subject in a historical context, and the subject’s actions had an impact on world affairs.  This weighty undertaking was then combined with the standard mockumentary “inside joke” humor, fanciful examples of whimsy, and an actual love story, and encompassed all of that within a technical expertise that predated the digital film-making techniques available beginning in the early ’90s.  Its a heady endeavor for a movie that clocks in at a mere 79 minutes.

Set primarily in the 1920s and ’30s, Zelig tells the fictional story of one Leonard Zelig, a seemingly ordinary man who is discovered to have the unique ability to take on the physical characteristics of those around him.  While the premise might seem too thin or flimsy for a feature-length movie (Forrest Gump, anyone?), Allen presents and portrays Zelig as a damaged soul, who seemingly finds acceptance through his “chameleon” nature, albeit with severe (and severely funny) consequences.

Vincent Canby noted this satisfyingly broad palette in his review:

Yet ”Zelig” is not only pricelessly funny, it’s also, on occasion, very moving. It works simultaneously as social history, as a love story, as an examination of several different kinds of film narrative, as satire and as parody.

Co-star Mia Farrow is brilliantly understated in her role as Dr. Eudora Fletcher, a psychiatrist who wants to help Zelig with this strange disorder. She futilely attempts to hypnotize him, and here the film has some of its most riotously dry and funny scenes, with her and Zelig arguing over whether Zelig himself is a doctor.  Allen’s trademark stand-up intonations, timing and vocal patterns imbue the scenes with pure joy.  (4:00 mark onward).

Eventually, she succeeds in hypnotizing him, and through this discovers that he yearns for approval so strongly he physically changes to fit in with those around him. Fletcher’s devotion to finding a cure for Zelig eventually pays off, but not without complications; now Zelig develops a personality which is violently intolerant of other people’s opinions.

I mentioned that this is in fact a love story, as Dr. Fletcher does fall for the lonely, misunderstood, unloved Zelig. While real-life stories of doctors having relationships with their patients may incur scorn, here the storytelling is subtle enough, and the suspension of “reality” legitimate enough, that this “taboo” is overlooked.  Fletcher’s fierce determination to cure Zelig is set against her unfulfilling romance with a man much higher on the social scale.  But something in Zelig, and something about Zelig, beguiles and enchants her to the point of choosing him.

Meanwhile, because of the media coverage of the case, both patient and doctor become part of the popular culture of their time.   Here the technical wizardry and cinematography really come to fore, as Allen’s character seamlessly interacts with the political and socialite stars of the day, from Fanny Brice to Adolf Hitler.

In the book “Woody Allen on Woody Allen“, he discusses the difficulties and creativity in the filming process:

” . . . We got old lenses from the 1920s, old cameras and sound equipment. . . . And we filmed it in exactly the kind of lighting they would have had at the time.  We made flicker-mattes, so that our film would have flickering light like the old films.  And we put scratches in the negative.  . . . There was a few trick shots where I was put into old pictures.  . . . Mostly it was legitimate photography.”

“Yes it was technically difficult.  But (cinematographer) Gordon Willis is a genius and he was able to see what kind of lighting they had in the original newsreel and match the lighting appropriately in the studio against the blue screen. “

The mockumentary takes the authenticity up a notch by humorously incorporating discussions of Zelig’s plight by (then) current-day intellectuals and academics such as essayist Susan Sontag, novelist Saul Bellow and psychologist Bruno Bettelheim.

In a separate appreciation of the film, Canby noted the broad swath of humor confidently exhibited in the film:

Can you imagine a most authentic-looking shot of Leonard Zelig wrestling with the priests surrounding Pope Pius XI on a Vatican balcony? Or another of Leonard, temporarily a member of Hitler’s entourage, peeking around his Fuhrer to wave delightedly to an appalled Dr. Fletcher, who’s in the audience during a giant Munich rally? In ”Zelig” you’ll see these and even wilder flights of cinema fancy.

The movie’s wit never flags. ”French intellectuals,” the film’s stentorian narrator assures us of Zelig, ”see him as a symbol for everything.” As important as the humor, and quite unexpected, considering the high quotient of satire and parody, is the film’s generosity of spirit.

I was 20 when I first saw this movie.  At the time, I understood it merely as a farce . . . a gag . . . “Woody being Woody” if you will.  Repeated viewings have revealed to me the subtle nuances of what Allen was trying to get across.

First and foremost, there are the manifestations we all go through to be accepted.  In one of the early Fletcher/Zelig therapy sessions, there is this brief but important exchange:

Fletcher: Do you want to be safe.

Zelig: I want to be liked.

There is also the not-so-subtle political commentary of the contrast of Zelig’s yearning to fit in, with his assimilation into the stifling mind-think of the Nazi Party.  At the same time, one might theorize that Allen made it a point to have his Jewish lead character possess the ability to become a member of another “subhuman” target of Nazis, that being Asians and African-Americans.

In the book “American Jewish Filmmakers“, authors David Desser and Lester Friedman examine the religious and ethnic undertones of Allen and his character Zelig:

“The link between self-hatred and anti-Semitism is most shocking when Zelig transforms into a major member of the Nazi Party.   Although awesome technical brilliance reveals the tiny figure of Leonard Zelig on the dais behind and screen right of ranting and raving Adolph Hitler, the image of the little Jew now an active member of the group that sought to annihilate his people is mesmerizing.  By this cinematic, even cultural, yoking of opposites, Allen illuminates the tragedy of German Jews trying to assimilate into a mainstream society that viewed them as enemies or outsiders to be slaughtered.”

Within the movie, there is also a jab at the commercialization and sensationalization of anything new or different or hopeful, especially pointed when taken against the backdrop of the Roaring ’20s succumbing to the collapse of the stock market in ’29.  Of special amusement in this regard is a couple of scenes from a hastily-produced movie about Zelig entitled, “The Changing Man”, in which a much more stereotypically Hollywood attractive version of Fletcher argues on behalf of Zelig.

There is also the understory of a strong-willed professional woman in the 1920s and ’30s being looked down upon by her male contemporaries, and sticking to her beliefs.

All of these nuances, and more, are enveloped in a spot-on presentation of period musical numbers, dances, products, all specially created for this film.  Zelig succeeds on many levels, for a wide variety of film-goers, because it shows an ordinary man literally become an “everyman”, at once unique and homogenized.

In this age of CGI, 3-D and hyper-sensory film-making, one wonders how Zelig would be (re)made today.  Given the attention to detail undeniably evident in the original, I for one would not wish for a remake or sequel.  Let me keep this little slice of film heaven. 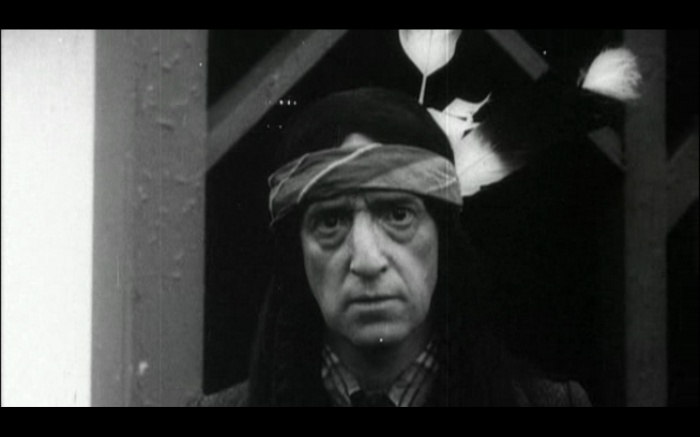 All I can think of is, "Everybody Go Chamelion."

Thanks Diane. I saw this, as you did the first time, a little too young to get all that was going on.

I love your review because it makes me want to rush to see it again.

Thanks Jon ... its one of the few movies I would actually buy to watch again and again. It has little treats to discover every time.

I remember what a technical achievement it was at the time. That really caught a lot of buzz and the movie did really well in the city when it was first released.

post-Manhattan this is still Woody's best "fun" movie in my opinion. Even his larks are elevated to high art, its really amazing.

I'm glad you guys are doing this era of his career. So much has been written about the (roughly) Sleeper-to-Stardust Memories era, that its nice to see the mid/late '80's recognized. Woody was really in his wheelhouse in these years.

Whenever we need a fourth "Zelig" always shows up.

Been years since I saw Zelig..need to go back and watch now!

Will there be any coverage of his recent work? I love early Woody Allen (like many do) but man, last film I saw of his was just awful...

7) We're just doing a string of movies of his from the 80s...at first I wanted to do a Woody month! LOL. We could do all sorts of periods and we'll do more Woody in the future. Personally, since Radio Days, I've enjoyed very few of his movies. Not there haven't been some good ones--Husbands and Wives, Bullets Over Broadway, Sweet and Lowdown, Deconstructing Harry all had things to recommend about them--but they stopped mattering to me in the same way by the late 80s, early 90s.

[8] I really liked Husbands & Wives, though it was a great portrait of someone whose life was falling apart bigtime (though really, maybe not the best idea to be kissing your student Juliette Lewis when in real life you're schtupping your adopted step-daughter..)

Sweet & Lowdown was superb, great soundtrack and preformances by Penn and Samantha Morton..generally, it would be better if he did not act in his films anymore...i havn't seen Match Point yet, though heard it was good.. (and that you need to watch it twice cause the first time you're too distracted by Ms. Scarlett..ahem...)