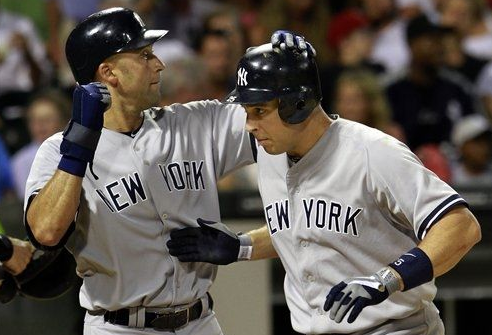 The general consensus heading into Tuesday night’s matchup with the Chicago White Sox was that Phil Hughes, ye of the 8.24 ERA and 1.90 WHIP, would be the odd man out of the Yankees’ newfangled six-man outfit. In his last two starts, he chumped his way through the Oakland A’s lineup in a way that Ivan Nova didn’t when being given a huge lead, and then struggled through six innings against a Seattle Mariners team that is redefining feeble.

Hughes was seen throwing in the bullpen during Saturday’s Game 2 blowout, and later confirmed it was a scheduled throw day and he was still trying to find his mechanics. Maybe something clicked in that session and he didn’t leave it all on the range, so to speak.

Hughes barreled his way through the White Sox lineup, allowing just three base runners in six innings, and throwing only 65 pitches before rain halted play prior to the bottom of the seventh inning. It was the hardest Hughes had thrown all year — he was consistently in the mid-90s with his fastball and spotted it as well as he has all year. He was aggressive when reaching two strikes on hitters. Hughes ended the first inning with a 95-mph fastball on the outside corner to strike out Carlos Quentin looking. In the second, he struck out A.J. Pierzynski on a nasty 0-2 curveball and later blew away Gordon Beckham with a letter-high fastball clocked at 94 mph. We haven’t seen Hughes at that level of attack mode since 2009, when he was Mariano Rivera’s setup man.

In addition to being aggressive, Hughes, who had averaged 15 pitches per inning and slightly better than 5 1/3 innings pitched over his first seven starts of the season, was efficient. He needed only 65 pitches to get through his six innings. Hughes had also entered the game with a decidedly higher ratio of flyball outs to groundball outs (2.23-to-1). He balanced that out to an even 1-to-1, inducing seven groundball outs and seven flyball outs.

On the YES telecast at the start of the rain delay, Michael Kay opined, “If someone said to Brian Cashman, ‘Hey Brian, if you could acquire a 25-year-old All-Star, would you take it?’ He might get that back right now.” Is Kay’s praise overstated? Hughes looked an awful lot like the pitcher who earned an All-Star selection in 2010, won 18 games and was the No. 2 starter in the playoffs before his mysterious deadarm period. It was his best outing of the season to date. It was also the third time in his last four starts that he completed six innings, so perhaps Hughes’ stamina is increasing along with his arm strength.

What to make of this? We need to see a larger sample size to get a true gauge of what Phil Hughes is, and what he will be. The Yankees like their “proven guys” heading into the playoffs. That he didn’t lose his spot in the rotation after his DL stint, despite numbers that resembled Chien-Ming Wang circa, well, since he injured himself running the bases in Houston in 2009, proves the Yankees want Hughes to be one of their guys down the stretch and beyond.

Hughes still has some proving to do, but the initial signs are encouraging.

BIG BATS, BIG TEX
Hughes benefited once again from great run support. Sixteen times last year the Yankees scored 6 runs or more for him, and they’ve now done it in two of his last three starts.

The Yankees jumped on lefty John Danks early, scoring in each of the first three innings. They broke the game open with two more in the sixth. Mark Teixeira homered from both sides of the plate to come within one of Jose Bautista’s American League lead. The two home runs were also historic: his first home run, a two-run shot in the fourth off Danks (batting right-handed), marked the eighth straight season Tex has hit at least 30 home runs. His solo shot in the sixth off Jason Frasor (batting left-handed), marked the 12th time in his career he’s homered from both sides of the plate in the same game. Teixeira is now the all-time leader in that category.

In another under-the-radar note, Derek Jeter’s first inning single moved him past Rafael Palmeiro for 24th on the all-time hits list. His next hit will tie him with Lou Brock. At his current pace, he should pass Rod Carew (3,053), Rickey Henderson (3,055), and Craig Biggio (3,060) and finish the season at No. 20.

Have to say I really didn't see it coming, but it's a great sign.

His velo still dropped earlier than I would like, but it was a marked improvement over his previous starts, so I'm hoping for even more improvement as he goes forward.

i'm really diggin the recaps. good work. no charts, no graphs, some stats. just the way i like it. bronx banter is becoming the first thing i look at after the box score when i get home to see how the game went. thanks.

Fun game. I'm almost glad it was shortened, because the rest probably would have had a disappointment or two.

3. I never knew that about 'ye'. So it's like saying, you all. Interesting. There's really no modern equivalent is there?

[3] That is great stuff and I will be a better writer for it. Thank you. I'll also relay it to my wife who is an English teacher. In all fairness, the way he's pitched this year prior to last night, though, wouldn't you say that there were a whole bunch of rotten Phil Hugheses?

assuming nova pitches well thursday and thus makes it hard for the yankees to send him down again, couldn't they go to a 6 man rotation where they keep cc on regular rest and everyone else on an extra day for a few weeks.
that would give both hughes and nova a chance to remain starters in the majors, as well as give bartolo and freddy a little extra rest down the stretch which i think would be beneficial. and frankly i wouldn't be overly concerned what impact this has on aj.

[6] As the odd man out? The telltale sign will be if Hughes can maintain mid-90s velocity for more than six innings in at least three consecutive starts. I believe in his current state, he's best suited to slot in with D-Rob and Soriano as bullpen insurance. Nova is next in line for that swingman type role. I think it'll end up being CC, AJ, Colon, Hughes and Garcia from here on out.

Yes, Will, it's a nightmarish thought but he has indeed been a multiple personality pitcher. Let's hope that phase is over.

Interesting, rbj and Ben. I don't have y'all in my dialect, but I've heard native speakers say both: that standard y'all is plural (this is what Roy Blount Jr. says) and that it is often or even always singular. I wonder if that's a regional difference. And Ben, New Yorkers have youse!

[6] My prediction is that Nova gets sent down. For one thing, that's the "easy" solution, since he has options and is least likely to have hurt feelings about it.

i don't see any way hughes gets taken out of the rotation at this decision point - they need to see if he can build some jm type consistency from this start.

oh and i am pretty sure i remember y'all being used as the singular and plural form in alabama.

[11] yeah i think that's right. all y'all seems to come into play when there is some doubt about which group of y'all someone is talking about. but i'm sure it various in usage a lot.

[12] haha, yeah i think all y'all is sometimes used to make sure everyone present knows they are part of y'all - such as "all y'all fucked up."

[8] Yup, odd man out. I don't like a 6 man rotation. I'm sure starters don't like it either, as it means fewer opportunities for Ws, important for contract time (and this is a business.)

I could see sending Nova down for the remainder of August (doubt that SWB will make the playoffs) but he's got nothing left to prove there. 2012 will be easier, we've got a 4 man rotation already, just need a fifth starter.

How about splitting the fifth start: Start Phil for 5 innings, then bring in Nova for the last four? And occasionally reverse that.

[14] Split start: I like that, but there's no way Girardi would. (There's no file for that on his iPad.)

For next year, I could definitely see re-upping Colon. I'm guessing not Freddy, though. And don't forget Banuelos...

[15] I anticipate Banuelos will spend next year at SWB. Then ease him into the rotation a la Nova - a few short starts in 2013, make his case for being a starter in 2014.

Top young pitcher back in form. What's not to like. Going with six and keeping CC on rotation for a while would be fine. I prefer to let the professionals handle this. Now that GS is gone the organization has a short range and long range plan. It doesn't change because someone got a suggestion from his eye doctor.
Gee, Phil was really good last night. Young pitchers on the rise. Coin of the realm.