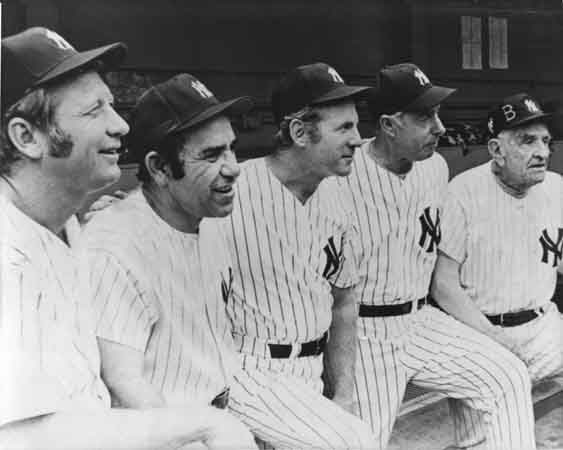 When Albert Pujols decided to break his 11-year bond with the St. Louis Cardinals, there was much lament expressed about the perceived gradual decline in one-team, or legacy, players. Upon closer inspection, however, it appears as the practice of playing a long career in only one uniform has never really been that prevalent, which makes this rare breed all the more special. 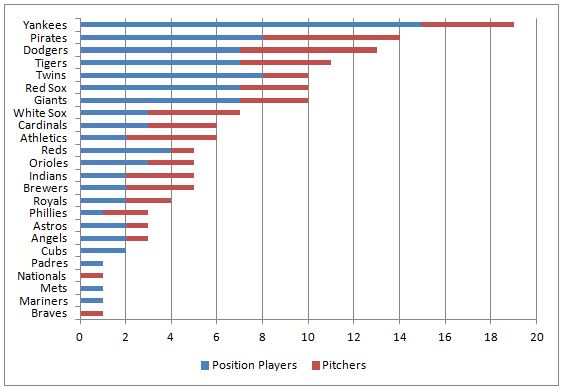 Note: Based on a minimum of 10 seasons and 4,000 plate appearances with one team for positions players, and 10 seasons for pitchers. Year of retirement is used as basis for enumeration.
Source: Baseball-reference.com

As illustrated by the chart above, the Yankees have had more legacy players than any other team. Beginning with Lou Gehrig and continuing on to current players like Mariano Rivera, Derek Jeter, and Jorge Posada, the Yankees have featured a litany of Hall of Fame players who never suited up for another team. This royal line of all-time greats has not only helped the Bronx Bombers compile one of the most impressive records of success in all of sports, but also created a rich history that has become an integral component of the Yankees’ brand. The Yankees have had 19 “franchise players” (which could grow to 22 if the three aforementioned members of the core four retire in pinstripes), including several who are considered to be among the very best players in the history of the game. In comparison, the bottom-15 teams on the legacy chart (including six teams that do not have any) only have 16 such players combined. Despite this stark contrast, many teams do boast at least one prominent franchise player. Lists containing each team’s most tenured legacy position player and pitcher are presented below. Note: Listed players lead their respective franchises in games played with only one team. * Denotes a Hall of Famer.
Source:Baseball-reference.com

Not surprisingly, many of the players included on the lists above are in the Hall of Fame. Among the position players, 60% are enshrined in Cooperstown, while 35% of the pitchers (and 55% of the starters) have a plaque hanging in the Hall’s gallery. Although most of the players, even those not in the Hall, are household names, there are also some who are rather obscure. None, however, were as futile as Pete Suder, who not only ranks as the Athletics’ all-time games leader among legacy players, but managed to post a negative WAR despite being afforded such longevity.

Stan Musial, Carl Yastrzemski, and Cal Ripken all made much better use of their opportunities than Suder. That trio comprises a select fraternity of players who appeared in over 3,000 games, all for one team. Meanwhile, Walter Johnson’s 935 games with the Senators easily outdistances all other legacy pitchers. However, it should be noted that when Mariano Rivera retires (assuming he ever does), his 1,042 games (and counting) would easily surpass the Big Train, although Johnson would retain the title among starters.

Note: Includes those players who meet the criteria outlined in the exhibits above, but who have not yet retired.
Source: Baseball-reference.com

Other current players creeping up on the list of legacy leaders include Chipper Jones, who could become the first Braves’ position player to spend at least 10 seasons and 4,000 plate appearances with the franchise. Similarly, Carlos Zambrano, Aaron Cook, Michael Young and Todd Helton could also become their franchise’s first legacy player/player, assuming they don’t sign with another team before retiring. Finally, Derek Jeter and Ichiro Suzuki are also in line to join the list by overtaking Mantle and Edgar Martinez, respectively, for their team’s leadership position.

How important is it for a player to spend his entire career with one team? Does it matter that Ron Santo, the quintessential Cub, played his final season for the cross-town White Sox? Or that Willie Mays and Hank Aaron capped off their historic careers by returning to the cities where they started, but with a different franchise? How many people even know Yogi Berra had nine plate appearances with the Mets, Christy Mathewson pitched his last game with the Reds, and Ty Cobb passed the 4,000-hit plateau wearing the uniform of the Philadelphia Athletics? Granted, in situations like Albert Pujols’, when a player splits a long career with two different teams, there can be a conflict of loyalties, but for the most part, staying true to only one team is little more than trivia bookkeeping. It may be fun to discuss and romanticize, but lasting legacies are created by the impact a player makes in a uniform, not how long he wears it.

William, this is a great job, as always. Man, that Yankee legacy team is for real. I wonder how many guys were near-legacy players. Guys who spent most of their career in one place only to finish the last season or two in another uniform.

yea great stuff as usual william.
[1] that would be interesting too - like the "twilight" players - willie mays would be the star of that team.

the idea of a legacy player and tarnishing their reputation really seems like an extended backlash to free agency. was babe ruth's legacy tarnished when the sox traded him? it's really only when the player goes to another team that this notion is brought up.

the dynamics of player movement in mlb where there is no cap and max salary compared with what's happening in the nba now is fascinating.

[1] I was going to make that part of the post, but baseball-reference couldn't parse the data that way. My guess is the number is very large.

[2] I think what gets lost in the discussion is that when these legacy players depart, it's usually because the team doesn't want them (see Jorge Posada). That was true during the days of the reserve clause, and it's true today. More rare is a case like Pujols in which the player decides to leave his team after over 10 years of service.

Think about when the Reds didn't want Frank Robinson anymore...dopes.

[3] yeah good point.
pujols is also rare because he extended with his team the first chance he could have left and then was still great enough to be wanted when he hit free agency again.
who else are potential legacy players that left?
arod from seattle is the first candidate that i think of.

[4] Or the Athletics decision to sell a 28-year old Jimmie Foxx to the Red Sox. For all the bellyaching about the curse of the Bambino, Boston was gifted the next best thing 15 years later, but never could take advantage.

[5] If the distinction is "left", the list is probably small. There are cases of teams selling stars, like Foxx, but those voluntarily leaving after more than 10 years has to be select. Not even Arod would qualify because he only played 7 seasons in Seattle. The Mariners do have Griffey and the Big Unit, however, which shows you how great that team could have been.

[3] Or when the Yankees no longer wanted Babe Ruth and he winds up on the Boston Braves. Didn't the Yankees want him to retire, but Babe just didn't want to hang up the spikes, despite the decline?

Not a legacy player, but certainly a legendary player.

[8] Ruth wanted to manage, and thought he had an implicit promise to do, but the Yankees weren't interested in having him do that, so they parted ways. By most accounts, the Yankees treated Ruth very shabbily at the end of his career.

I was surprised not to see Wakefield on the list. I didn't know he played two seasons with the Pirates before his 17 years in Boston. I imagine he's still considered a legacy player by Red Sox fans.

[10] I remember Wakefield on the Pirates; I'm surprised he wasn't with them longer than that. I always looked at him as a displaced Pirate. 17 years? Where did all the time go?