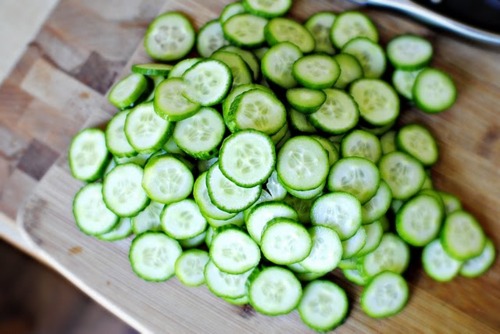 I sure do love me some cucumbers.

I don't mind having them in a sandwich or salad because they often don't have an overwhelmingly sour or bitter flavor that would piss me off (unless left to mature, of course). They are in fact useful for antioxidants, potassium, vitamin K and such... so yes, I approve >;)

See? I am open-minded about certain things >;)

[1] ooh, i'm glad you mentioned that, 'coz my mom was recently saying they were useless.

also, it's kinda confusing, 'coz they're always considered a vegetable, but they have seeds, like a fruit. the dictionary even lists it as a fruit...

[5] I almost agreed with your Mom, but a while ago I looked up their value since my housemate wanted to buy low-cost veggie and fruit alternatives to romaine lettuce for her guinea pigs (who are just as picky as you and I, if not moreso) and saw a nice list of benefits. Since they're only one or two steps away from dill pickles (which I do like a lot), it wasn't hard to add to the menu. But along that train of thought, it's iceberg lettuce that's useless.

As for the fruit/veggie dilemma, dude who cares? My definition of a fruit is any known edible plant that you can eat by itself in your hand and not look like an idiot; i.e apples, oranges, grapes, strawberries and the like. Tomatoes, potatoes, onions and cucumbers are therefore veggies because I can't imagine a kid giving any one of those things to a teacher and becoming teacher's pet, nor would they make good pie.

Then step two, another indication: would it be better as jelly (fruit) or soup (vegetable)?

As for ketchup, who voted these mendicants in that they would take the time, never mind decide, that it was officially a vegetable? Really?? You have the power to turn sauce in to a vegetable, but you can't make a decision on a spending bill or balance a budget within a year?

I love it when you two Mo's agree.