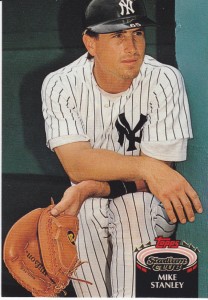 So who will be the Yankees’ designated hitter? The first DH name that came up in the aftermath of the Jesus Montero trade was Carlos Pena. But he wanted too much money for the Yankees’ liking and returned to Tampa Bay. The second name belonged to Johnny Damon, who instead expressed an interest in returning toDetroit, only to see the Tigers sign Prince Fielder to that ridiculous nine-year contract. So Damon is still in play for the Yankees, at least for the moment. Next up on the list is former Phillie, Mariner, and Royal Raul Ibanez, who is also a free agent. My reaction to the possibility of Ibanez becoming a Yankee? Don’t touch this guy with a ten-foot bat, corked or otherwise.

Ibanez is a native New Yorker, a good guy with a strong clubhouse reputation, and a left-handed hitter with power, so it’s only natural that his name would come up in connection with the Yankees. But that’s where the interest should begin and end. At one time, Ibanez was a fine hitter with the Royals and Mariners, capable of slugging at or near .500. Those days are over. He’s 39, hit only 20 home runs last year despite playing in a hitter’s playground, and slugged a mere .419. His on-base percentage was more strikingly worse, a meager .289. This guy’s not a lefty DH. He’s barely even a good pinch-hitting candidate at this point in his career.

With Ibanez, there’s no consolation coming from his defensive play. Though he spent the last three years playing left field for the Phillies, his fielding is–and always has been–atrocious. There’s a video somewhere on the Internet from a game in which Ibanez is playing for the Mariners against the Yankees. After he fields a ground ball down the left field line, Ibanez attempts to throw the ball back toward the infield, but he instead accidentally spikes the ball, which travels a few feet to the right and straight down to the ground. Video records are incomplete, but it may be the worst throw in the history of major league baseball.

Of course, that play represented Ibanez at his worst, but his general level of fielding acumen ranks somewhere between bad and poor. For his career, TotalZone puts him minus 5 for his play in left field, a ranking that matches his awful reputation. As a point of comparison, former Yankee Marcus Thames has a career TotalZone of minus three. So, by this rating, Ibanez is even worse than Thames, a frightening proposition. Yikes.

So other than DH, there’s no where to play Ibanez without risking further embarrassment. And if he’s not good enough as a hitter to be a DH, then there should be no role for him on the 2012 Yankees… 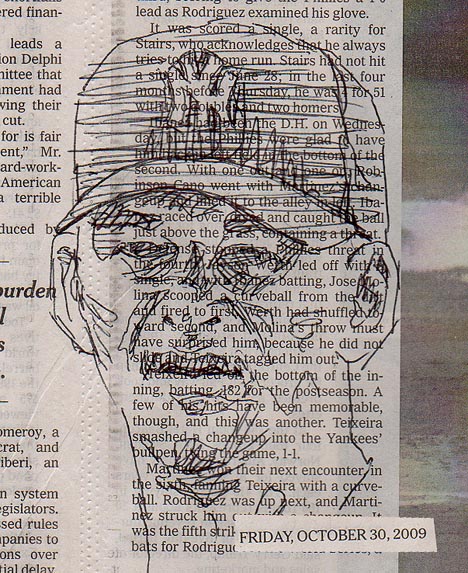 In assessing the great catchers of Yankee lore last week, I discussed Jorge Posada and Thurman Munson while referencing Elston Howard, Yogi Berra, and Bill Dickey. Though he was neither a particularly strong defensive player nor a longtime Yankee, I should have included at least a footnote mention of Mike Stanley. In terms of pure offense, Stanley was one of the best catchers the Yankees have ever had, putting up OPS numbers of .800, .923, .929, and .841 from 1992 to 1995. In 1993, he even received some votes in the MVP balloting. Stanley’s emergence as the No. 1 catcher coincided with the Yankees’ return to glory in the mid-1990s.

Why have we forgotten Stanley so quickly? Unfortunately, he didn’t join the Yankees until he was 29, the result of one of Gene Michael’s prudent free agent signings. He played four full seasons in New York, left when the Yankees acquired Joe Girardi, spent a year and a half with the Red Sox, and then returned to the Yankees as a DH for the tail-end of 1997. As a matter of bad luck, he missed the Yankees’ 1996 title while in Boston, and was not brought back for the world championship season of 1998. The end result was zero titles for Stanley.

The emergence of Posada over the last decade and a half also made it easier to overlook the prior contributions of Stanley. But Stanley was a very good player, a right-handed hitter with power who had a terrific opposite field stroke, and brought the kind of patient, grinding style at the plate that became a hallmark of the Yankees in the mid to late-1990s. He wasn’t Posada and he wasn’t Munson, but Stanley was an important part of the Yankee turnaround, and that makes him an important part of franchise history…

A few Yankee fans have asked me which of their bottom-of-the-rotation starters will be traded between now and Opening Day. I don’t think it will be Phil Hughes, if only because the Yankees would be trading him while his value is so low. This Yankee administration hasn’t forgotten that Hughes was once their top prospect, and the front office would love nothing better than to see Hughes report to spring training in good shape and take aim on the potential that he seemed to be tapping two years ago. I also don’t think that the Yankees will trade Garcia, who is probably the one pitcher best suited to serving as a long man/spot starter. Nothing seems to phase “The Chief,” so I’d expect he’d handle the Dick Tidrow/Ray Burris/Ramiro Mendoza role without a hitch.

That leaves A.J. Burnett, who still has two years to go on that nonsensical contract and continues to be Yankee fans’ greatest source of frustration. Is Burnett tradeable? Sure, anyone is, assuming that the Yankees pick up enough of his contract. But I do get the feeling that Brian Cashman will want something tangible in return, whether it’s a lefty DH or a utility infielder. If the Yankees eat something like 80 per cent of the $33 million owed to Burnett, then Cashman will expect a player in return, and not just some 25-year-old middle reliever pitching in Class-A ball.

There have been suggestions of a swap sending Burnett to the Cubs for Alfonso Soriano, but there is a problem with that. Soriano has three years remaining on his monstrosity of a contract, meaning that the Yankees would have to commit an extra year compared to the two years left on the Burnett deal. Soriano also happens to be a right-handed hitter, making a platoon with Andruw Jones a bit unfeasible.

Still, there may be a deal out there somewhere. At the right price, a team might just think that it can fix A.J. Burnett.

Yo Happy Birthday B!

Don't ask me. I was the guy saying, after Aaron Boone went down, "Hey, Mark McLemore might have something left in the tank." :)

An AJ for Adam Dunn trade kinda makes some sense to me. For both teams.

I don't see AJ making the rotation or carving out a spot in the bullpen. So he has to go, from the Yankees perspective. He won't unless Cash can find a team with another high-priced flop, and Chicago could be that team with Adam Dunn being that high-priced flop.

The Yankees would be picking up an additional $11million over three years, but if Dunn returns to any level of respectability as a DH against RHP (A-Rod, Jetes and Tex would get the bulk of DH starts against LHP) over those 3 years, then it will be worth it.

From the perspective of the White Sox, they would save $11 million on Dunn's contract and AJ (who probably looks great in black) could find a spot in that rotation. Danks and Floyd are good, but coming off down years. Chris Sale has never made a start at any level in the pros. Phil Humber was a great story before the All-Star break, but he fell off a cliff in the 2nd half. And Jake Peavy? "Ooo...my arm!" There has even been talk of moving Peavy to the bullpen, maybe as a closer. All I'm saying is that there are PLENTY of question marks in that rotation, and a guy like AJ could fill a need for them.

And maybe both guys just need a change of scenery. Who knows. I say roll them dice, Cash.

[0] Bruce, great job. Hope you enjoyed your cake day. Thanks for reminding us of Mike Stanley, he was one of my favorites back then. I was bummed when he went to Boston. And I'm right there with you on Ibanez - over the hill.

Re DH, AJ, [3] & [6]: I raised this a while ago, but if they sign Bill Hall, or a similar guy for the utility role, does that mean that they do the rotating DH + Jones and forego signing a DH? Still, something has to give in the rotation, right? I like AJ for Dunn, but I also like AJ for a bucket of balls, so....

I'm in the minority but..who is the Banter faithful going to obsess about if AJ is traded? I say keep him! Makes the season more enjoyable. :)

Did I mention Alex (Rodriguez, that is since I refuse to call a grown man A-Rod)'s inevitable Average Joe fail, or his Fountain of Youth fail? C'mon, that's good stuff. Trade A.J. ferchrissakes; we need hilarity, not delirium...

Alex has something to prove this year. If he can't, I'll just hope he has too much pride to play like a bum and calls it quits early. How much longer will it be after that before he gambles it all away and ends up on reality TV? Wow, this conversation is getting depressing.

[12] A-Rod hangs with Warren Buffett..unless he's ignoring the advice I am sure his $ will be OK.
[10] I like the drama, what can I say? Bring on BxZooII, baby!

Thanks for the nice birthday wishes, guys. I wasn't sure if many of you would even see the birthday note. Silly me, underestimating the ability of the Banter readers and posters!