Color By Numbers: To Homer, Or Not To Homer? Should That Be the Question? 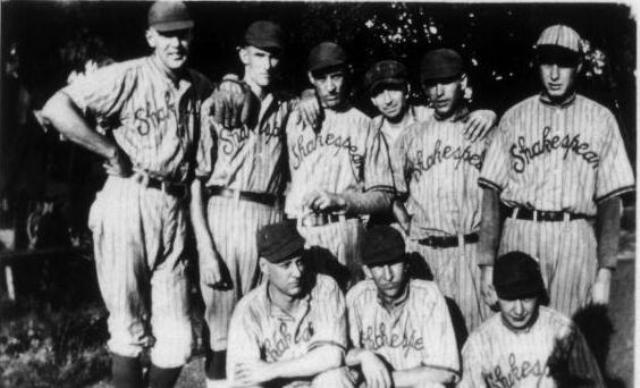 Around this time last year, I took a look at the growing belief that the Yankees hit “too many home runs” and concluded there wasn’t much wisdom in that unconventional thought. However, following a recent period of offensive malaise, the same theme has popped up once again. So, let’s take another look.

Yankees’ Record in Homerless Games, Since 1918 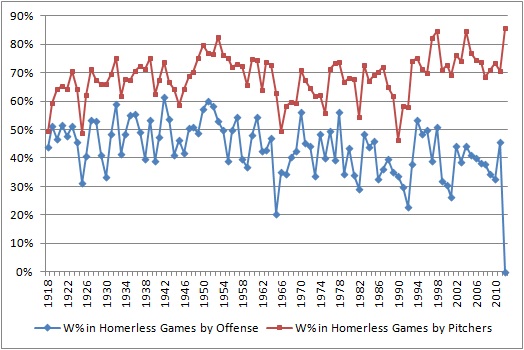 A fashionable statistic making the rounds this morning is the Yankees 0-8 record when the offense fails to hit a home run. Despite the very small sample, this still seems to be a very intriguing relationship, especially when you consider that in half of those games the Yankees only allowed four or fewer runs. What’s more, the team’s bottom-four and six of the bottom-10 games in terms of WPA (win probability added) also happen to come from among the eight they’ve played without hitting a home run. So, it seems as if the team’s offense has suffered from a feast or famine syndrome with the long ball. However, that doesn’t mean the problem is “too many home runs”. So far this season, 91 of the Yankees’ 177 runs, or just over half, have come via the home run, which compares to 44% cumulatively between 1996 and 2011. Of course, it should also be noted that the Yankees’ current run/game average of 4.76 is almost three-quarters off the .5.48 rate posted from 1996 to 2011. In other words, the Yankees aren’t hitting too many home runs. They just aren’t scoring enough runs, which is mostly a byproduct of a recent dry spell with runners in scoring position (it wasn’t too long ago that the team was scoring at a historic pace).

Just as the Yankees have found it difficult to win when they don’t hit a home run, the team has had good success when its pitchers keep the ball in the ballpark. Unfortunately, there have only been seven such occasions, which is by far the lowest percentage of homerless games since at least 1918. With the exception of C.C. Sabathia, Yankees’ starters have given up more than their fair share of homers, which, in turn, has significantly mitigated the relative power advantage that the team usually enjoys. This is the real problem.

Percentage of Games in Which Yankees Have Not Allowed a Home Run, Since 1918 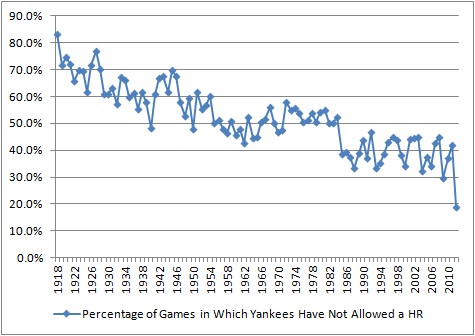 It’s easy to understand why so many Yankees’ fans harp upon the team’s offense. Historically, the Bronx Bombers have been a team defined by the strength of its bats, so when the lineup underperforms those high expectations, it becomes easy to point the finger at the offense. Having said that, just because the offense hasn’t been a weakness doesn’t mean there isn’t reason for concern. Although the Yankees’ offense is still very strong when compared to the rest of the league, it might not be good enough to overcome the team’s underperforming rotation. That’s why the Yankees biggest concern shouldn’t be the number of home runs hit by its lineup, but instead the amount allowed by its starters.

Off to watch the Nomad Yankees visit the Mud Hens tonight.

Yeah, I don't see a problem with hitting homers. Giving them up, however, that's an issue. And Phil Hughes going tonight isn't settling any nerves on that count.

Russell Martin was quoted last night as saying that it seemed like guys (his teammates) were trying to hit three-run homers with no one on. Are they all just trying to hit homers no matter what the situation? It just seems like they're really bad at hitting with runners on base because many guys don't change their approach. Seems to me this is something Girardi should be emphasizing more.

I myself dont agree with the 'too many homerun' argument bit.

But, in their defense, doesn't the argument go that by always *trying* to hit the homerun, the team assures they wont get other sort of hits at crucial times and it becomes all or nothing? So, logically, wouldn't your numbers actually BACK UP their argument? i.e when the team hits homeruns they win, but if they can't hit a homerun they cant win other ways because all they are trying for is the homerun?

I'm not sure what stats you would look at to disprove the above argument. Maybe something having to do with hits with risp in seasons with a lot of homeruns versus seasons with less? Dunno.

But yeah, even while I agree with you that on the whole more homeruns are better for a team, I could see where it could be argued the above stats dont demolish the other argument.

[5] The "too many HRs argument" can be based on two premises. The first is the assumption that the hitters are changing their approach (i.e., "trying")to go deep, which I think is doubtful. Most Yankees' hitters hit home runs, so they don't need to "muscle up". Considering how naturally HRs come to them, I am not sure why they would try something different. Besides, if such an approach was conducive to hitting homers, why wouldn't they do it all the time?

The second premise is that the hitters should be changing their approach by dialing back on their swings (going the other way, moving runners, etc.), but that contradicts their normal effectiveness.

The bottom line for me is the Yankees have a HR hitting team and shouldn't do anything to change their normal approach, except in rare instances. It's all well and good to play small ball, but what the first graph shows is that when the Yankees hit a HR they win a high percentage of their games. And, when they don't give any up, they win even more. What that tells me is teams' main focus should be maximizing their HR spread in any way possible.