Remember When Cleveland was the Plum? 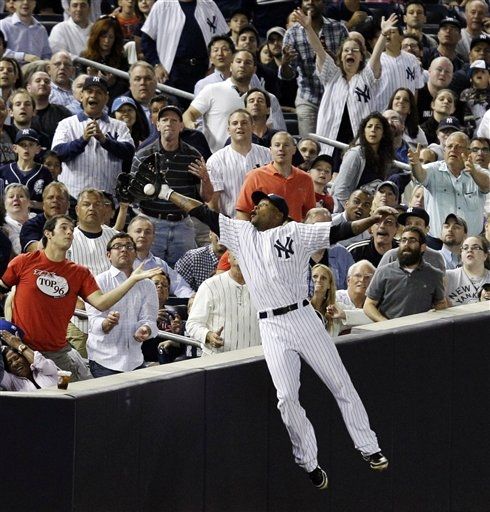 Back in the 1920s a sportswriter for the New York Morning Telegraph named John J. Fitz Gerald came up with a cute little nickname for New York City: The Big Apple. Fifty years later the New York Convention and Visitors Bureau turned that into a marketing campaign, and Gotham City will forever be the Big Apple.

When I was a kid growing up in Michigan in the 1970s, the good people of Cleveland apparently grew tired of simply providing gas for Michiganders on their way to New York City, so they started running commercials on Detroit television based on their spanking new ad campaign: New York might be the Big Apple, but Cleveland’s a plum!

After Monday night’s 7-1 loss to the Yankees, the Indians gamely showed up at the Stadium for another beating, and the Yankees obliged, starting things off in the second inning with the oddest thing — a two-out rally. With two outs and Nick Swisher on first, DeWayne Wise rifled a single to right, pushing Swisher around to third. Chris Stewart came up next and flicked a soft line drive towards third baseman Jack Hannahan. Hannahan moved to his right towards the line and directly behind the bag, but then simply dropped the ball, allowing Swisher to score the game’s first run.

I had accidentally recorded the Cleveland feed of the game, so I had the amusing pleasure of listening to announcers Matt Underwood and Rick Manning as they analyzed the play. Manning, in particular, was incensed. Even though he didn’t have the camera angle to support his opinion, he railed against third base umpire Mike DiMuro’s call, saying the ball was clearly foul. He went on to state that many teams have complained that visiting teams have a hard time getting calls in Yankee Stadium, as if this were the NBA.

Birthday Boy Derek Jeter and Curtis Granderson followed with singles to score two more runs, and Manning got progressively more depressed. At no point did he mention that Hannahan should’ve simply made the play for the out. (Somehow the official scorer did not hang an error on the third baseman.) After the commercial break, Underwood and Manning revealed that they had seen a replay from the YES camera positioned directly above the third base line, and Manning sheepishly admitted DiMuro had gotten the call right. There would be more indignation later.

The Yanks picked up a fourth run in the fifth inning on a Mark Teixeira sacrifice fly, and that four-run lead looked like more than enough because Phil Hughes was back on the beam. Cleveland has been having some serious trouble scoring runs lately, and Hughes did them no favors over the course of his eight innings. He kept the hitters off balance all night, sometimes starting batters off with a darting 92-93 MPH fastball, other times getting ahead with his 72 MPH curve ball. In all, he threw 111 pitches over eight shutout innings, striking out four while allowing just six hits and a walk.

The Indians rarely mounted anything close to a threat, but Hughes responded when they did. When the first two batters singled in the third, Hughes induced a 4-6-3 double play. After a leadoff single in the fifth, another double play. With runners at first and second and one out in the sixth, Hughes muscled up for two swinging strikeouts. After a leadoff double in the seventh, the Indians went down ground out, fly out, foul out. Or did they?

Hannahan was the last batter of that seventh inning, and he floated a high foul pop towards the point of the stands that juts out close to the foul line midway between third base and the foul pole. Left fielder DeWayne Wise drifted into foul territory, leapt over the rail in pursuit of the ball, and disappeared into the crowd. In the confusion that ensued, the spectators closest to Wise helped him up, but a fan three seats from the action suddenly bent over and produced the ball, holding it over his head for all to see. All, that is, except for that man DiMuro, who called Hannahan out even before Wise emerged from the stands. DiMuro never asked to see the ball, and Wise never produced it. He simply sprinted to the dugout with his glove closed. “What was I supposed to do, run back to left field?” asked Wise after the game. “I saw him looking at my glove so I just got up, put my head down, and ran off the field.” Makes perfect sense.

Needless to say, the Cleveland announcers were at a complete loss. They dissected the replay as if it were the Zapruder film, asking their viewers to watch over and and over again as the ball struck Wise’s glove — pushing it back.. and to the right — before disappearing and then reappearing almost ten feet away. It was some magic pop up.

Alex Rodríguez jacked a home run in the bottom half, widening the lead to 5-0, Hannahan, still upset about being robbed in the top half, got himself kicked out as he headed back to the dugout. This led to more from Underwood and Manning, who couldn’t believe DiMuro would run Hannahan. “Hey, you missed the call. Just own up to it. Just say, ‘Hey, you know what? I’m sorry. I didn’t see it. I didn’t see him drop the ball.’ Instead, he throws him out of the game for telling him exactly what the truth was, which was [he was] wrong.” Makes perfect sense.

The Yanks added a sixth run in the bottom of the eight, and Cory Wade came in to pitch the ninth and made a mess of things, coughing up four runs, three of them on a home run by Hannahan’s replacement, José López. Sound and fury, signifying nothing. Rafael Soriano came in to throw two pitches for the final out, and before you know it his shirt was untucked.

great write-up Hank, and didn't know about the plum. Sorry, Cleveland, we still owe ya for the midges!

[0] "..Cleveland's a plum!"..the city actually paid some marketing firm for that one?
I remember driving through Cleveland on my way back to NYC from Chicago..the only thing I wanted to see was the Mistake By The Lake.

Back and to the right...great stuff. The last two paragraphs of your write-up were narrated in my head by a bizarre Kevin Costner/Jerry Seinfeld hybrid thanks to that comment.

[0] In some ways I'm glad today is a day game and I'll miss it. I'll only get tin Indians feed, and their broadcast team alternates between boring and stupid.

[1] The midges! As I was watching the game and listening to the whining, all I could think was that one bad call in June could never make up for the October midges, and that idea was supposed to figure into my recap. But alas, apparently the midges had flown away from me by the time I sat at the keyboard...

I am missing these games b/c I am on vacation but keep checking the game threads and recaps. Good stuff as always.
"I LOATHE Keith Hernandez. He RUINED our day!"

Shite. The Yankees put CC on the 15 day DL with a groin injury. Does that mean Freddie is back in the rotation?