Without much fanfare, Curtis Granderson established a new single season franchise record for most strikeouts by a Yankee batter. Ironically, Granderson’s 170th strikeout came against Aaron Cook, whose 1.98 K/9 rate is the lowest among all pitchers with at least 80 innings. Otherwise, the centerfielder’s prolific accumulation of strikeouts hasn’t been surprising. After all, the record he broke was his own.

Most Strikeouts, Total and Rate, in Yankee History, Since 1901

In addition to holding the new Yankee record for most strikeouts, Granderson’s K rate of 28.4% also ranks first among all qualified seasons in franchise history, surpassing the previous high of 26.3% set by Jesse Barfield in 1990. However, the left handed slugger hasn’t been the only Yankee with a propensity for striking out. Nick Swisher’s rate of 23.5% would also rank among the top 10, and as a team, the Bronx Bombers have struck out more frequently than at any point in their long history. 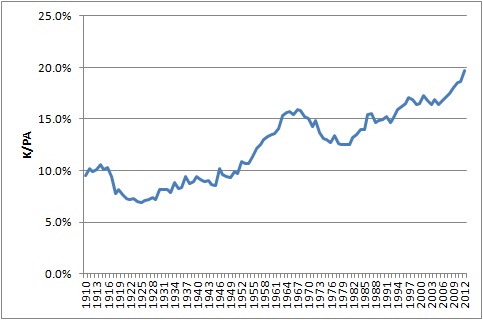 Note: Rate is a percentage of plate appearances.
Source: fangraphs.com

The Yankees’ record setting strikeout pace extends to both sides of the ball. The pitching staff’s 8.17 strikeouts per nine innings currently represent the highest total in franchise history, besting the 7.85 figure posted in 2001. Although no pitchers are in line to break a record on their own, C.C. Sabathia’s K/9 rate of 8.82 is good for fourth on the team’s all-time list (qualified seasons only). 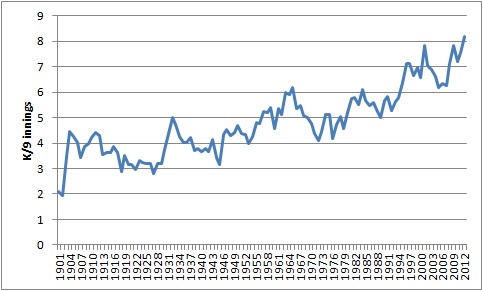 Strikeouts have not only been popular in the Bronx, but across the major leagues as well. In fact, the league-wide K rates this season have been the highest recorded since 1901. Since the early 1980s, strike outs have been on gradual increase throughout the game, but that trend has accelerated in the last five years. As a result, the Yankees’ record setting rates don’t really stand out when compared to the league leaders. On offense, the Bronx Bombers actually have struck out below the MLB average of 19.7%, leading to a ranking in the bottom third of the lead. On the pitching side, the Yankees do rank third in the American League and sixth in the majors, but the team’s punch out percentage isn’t far above the norm. 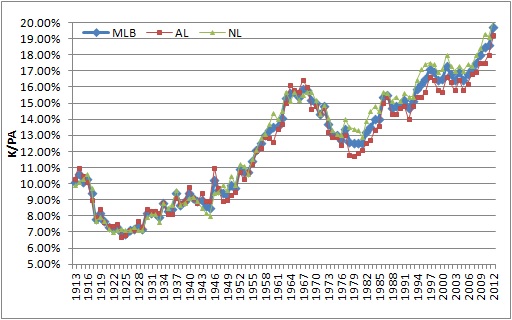 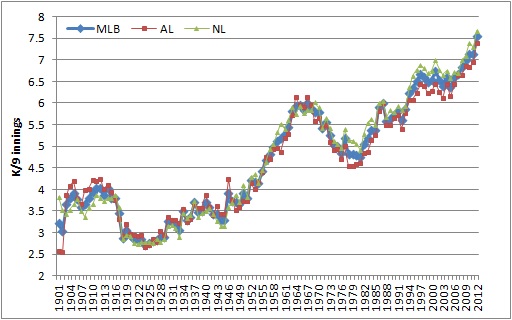 There are lots of theories that could explain the accelerating increase in strikeouts. PED withdrawal, a new crop of young, strong-armed pitchers, umpire evaluation technology that has forced an expansion in the strike zone, and bullpen specialization are theories that either by themselves or in conjuction could be responsible for the upward trend. Regardless of the reason, baseball is the midst of the golden age of the strikeout, so players like Curtis Granderson shouldn’t hang their heads in shame. Besides, nothing beats a nice cool breeze in the summer anyway.

A contributing factor could be on the other side of the ball: offensive philosophy has changed over the last several years, I think. Strike outs are no longer seen as so bad, and (becasue of increased emphasis on OBP and taking pitches) they are increasingly tolerated so long as the hitter gets on base and, ideally, hits for power. What we're seeing is a general move toward more "three true outcomes."

[1] Yep, you've convinced me on this. And it's also possible (I think probable, but I don't have an argument for that) that there are changes in swings that increase the chance of getting a double, say, but also the chance of striking out, and that this is now considered a better trade-off than it once was.

One thing you (William) don't mention is that today's wisdom tells us that striking out is not so bad, for a batter, but also that it is particularly good, for a pitcher. That is, if you want a stat that gives you a measure of underlying ability, with predictive power for the future, etc., then you should be looking at pitchers' strikeouts, but you shouldn't be looking at batters' strikeouts.
This is a really weird fact. I don't know what to make of it.

[1] [2] That explains the general trend, but I am not so sure it covers the recent spike.

[2] The logic behind the divergence is K are a fielding independent component for pitchers, while for batters, they're just another way to make an out. While I agree that Ks are more predictive for pitchers, I don't think they're an irrelevant consideration for hitters. More simply, if allowed to choose between two hitters of comparable ability, I'd take the one with fewer Ks.

Might be interesting to graph the Yanks' offensive K rate over time against their OBP or OPS.

I wonder if it might show that offense has increased alongside the feast or famine counterpart, the strikeout.

[3] But that doesn't explain it. The question is, how can a given strikeout be particularly good for a pitcher, and not particularly bad for the batter he just struck out? If batters struck out more, would that mean pitchers were doing better but batters were not doing worse? This is pretty obviously impossible...

But anyway, just about game time...

[5] The value of the outcome is the same for both, but that doesn't mean they have the same predictive implication.

Also, fewer strikeouts do not correlate to more run production in an open environment, but I was referring to a situation in which all else is kept equal.