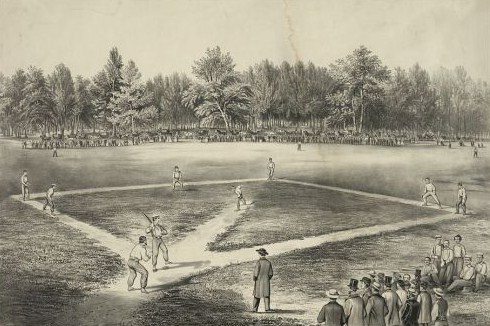 After 14 straight losing seasons, the Baltimore Orioles finally clinched a winning campaign earlier in the week. Meanwhile, the Pittsburgh Pirates, who are sitting on 19 consecutive campaigns below .500, are desperately trying to do the same. Each team’s long run of futility has drawn a lot of attention, but on the flip side, the Yankees’ string of winning seasons has gone unnoticed. 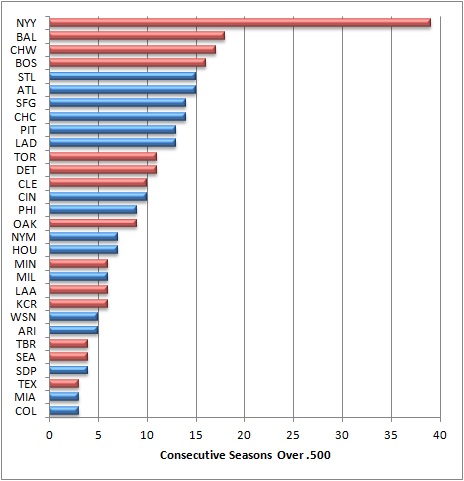 Most people take the Yankees’ success for granted, but with another winning season in the bag, the team now has 20 straight years with an above .500 record. During that span, the Bronx Bombers have compiled a regular season winning percentage of nearly .600 to complement five championships, seven AL pennants, and 12 division titles. The team’s recent struggles heading down the stretch in 2012 have obscured the franchise’s impressive run, but, nonetheless, the Yankees remain in the midst of a golden age.

The Yankees’ current stretch of 20 consecutive winning seasons is the second longest streak of its kind in baseball history. However, it’s a distant second. From 1926 to 1964, the Bronx Bombers reeled off 39 straight winning campaigns, including 18 championships, 25 pennants, and a victory in over 62% of all regular season games. No wonder the Yankees easily lead the majors with the highest percentage of winning seasons. 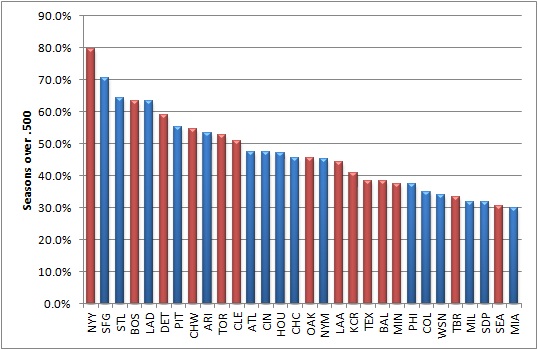 Aside from the Yankees’ two winning season streaks of 39 and 20, the Baltimore Orioles boast the next longest stretch, which lasted for 18 seasons from 1968 to 1985. The best run put forth by a National League team is shared by the Atlanta Braves and St. Louis Cardinals. The Braves enjoyed 15 straight winning seasons from 1991 to 2005, while the Cardinals run lasted from 1939 to 1953. 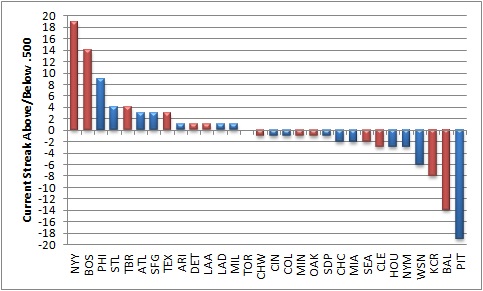 Note: Data is as of 2011
Source: Baseball-reference.com

Among active streaks, the Yankees’ 20-year run is now double the combined total of the next two closest teams because the runner-up Red Sox’ 14 seasons in a row was snapped just two years short of the franchise record. The Cardinals and Rays, who each enter today’s action with 79 victories, are working toward five straight winning seasons, while the Rangers, Giants, and Braves have already notched their fourth consecutive above .500 campaign (with the Tigers also knocking on the door). Meanwhile, should the Pirates join the Orioles on the winning side of the equation, the Royals will take over the lead for the longest streak of losing seasons with nine.

Will this be the year the Pirates finally join the ranks of the winners? How much longer can the Yankees keep their current streak intact? When each team started their current streaks in 1993, the Yankees were coming off their franchise-high fourth straight losing season, while the Pirates were riding three consecutive division titles. In other words, the fortunes of any franchise can turn suddenly, so if there’s one lesson to be learned, fans should never take their team’s achievements for granted. Diamonds may be forever, but in baseball, success on the diamond is not.

Wow, I hadn't thought about their success in these terms. Thanks for the knowledge, William. This is great.

I've been lowering expectations for the 4 yr old on the Pirates for almost 2 months now. I don't know what I will do if those guys can't pull off 7 wins out of their last 14 games.

[2] A road trip could help? Just know there is character building in the fandom of losing teams. I truly became aware of all that is baseball in 1963. Felt the disappointment of the 1964 World Series, and followed the Yankees during the modern nadir of their existence. The pride for the Yankees tempered by the futility of 1965-1975. He will figure it out.

The Yankees will from now on, have plus .500 seasons (negating Armageddon) . The value of the franchise (mostly thanks to the Yes Network, and their marketable name) allows for salaries that will always bring a winning team to NY.