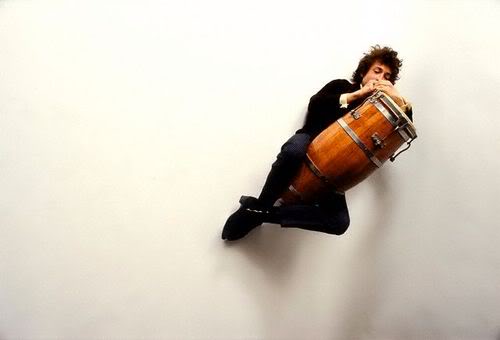 Someday, no doubt, when the keepers of the tower officially allow that Bob was one of the two or three greatest American artists of the second half of the twentieth century, Dylanology will be boiled down to a standard three credits, a dry bonepile of jewels and binoculars to squeeze in between the Yeatsology and Whitmanology. You might even be able to major in Dylanology, hand in papers on the interplay between Deuteronomy and Dock Boggs in Bob’s middle period. But for now, even as the Dylan economy grows each day (a mint copy of the rare stereo version of Freewheelin’, which contains four extra songs, goes for $20,000), Dylanology, the semi-sub rosa info jungle of writers, fanzine publishers, collectors, Web page keepers, DAT tapers, song analyzers, old-girlfriend gossips and more, retains a bracing hit of democratic auto-didacticism, a deep-fried aroma of overheated neocortices.

…Rock is full of cults, but nothing — not collecting the Beatles, not documenting Elvis — rivals Dylanology. Back in his dark-sunglasses days, Dylan might have been the coolest, but Dylanology is not about cool. Neither is it a hobby, a fleeting affectation or indolent lord-it-over-you taste-making to get girls, like in High Fidelity. Dylanology is a risk, a gamble, a spiritual declaration, a life choice, and if you don’t believe it, ask those real Weathermen, erstwhile college students who took the drama of “Subterranean Homesick Blues” to heart, maybe too much. A year after Rubin Carter addressed the United Nations, several of those forgotten revolutionaries continue to rot in jail, so ask them which way that wind blows. But this is how it is with Dylanology. To be a Bobcat is to acknowledge the presence of the extraordinary in your midst, to open yourself to its workings, to act upon it. In a world of postmod ephemera, this is a solemn bond.

In turns, a real folkie, a real rocker, a real lover, a real father, a real doper, a real shit, a real Christian, a real Jew, a real American from a real small town come to a real big town with real dreams and little false modesty, Dylan, big-tent preacher of millennial concerns both sacred and profane, has never offered less than authenticity to his variegated flock, no matter what peculiar ax they might grind. With Bob, you may feel betrayed, bitterly disappointed, but you never think it’s a hustle. Because he has always been so willing to lay his heart on the line, so are we.

Is it weird that sometimes I feel like I enjoy READING about Bob Dylan way more than I enjoy actually LISTENING to Bob Dylan?

Well, there is just so much to listen to...but I can see that.

[2] I like him a lot, don't get me wrong, but I pick my spots. I love the bootlegs, Rolling Thunder era and such. Thought his book and the Greil Marcus stuff was brilliant, so are the two big documentaries.

Maybe it's because I'm a Springsteen nut, I only have room in my life for one borderline obsessive musical following.

[2] That's one of the things that keeps it so fresh to my ears - there's SO much stuff and its so varied. Listening to 1963 Bob is a whole universe away from 1975 Bob, and both are found in 1997, but it's still its own animal, and so forth and so on. Endless rewards to be reaped. That said, I go through my occasional heavy Bob phases and then lay back a bit.

I'm a HUGE Dylan fan. He's very influential on me and an important part of my immediate family.

I basically have every CD ever released and enjoy listening AND reading about it all. I, too, go through heavy phases where it's all Bob and then let it sit for awhile. But as a professional musician with a massive album collection, I generally do this with all artists/styles/eras.

I've been on a couple of big Dylan kicks in recent times. Still can't believe "Red River Shore" was left off Time Out Of Mind, but am very glad it was included on the excellent Tell Tale Signs - Bootleg Series Vol. 8.

5) When I was in between jobs I was on of those late-night kids staying up with my finger on the pause button, taping those shows.

[6] Hey, he left "Dignity" off of Oh Mercy! and "Blind Willie McTell" off of Infidels, so you know, the guy's mercurial that way.

[6][8] Not to mention "Series of Dreams" being left off of Oh Mercy!, too. It would have been the perfect title track for that album.