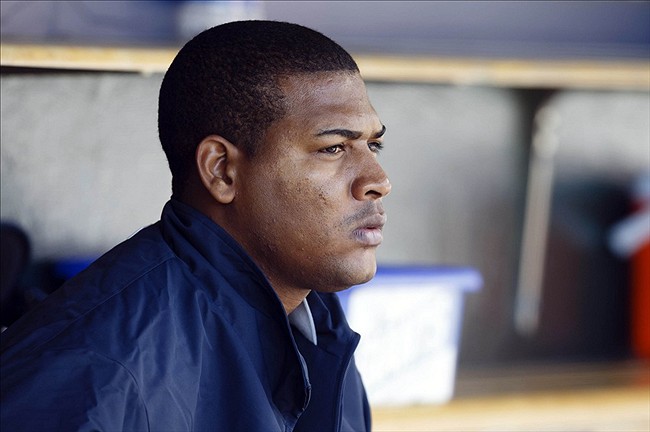 Ever since the second half of 2012, Nova says, “I’m just not repeating my delivery,” and now, according to PitchFx, he’s throwing 20 percent fewer strikes than in 2011.

Members of the organization say Nova has unconsciously dropped his arm slot to near three-quarters level. Other believe Nova’s front (left) shoulder is sabotaging his delivery, flying open too quickly, not unlike the flaw that ruined A.J. Burnett’s career in the Bronx.
Pick your theory, but the effect is the same. Chris Stewart said, “[Nova] was missing everywhere. I don’t think he had a feel for any of his pitches.”

Nova took no offense to such a harsh assessment. He’s the first to admit Stewart was right, and that sooner or later, the long, slow descent has to end.

Curious what the pitching coach is doing here.

[1] I was about to say the same thing. Players still gotta play, but isn't this kinda what Rothschild is getting paid for?

[1] "You can lead a horse to water, but you can't make him drink." Larry could be in his dreams, but it's still up to Nova to put it into practice. My Fair Pitcher (with sliders instead of slippers)...

Just how slow does Vidal Nuno throw? A 26 to 2 K/BB ratio in AAA so far looks pretty amazing in pixels.

Hum, so he lost his pitching around the time Melky C got caught on 2012.

I say exchange him for Nuno or Phelps. Make him start in AAA until he pitches consistently well for 2-3 months.