It Gets Wet Early Out There 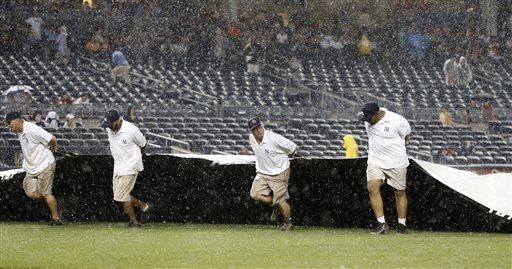 Just two weeks ago the Yankees were the surprise story of the 2013 season as they defied all odds and expectations and put together one of the best records in baseball, injuries be damned. Suddenly they’ve lost seven of their eight games and nine of their last twelve, and there could be any number of reasons for the slide.

This could be a simple regression to the mean. There’s no way a team can sustain injuries to Alex Rodríguez, Derek Jeter, Mark Teixeira, Curtis Granderson, Kevin Youkilis, and Andy Pettitte — not to mention Francisco Cervelli, Eduardo Nuñez, Joba Chamberlain, and Chris Stewart — and expect to be competitive for 162 games. If you believe this theory, then you believe the collapse was due.

Or this could be a case of a team relaxing when it shouldn’t. After pedaling so hard for so long to keep things going while they waited for those injured players to get healthy, there would have to be a tendency to relax once some of the marquee names started coming back. But if you looked at the lineup that Joe Girardi sent out on Sunday night, you saw a nine that wouldn’t strike fear into the average American League pitcher. When the opposition is sending an elite pitcher to the mound, as the Red Sox were in Clay Buchholz, well, things can get ugly.

Hiroki Kuroda has been the most consistent Yankee starter over the past two seasons, and early on he appeared to be equal to the challenge of facing Boston’s ace as he cruised through the first three innings before finding trouble in the fourth. The Red Sox come up with something new every year, which is nice of them, so my feelings for them don’t get stale, and this year’s gimmick is the beard. Ryan Gomes, Mike Napoli, Ryan Dempster, and Dustin Pedroia are all sporting them, probably as some type of Brony ritual. Anyway, the beards came out in force in the top of the fourth as Pedroia singled to lead off the inning, went to third on a single by David Ortíz, then scored on soft groundout from Napoli.

The Yankee offense was already done for the night, having notched a single from Ichiro in the second and another from Austin Romine in the third, so it didn’t really matter that José Iglesias homered in the fifth and Big Papi hit one in the sixth. (It might matter that Ortíz posed a bit after his blast, making with his signature bat toss, then pointing into the Boston dugout as he rounded third. Why he gets away with this shit, I’ll never know. I don’t hate Ortíz, but I hate that people think it’s okay for him to act like a jackass.)

And really, that was about it. The rains came two batters after Ortíz, forcing a long rain delay. Boone Logan took the mound when the tarp came off, but the rain came back after four minutes and that was that. Red Sox 3, Yankees 0. (One interesting note. After Logan got the final out of the top of the sixth, Andrew Miller jogged onto the field to take over for Buchholz. But since the game was called before he was able to throw a pitch, he only gets credit for a game played, not a game pitched, and Buchholz gets credit for a complete game and, I assume, a shutout.)

So where do the Yankees go from here? In just a week they’ve gone from first place to a tie for third, and there’s a certain air of desperation in the Bronx. The Cleveland Indians come to town tonight, and they might be just what the doctor ordered. The Yanks have beaten them three out of four games this season, outscoring them 32-8 in the process. It sure would be nice to see the Score Truck show up on Monday night.

Where does this come from:

"...and there’s a certain air of desperation in the Bronx."

Really? Doesn't seem like it. It seems like they are playing to their limited ability, no more, no less.

And on Ortiz, I agrees. I am not a fan of violence, but Ortiz needs to get brushed back in a big way.

[1] responding late to a comment on last night's thread:

He has 3 more hits than Ichiro, although a ton more walks. He has 3 less homers and 4 less RBI than Wells. Unless his 26 walks count as "hitting." Of course his OBP and OPS are a lot better than Ichiro's, but just a bit better than Wells'.

Brony I can deal with. Score truck. I don't know.

[1] I know where it comes from. Author spot on. Giving the amassed group of players no one wanted, thought were washed up or never made it, they produced for a few months. What Girardi had to do with it, I don't know, but who cares.

As for playing to their limited ability, no one knows what that looks like until you see it. Limited means different things to different people. From my catbird seat, they look woeful.

What gets me is the number of strikouts. They don't even hit solid fouls. Everyone counts on the returning crew to improve productivity, but the two big guys haven't played since the playoffs and neither has really explained the nature and extent of the injuries, treatment or rehab.

We also will have to live with A-Rod telling us he is playing himself back into form; Techiera tellin us he doesn't hit well in the Spring; and Jeter doing his I am the coolest thing going and know how to answer any question you ask without telling you squat.

But the best point about the Waddle's post notes that the Sox lead, but with whom. The AL East doesn't look as strong as people predicted, which could be another reason the Yankees started so strong. I still say a .500 season would be a victory.

[3] The team has overachieved, no doubt, but I don't see how you can sense or see "an air of desperation." Who's desperate? Not Girardi. Not Cashman. (Although, I wish he was a little more nervous). I don't see it in the players. Maybe Hank has privy to things behind the scenes, that I don't.

[2] But how much better would he make this team? That's what we are talking about, right. The two "hitters" we lost or gave up, are not exactly tearing up the league. Aside from his Stadium antics Ibañez is batting about .220.

I don't see the team being any better with Swisher and Ibañez instead of Wells and Ichiro (without Granderson). But who knows.

[5] Agreed. Am I wrong for saying they should knock his ass down?

I mean, Kuroda seems like a straight shooter. He's no Fernando Rodney. Well, no Yankee is....so maybe that's the issue. To be better, we have to be better.

[6] I said nothing about Ibañez--frankly Ibañez was pretty bad last year despite his heroics I only picked Swisher out because he was a convenient name, and moreover the Yankees could have made a run for him but consciously chose not to as part of their cost-cutting policy.

A policy that somehow involved signing the corpse of Ichiro to a two-year contract, and then signing the craptastic Vernon Wells to be the everyday left fielder for two years.

I digress. How much better would the team be with Swisher than Wells or Ichiro? Who knows. Probably not much, since one player never makes that much of a difference. Rather, my comment pointed to the obvious reality that the team needs hitting. The organization has made, it seems, a conscious effort to focus on pitching in its player development, and the few bats it has developed in MiL have been traded away. And now that has come back to haunt them.

The team is struggling because of injuries, and to some degree there is nothing you can do about that. On the other hand, it was pretty optimistic to hope that team could continue to lean on aging and declining stars like A-rod and Jeter (whom I love) and Teix, or the ever flaky and inconsistent (though loveable) Granderson. It is, moreover, appalling that THE NY Yankees don't have anything in MiL as good or better than Vernon Wells. That superstar GM Cashman and the biggest payroll in MLB can't do better than signing surviving members of the 2003 All Star Team to plug gaps created by injuries, injuries that should have been at least partially foreseen.

Signing Wells was bad. On this point there is no debate. Being in a position where it could even be plausibly argued that signing Wells was the best option is terribly bad. No debate there, either.

[6] The two "hitters" we lost or gave up, are not exactly tearing up the league.

Ibañez stinks. On the other hand, as I pointed out, Swisher is hitting 132 OPS+. By comparison, the best regularly-starting hitter on the Yankees, Cano, is hitting 135 OPS+. Swisher may not be "tearing up the league," but he is having a mighty fine season.

Could he have been signed for Ichiro money?