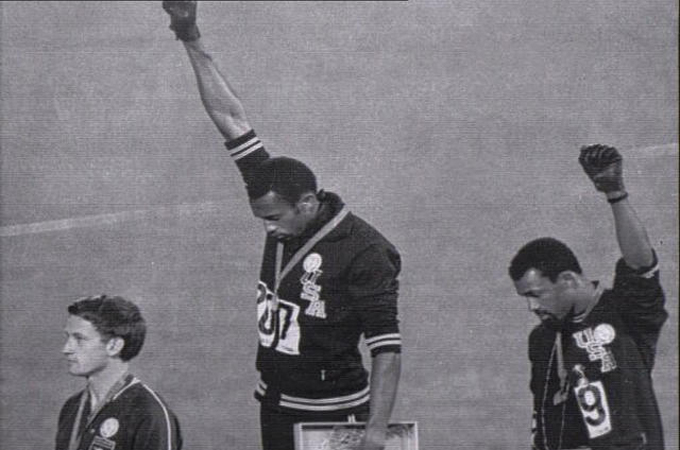 The Library of America presents Smith’s finest work in the new collection, American Pastimes: The Very Best of Red Smith. It is available now and a must-read for all sports fans, young and old (and an ideal gift for Father’s Day). This week, with permission from Smith’s family, we’ll reprint a Red Smith column every day to offer you a sample of what he was all about. Today’s column is “Night for Joe Louis” which ran on October 19,1968 the day after Tommie Smith and John Carlos bowed their heads and gave a Black Power salute at the summer Olympics.

The four-hundred-meter race was over and in the catacombs of Estadio Olimpico Doug Roby, president of the United States Olympic Committee, was telling newspapermen that he had warned America’s runners against making any demonstration if they should get to the victory stand. A fanfare of trumpets interrupted him.

In stiff single file, the three black Americans marched across the track. All of them—Lee Evans, the winner; Larry James, second, and Ron Freeman, third—had broken the recognized world record. Rain had fallen after the finish and, although it was abating now, the runners wore the official sweatsuits of the United States team, plus unofficial black berets which may or may not have been symbolic.

Each stopped to enable John J. Garland, an American member of the International Olympic Committee, to hang the medal about his neck. Then each straightened and waved a clenched fist aloft. It wasn’t quite the same gesture meaning, “We shall overcome,” which Tommie Smith and John Carlos had employed on the same stand after the two-hundred-meter final.

Lord David Burghley, the Marquis of Exeter who is president of the International Amateur Athletic Federation, shook hands with each, and they removed the berets, standing at attention facing the flagpole as the colors ascended and the band played the Star-Spangled Banner. Smith and Carlos had refused to look at the flag, standing with heads bowed and black-gloved fists upraised.

Evans, James, and Freeman stepped down, and out from under every stuffed shirt in the Olympic organization whistled a mighty sigh of relief. The waxworks had been spared from compounding the boobery which had created the biggest, most avoidable flap in these quadrennial muscle dances since Eleanor Holm was flung off the 1936 swimming team for guzzling champagne aboard ship.

The four-hundred-meter race was run Friday, about forty-eight hours after Smith and Carlos put on their act and 1.2 hours after the United States officials lent significance to their performance by firing them from the team. The simple little demonstration by Smith and Carlos had been a protest of the sort every black man in the United States had a right to make. It was intended to call attention to the inequities the Negro suffers, and without the aid of the Olympic brass might have done this in a small way.

By throwing a fit over the incident, suspending the young men and ordering them out of Mexico, the badgers multiplied the impact of the protest a hundredfold. They added dignity to the protestants and made boobies of themselves.

“One of the basic principles of the Olympic games,” read the first flatulent communiqué from on high, “is that politics play no part whatsoever in them. . . . Yesterday United States athletes in a victory ceremony deliberately violated this universally accepted principle by using the occasion to advertise their domestic political views.”

Not content with this confession that they can’t distinguish between human rights and politics, the playground directors put their pointed heads together and came up with this gem:

“The discourtesy displayed violated the standards of sportsmanship and good manners. . . . We feel it was an isolated incident, but any further repetition of such incidents would be a willful disregard of Olympic principles and would be met with severest penalties.”

The action, Roby said, was demanded by the International Olympic Committee, including Avery Brundage, president, and by the Mexican Organizing Committee. They are, as Mark Antony observed on another occasion, all honorable men who consider children’s games more sacred than human decency.

Soon after the committee acted, a bedsheet was hung from a sixth-floor window of the apartment house in Olympic Village where Carlos has been living. On it were the letters: “Down with Brundage.”

There were, of course, mixed feelings on the United States team. Lee Evans was especially upset, but when asked whether he intended to run as scheduled, he would only reply, “Wait and see.”

“I had no intention of running this race,” he said over the air after taking the four-hundred, “but this morning Carlos asked me to run and win.”

Said Carlos: “The next man that puts a camera in my face, I’ll stomp him.”

Went to White Plains HS with Larry James. What an athlete. Coincidentally, we had the first black vice-principal while he was there, a wonderful man by the name of Daniel Woodard (who first had a brief career with the NFL Browns). Mr. Woodard was in charge of discipline at a time (mid 60's) when racial tensions in the mixed school were quite high. When the events of this article happened, I was more excited about his race results than the "political" gesture.
Smith's fabulous article is such a stark reminder that politics have never been separate from the Olympic Movement (Marty Glickman in Berlin ring any bells?)

1) Thanks for this. Can you tell us the story of Glickman in Berlin, please?

“One of the basic principles of the Olympic games,” read the first flatulent communiqué from on high, “is that politics play no part whatsoever in them"

After reading this it's important to remember that Brent Musburger called Carlos and Smith "black skinned stormtroopers" in the Chicago American right around the same time this was printed.

Columns like Smith's show that, thankfully, in the heat of the moment not everyone in the media completely embarrassed themselves.

4) Do you have a citation for that Musberger quote?

Glickman was an All-American member of the mile relay team at the Berlin Olympics. He was displaced from the 4x400 relay team because he was Jewish; while there is some controversy about the story, Glickman's claim was eventually confirmed.