Once Upon a Midnight Dreary While I Pondered Weak and Weary 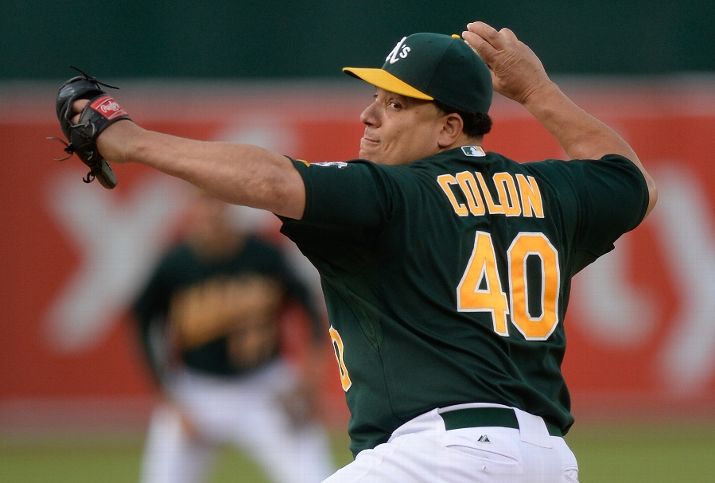 This was a cruel game to watch if you were on the east coast (or if you were working with a serious sleep debt on the west coast, like me). Bartolo Colón was on the mound for the A’s, but he was far from his usual strike-throwing self. He had come into the game having yielded only six walks all season long, but he issued two in the first inning alone as he loaded the bases with one out. Even though Kevin Youkilis and Lyle Overbay popped out to end the threat, it still felt like an effective inning. Colón had thrown 27 pitches, and he didn’t have his typical command. With CC Sabathia on the mound for New York, surely it would be good night for the Yanks.

The first warning that the evening might not go as planned came two pitches into the bottom of the first. Coco Crisp lashed a Sabathia pitch into the seats in left field, and the A’s were up 1-0. It didn’t seem fair, to be honest. The Yankee hitters had worked so hard and been so methodical in the scoreless top half, and here Crisp walked into a fat pitch and Oakland had the lead. CC needed seven pitches to retire the next three hitters, and order was restored.

In the top of the second, Sabathia was simply unlucky. If you just read the play-by-play of this inning, you probably imagined that Derek Norris lashed a long double off the wall in right field to score Josh Reddick all the way from first, but that’s not what happened. Reddick sat on first base with two outs, so he was able to take off immediately as Norris popped the ball out towards right field. The ball was headed for no-man’s land as Mark Teixeira, Robinson Canó, and newbie right fielder Overbay converged. It landed untouched in front of Overbay, who bobbled it a bit, allowing Reddick to score just ahead of his throw. As Michael Kay noted on the telecast, it was the first time that the Yankees had paid a price for putting Overbay in the outfield. It was a ball that Ichiro would likely have caught, and even if he hadn’t, he certainly would’ve held Reddick at third. But Ichiro watched the play from centerfield, and A’s were up 2-0.

Derek Norris struck again in the fourth. The A’s had runners on first and second with two outs when Norris came to the plate. Sabathia’s first pitch was a lazy curve ball that seemed to bend right into Norris’s wheelhouse, and Norris sent it deep into the night over the high wall in left center. That 2-0 lead built on a lucky homer and a botched play by a guy playing the outfield for the fourth time in a decade was suddenly a five-run deficit. I fell asleep on the couch soon after this, so I didn’t see Oakland’s sixth run score on a Sabathia wild pitch in the sixth, but that’s probably for the best.

Colón, of course, cruised through his six innings. After that scare in the first, the Yankees never threatened, never even made him sweat. I simply don’t understand how this guy can still be this good. (At this point, the working title for this post was “Colonoscopy.”) When I woke up five hours later and picked up the game where my wife had clicked it off in the top of the eighth, Colón was gone, and suddenly the Yanks decided to make the night interesting. Brett Gardner, reigning A.L. Player of the Week, continued his hot hitting as he led off the inning with his second hit of the night. Canó then singled him to third, and when Teixeira followed that with a single of his own, the Yankees were finally on the board. Two outs later pinch hitter Vernon Wells somehow squeezed a line drive between short and third to score Canó, and it was 6-2.

When Chris Stewart singled with one out in the ninth, there was a spark of hope. When Canó followed that one out later with a double grounded down the left field line to put runners on second and third, that spark had grown into a flame large enough to force Oakland closer Grant Balfour into the game, a small victory in and of itself. Teixeira fell into a 1-2 count but roped a line drive just inches over Jed Lowrie’s leap at second to plate both runners and bring Travis Hafner to the plate as the tying run.

Hafner also got behind 1-2, but he stroked the next pitch to deep left field. The Oakland outfielders had all been standing on the warning track, and I remember thinking that they were playing ridiculously deep, giving away so much of the field, but it turned out they were positioned correctly. Left fielder Seth Smith only had to spring along the track towards left center where he leaped at the wall and caught Hafner’s ball for the final out of the game.

Nice recap, Hank, thanks. Bummer of a game for the Yanks.

That was a lot easier to read than it probably was to watch. Much obliged.

I love CC, so when he loses it feels like two losses. Given my 5am wakeup, watching this game would have felt like four losses.
The math is correct, but check it if you must.