He Who Would Be King 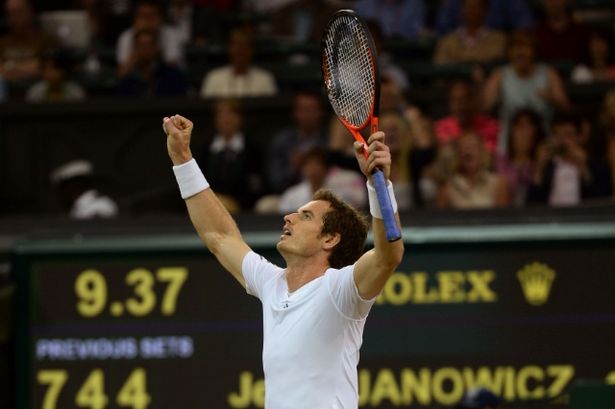 Will this be the day that Andy Murray finally finds his destiny and brings home the Wimbledon title for the British masses? (It’s probably been at least a decade since I really cared about tennis, but I have to admit that I’m rooting hard for him.) Early on it certainly looked like it would be Murray’s day, as he jumped out to a two-set and lead and broke the Joker in the first game of the third — then looked to be on the verge of breaking him again two games later — but the tide just might be turning. Djokovic won four straight games to take a 4-2 lead in the third set.

Nothing better than a little drama in the Wimbledon championship.

How quickly things can change in a tennis match. Suddenly, Murray is two points away.

Good for Murray. His game has improved tremendously.
Totter off to all those Brits though.

Like I said, I'm not much of a tennis fan, but I've been trying to come up with a comparison in American sports. All I can think is this -- a young kid grows up in Chicago and learns how to pitch. He becomes a dominant high schooler, projects as a future ace, and is drafted by the hometown Cubs. He rockets through the farm system and eventually arrives at Wrigley Field, even better than advertised. Kerry Wood and Mark Prior are forgotten. Eventually he develops into the best pitcher in the National League and pitches the Cubs into the World Series. He's on the mound for Game Seven, in Chicago, and he gets the win with a 1-0 shutout, striking out the side in the ninth. I think that's close.

Congratulations to the Scotsman!

I'm not a big Murray fan but shit, 77 years? Good for him and for his country. Djoker looked spent. He just had nothing today.

Folks seem pretty happy here in the Midlands.
It doesn't matter like football does, though, is my impression.

I had the good fortune to be in London during Wimbledon last year. The pressure on him was immense. Fortunately the World Cup was on at he same time and the Olympics were around the corner so it went away quickly. Now if a Scot could win the Open it would be a real doubleheader.

I'm not a big Murray fan but shit, 77 years? Good for him and for his country. Djoker looked spent. He just had nothing today.

Funny, my impression was that if Djokovic could have broken Murray in the 3rd, he would have been favored to complete the comeback. Murray looked completely wasted by the end ...