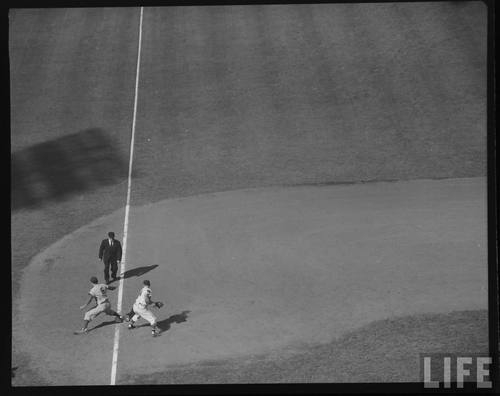 Light day of blogging here at the Banter. We’ll be back for the game tonight.

Meanwhile, listen to this novelty record and smile.

Congrats to The Green Man for his submission and explanation of the correct answer for Where & When #2:

"Let's see, the Times Building was completed in 1904, and the Astor Theatre opened in 1906. What else...the Garford Motor Car Co. of NY was previously Studebaker-Garford until 1910, but it could have gone by that name before. The real clue is that the Astor Theatre is playing Paid in Full which ran from February of 1908 to July of 1908.

So I would say Spring/Early Summer of 1908 with the photo take at 9:17 AM according to the street clock on the right."

Kudos for discovering the secret within the clue I hinted toward; the Astor Theater was built in 1906 as part of the Astor Hotel, moreover the billing included the show "Paid in Full" which had debuted in February that year. And very nice for noticing the time of day; 9:17 am. Because you were the first with the answer, you win a Root Beer (1 point)

Honorable Mentions also go to the RI Yank, Eric McCauley, and Larry Roibal for also submitting correct answers; you each get a cream soda (1/2 point) >;)

The building in the center of the picture is indeed the (at the time) new Times Tower, built btw 1903-1904 and new base of operations for the New York Times for what turned out to be less than a decade, though they did retain ownership of the building for more than half a century. The history of the building is quite interesting, really; lots of ownership change, how it became more or less a profitable billboard and how it became the host of one of the greatest celebrations on Earth year after year (that was news to me.)

Also, many mentioned Times Square for what it was formerly known as, Longacre Square, which also has an interesting history, but note that Longacre Square was officially renamed Times Square by Mayor George McClellan Jr. (son of Civil War Gen. George McClellan, who later became governor of New Jersey) in 1904 at the behest of NY Times publisher Adolph Ochs. I would have also accepted Longacre Square as part of the answer, as it probably took some time before many people in that time and region accepted the name; much as how we currently balk at the renaming of certain bridges and highways in and around the city...

Game #3 starts on Monday, and as I continue to tweak the presentation and regulations, keep the submissions and suggestions coming. If you have a picture you'd like to present as a challenge, contact me at cixposse@gmail.com with your name and screen name, your challenge with clues and your pic/photo credit. Make sure the pic is hi-res so it can be inspected properly. Have a great weekend, and let's celebrate Mo!

shakin' up the lineup: