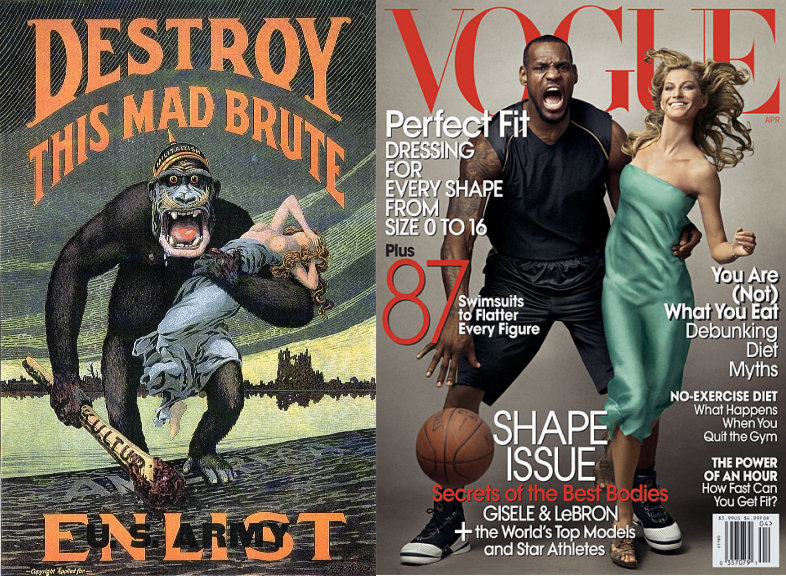 Even with a Harvard-educated black man occupying the White House, the conception of black masculinity still revolves around the primal, not the intellectual. The first skill any African-American man learns in navigating the white world is how to make white people comfortable. He must be nonthreatening. Before he can profit from the snarl, he must first soften them with a smile. These tactics predate Matt Barnes’ tweeting of the N-word; they predate the NFL, Jay Z and the Civil War.

Yet no matter the tactic, no matter how powerful or savvy a black man might be, manipulation of his image remains a shadow currency. LeBron James was the first black male to gain the cover of Vogue, in 2008. His portrayal conjured images of King Kong — it was him roaring at the camera with a white woman, Gisele Bundchen, in his arms.

These old constructions, very much alive, were returned to light by Jonathan Martin and Richie Incognito. Here was a case in which a white man used racial slurs to a Stanford-educated teammate who comes from a two-parent, Harvard-educated home. And more than anything else, the root issue was the eternal difficulty this country has in allowing black men to live in full dimension. Martin didn’t look the part. He didn’t conform to the accepted code of black masculinity, exposing the fault line that has always run underneath the American soil, transformative president or not.

On the Dolphins, Martin wasn’t seen as a real man. Uncomfortable with the strip clubs, he wasn’t trusted as one of the boys. And because he represented the images of scholarship and manners, of dignity and higher education — reputable qualities generally associated with white mainstream America — he was inauthentic in the eyes of black players, but no more authentic in the eyes of whites. His teammates preyed on Martin’s economic class and demeanor, viewing each as weakness, his education as a mimicry of whiteness. (It’s telling that John Elway and Andrew Luck, also Stanford grads, have never been accused of being soft.)

[Image Via: The Starting Five]

Brought this to mind:

I just heard that Nelson Mandela passed away. Salute.

Mandela is finally free. New icons are hard to come by. I don't think he will ever be forgotten.

Sorry that this article was interrupted by the sad death of Nelson Mandela. Not sure we have done it justice.

That Questlove essay is just beautiful.

Interesting take on the Vogue cover. Looking at it does make me think that whoever designed the cover had knowledge of the "brute" enlistment ad. Although the ad does fit the narrative of bigotry (there was plenty of that going around, especially after "Birth Of A Nation") the ad is portraying Germans (moustache and all) as brutes, not African-Americans or even Africans. It is a World War 1 recruitment poster. More about it here http://www.net-recruit.co.uk/blog/careers/army-recruitment-propaganda-through-the-ages/