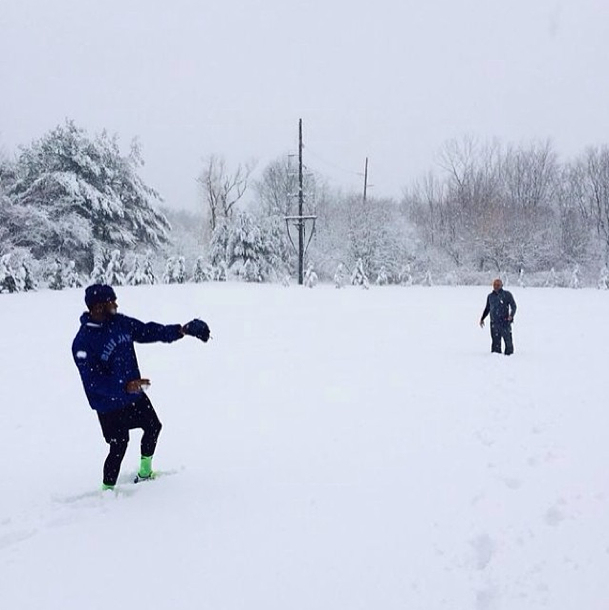 Found this picture taken of Jose Reyes yesterday over at Hardball Talk.

Spring training is just a few weeks away.

Mr. Jeter is already at work.

We are officially in the throes of sports purgatory now that the Super Bowl is over and the Knicks blow goats (at least I'M in those throes). This is the time of year where I end up watching a whole bunch of college basketball and movies I haven't seen yet.

But hey, 3 weeks till the first Spring Training broadcast on YES!!

Love the picture. Takes me back to my young days in White Plains. Every time we had a day off from school because of snow, we played "Sno-Ball" (using a softball), and diving for grounders was always fun.

Another fun game: tackle basketball on a snow-covered court. No dribbling, you could tackle the ball carrier.

[1] And I can't stand basketball (too much scoring, decreasing the value of each play.)

But at least there's the Olympics this year.

Well, this year at least we have the Winter Olympics! I'm looking forward to it.
Curling!

It's NBA time for me. And more than that: time for catching up on movies.

[5] And recorded episodes of Treme

(5) same here, I might try to check out Dallas Buyer's Club this weekend. And Moving Image has Lawrence of Arabia on Sunday!

7) Dude: If you've never seen it on the big screen you are in for a treat.

[8] Yes, it's a spectacle on the big screen. But as a movie, I think it's highly over-rated (in my not-so-humble opinion).

10) those are basically my exact feelings regarding 2001

I find 2001 boring. I understand that about Lawrence. I still love watching it. And no matter how big your HD TV is, it is no replacement for a movie screen. Go.

Alex - 2001 is sorta like baseball. No rush, no time limits. The little stuff matters. The theme is the same (as George Carlin might say, "getting home"). It's also like baseball in a structural way: the set up (call it innings 1-3), the trip to Jupiter (innings 4-8) and the save in the 9th (with a promise of another game to come).

[15] A good pal of mine thinks LoA is the greatest of all time, and goes to see it every year on the big screen. UI laugh at him about it. Yea, O'Toole was pretty cool, the sheer size of the movie was great, but the acting? Not so much. And of course, it had little to do with the real history of events.

A good pal of mine thinks LoA is the greatest of all time, and goes to see it every year on the big screen. As he and every other actual film lover should, Lawrence in 70mm at the Cineramadome is like the Hajj ...

And the script? Like Ruth calling his shot against Root. That kind of shot.

Truthiness? Shrug. Yeah, it's not 7 Pillars of Wisdom. It is as the Lawrence Society might say, "Smith of the Desert". And? It's not a documentary. As history, I think it gets close enough to the "truth" of things; as "cinema"? The sheer mastery of writing, acting, composition, editing, cinematography, direction, etc, stands it above any other I've ever seen.