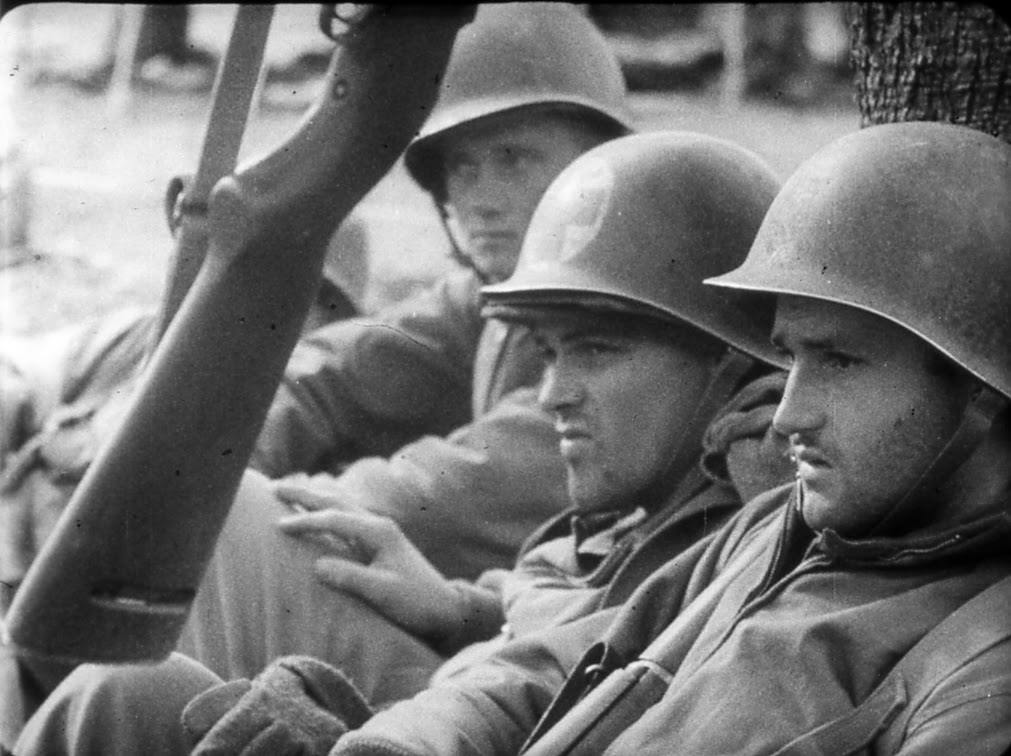 In the latest issue of the New Yorker, David Denby reviews Mark Harris’ new book, Five Came Back: A Story of Hollywood and the Second World War:

In early 1944, John Huston made a film about an infantry unit’s tortuous struggle to clear the Germans out of San Pietro, a small town northwest of Naples, and the surrounding countryside. When “The Battle of San Pietro” came out, in 1945, it was hailed for the power and the grit of its combat scenes and for its portrait of civilian misery, and Huston was praised for his courage. The film has been honored in those terms many times since. Yet, as Harris reports, the scenes in “The Battle of San Pietro” were largely re-created after the town had been taken from the Germans. Huston had access to official accounts of the struggle, culled from interviews with soldiers who had fought in it, and he used maps and a pointer to keep the American tactics and the chronology straight. But the bloody progress of the G.I.s across fields and along a stony ridge outside the town was staged; Huston’s actors were soldiers whom the Army assigned to the project. The men certainly look the part, their faces fatigued and worried. Huston asked them to stare into the camera now and then, as people do in newsreel footage. At times, the camera jerks wildly, as Ford’s camera had in Midway. Huston turned the signatures of authenticity into artifact.

“San Pietro” ends with text that demurely admits that some of the footage was taken before or after the actual battle—which hardly amounts to full disclosure. Harris has seen the mass of uncut footage, and he’s indignant about the imposture. Yet the issue remains complicated. Certainly, it’s dishonest to claim that something is authentic when it’s not. But all movies are illusions of one sort or another, and perhaps it’s best to say that some illusions are truer than others. In the case of war, what kind of representation brings you the most vivid and the most accurate sense of a terrible event? Steven Spielberg, staging the D Day landing in “Saving Private Ryan,” delivered a greater sense of the deadly turmoil on Omaha Beach than either John Ford or George Stevens, both of whom were in Normandy during the landing, with multiple crews and hundreds of cameras. Many of the cameras were unmanned or didn’t work; the footage recorded that day is largely out of focus or grisly in a fragmentary way.

The War Department wanted morale-building movies for the home front, and, under pressure, both Ford and Wyler softened their groundbreaking work. Ford added hokily reassuring dialogue (spoken by Jane Darwell and Henry Fonda) to “Midway”; Wyler included scenes of ceremonial visits to the Memphis Belle by top generals and by the King and Queen of England. In “The Battle of San Pietro,” Huston offers no such reassurance. As the soldiers advance through smoke and mist, many of them falling to machine-gun fire, the tone of the narration, which Huston himself speaks, is grim. The beautiful old town, when the Americans get there, is nothing but rubble. The survivors look exhausted—not jubilant but merely relieved that their part of the war is over. Huston not only presents the physical hardships of battle; he creates the war as a cultural and moral catastrophe. The sense of desolation is broken only at the end of the movie, by a scene of children playing in the street, their innocent faces making a minimal claim against despair. Even if the images are mostly contrived, “San Pietro” is aesthetically of a piece—and magnificent.

Most all of those Civil War photographs? Staged. The bodies were placed where they were. Doesn't make them any less dead.

I just picked this book up - really looking forward to it. His "Pictures At A Revolution" was excellent.