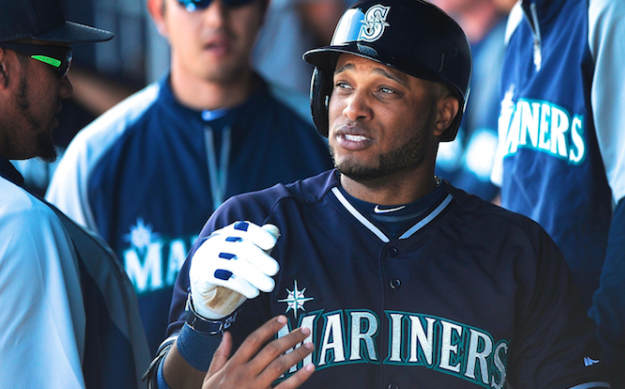 His number one protégé is Justin Smoak — a young player who gives you the sense that he has played forever, but just short of his potential. Critics wonder when he will put it all together. He has power, he switch-hits, he can field, he has a good sense of the strike zone. Cano won him over from the start, and he made it clear to Smoak that he would be demanding more from him.

Cano broke out the Yankees hitting coach Kevin Long’s book on pregame ritual. He shares the same drills with his new teammates, making everyone accountable and providing access to tips that helped him year in and year out. And he is continuing his reputation of playing every single day, just as he did in New York, acknowledging that “ironmen” can teach lessons by showing it, not just talking it.

As Smoak described it, “I always knew what I needed to do, but with Cano here, I see it getting done.” Cano has actualized possibility. He personifies the hopes and goals of a team that has been counted out, and he’s made it real for players who have had the talent, but just needed to make it tangible.

In many ways, that may be another way to honor a legacy: to pass it on and prove that it can work in another environment. It is a way to celebrate it on a larger scale, to show that the lessons are applicable in other clubhouses, in new cultures. I would imagine Kevin Long or any hitting coach would be happy to know his drills help all players because they embody a universal truth. The ultimate compliment to a teacher.

I really miss Robby. I don't blame the Yanks for not going for the money but it sure was fun watching him play.

Now if he could just teach his fellow teamates to hustle to first. Joking!

I miss Cano and his thousand watt smile, and I wish him well. Just not when he faces the Yanks.

I loved Cano and defended him to the hilt while he was here, but I don't know...I really don't miss him THAT much in the early going. I think a lot of that is rooted in my belief that the Yankees are ultimately a better team than Seattle.

Not saying the Yanks are better off without him, mind you, just that I think I'm more likely to watch good baseball all year than a Mariners fan.

I miss him but not too much either. And I am happy that he's got this role in Seattle that he wouldn't necessarily have in New York.

I miss his defense the most. He wasn't always going to hit rockets all over the field. But his sidearm laser throws to first were unparalleled and always made me happy.

The thing is, Brian Roberts is terrible.
I mean, I guess he can field ground balls, when he isn't in an MRI tube. But his OPS is under .500. He's much, much worse than a scrub replacement player.

I'm sure he's a great guy, and he probably hustles to first when he grounds out.

I REALLY F#ckin' miss Robbie! Still super pissed at the Yankees for not signing him. They have the money and Cano is a special player, he's going to the HOF one day. I can't believe the Stein Bros can watch the infield they put out there and still try to defend not signing Cano to something near the Seattle deal.

[6] Brian Roberts, Kelly Johnson, Dean Anna...just a awkwardly constructed team. LOVE the OF but the IF is a disaster..are moves coming??

But Dean costs nothing, and Kelly is cheap and his OPS is .939. And anyway they were added as bench players, only playing daily because Jetes and Teix are hurting. Brian Roberts is who we have instead of Cano, and he sucks big time.

And by the way, do we really need eight bullpen pitchers including three lefty specialists? Or could we have a guy who could have played first base and maybe hit when Cervelli pops a hammy? Good lord. Maybe bring JR and Austin up. I bet you one of them could pitch an inning if necessary.
Oh, but they don't throw left handed, so forget it.

Figures, my follow-up is awaiting moderation. Absolutely no idea what the trigger phrase was.

I'm in the mood to experiment. First sentence:

And by the way, do we really need eight bullpen pitchers including three lefty specialists?

Aha. I know what sentence hung my comment in moderation. I'm going to guess the phrase was not "And by the way". Let's see.

Good, how about: "do we really need eight [dangerous phrase] including three lefty specialists?"

Huh. It's the phrase "lefty specialists"???

No. Is it the word "specialists"?

Meanwhile in Texas, catcher catches ball cleanly from third baseman to force the runner at home, steps out to avoid runner and attempts to transfer ball to hand to double up the guy at first but doesn't get ball cleanly and bobbles it. Umps ruled guy out at home but replay reverses call. Runner safe at home Fucking Bullshit. Ron Washington runs out to argue and is tossed. Oi!

Because of the moderation my numbers are screwed up. But (a) I was a fan of the idea of expanded replay, but in practice it's a fiasco. And (b), no kidding? I wonder if there's a lot of doctor spam or something -- maybe for some reason a high proportion of comments using that word are spam.

RI, sorry about the Wordpress hold up. Didn't see it until now.

Yeah, Brian Roberts is appealing as a guy but he's no longer really very good as a player. I know the Yanks say they've maxed-out on spending, but that's just for now. They'll make moves--signing or trades--before the end of the summer.

[7] I still think it was the years that bothered them the most. Robbie wanted ten, Yanks would only do seven. Maybe if they'd offered mutual options after the seventh year, but Seattle guaranteed it and hey, tie goes to the runner. I'll miss his second baseness, but not the ridiculous expectations of him. When the business of baseball gets into the news cycle, it makes me like the game even less.

[16] Managers and coaches will always find a way to game the system to their advantage. Because baseball relies more on strategy than reflex far more than most other major sports, the bullshit stalling that the managers do while the coaches review the play first makes the whole thing a mockery of its intentions. I blame the heads who instituted it for that though; there just seems to be a blatant arrogant obtusity and reluctance towards installing anything new or tweaking the rules to suit the game's evolution. And never mind what the umpires really think about instant replay; it's basically a direct attack on their competency. You think some of them are not the least bit miffed about it?

[9-15] Stangely hypnotic to watch RIYank ponder the mysteries of moderation.

Losing Robbie definitely hurts worse in light of Brian Roberts' performance in the early goings here. I'm still hoping he bounces back towards, at least, a respectable season.

Yanks said no way on Stephen Drew. Bluff? If not, what other moves are out there?

FYI, the word "specialists" gets dumped into the moderation queue because it contains the word "cialis".

Aha!
Thanks, Ken, I feel like I should have figured that out. Good puzzle.