Cut to the Chase, Part II 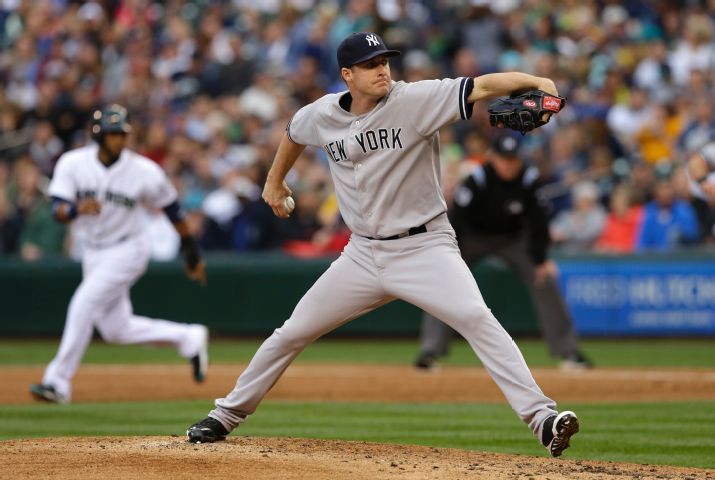 The last time I was in Seattle — actually, the only time I was in Seattle — my family and I ran past Safeco Field in a desperate (and fruitless) attempt to catch a train for Portland. It’s a beautiful ballpark, even when viewed through a glaze of sweat while carrying a five-year-old. But we really didn’t have time to stop and appreciate the nuances — the warehouse look on the outside, the retractable roof atop the structure. Considering the business-like approach the Yankees took during their three-game sweep of the Mariners, I’m not sure they were much interested in any of that either.

There were three stories in last night’s game, the first being Derek Jeter. He took the first pitch he saw in the first inning and flipped it out into short right field, just like he’s done about a thousand times, and then four pitches later he was trotting around the bases behind Jacoby Ellsbury’s fourth home run. Just when I was starting to wonder about Ellsbury, he’s rattled off a sixteen-game hitting streak, bumping his average from .258 to .290. How good has he been? This month he’s hitting .386 with an OPS of 1.006. The only bad news is that he left the game late with tightness in his hip; there’s not much to worry about, but you might want to keep your fingers crossed anyway.

But the biggest story of the night has to be Chase Whitley. Young Whitley had been good in each of his first five starts, working to a 2.42 ERA and allowing the Yankees to win four of those five games, but he arrived on Thursday night. The 2014 Seattle Mariners will never be compared to the ’27 Yankees, but they’re still a major league ball club, and Whitely navigated their lineup with ease.

This was my first prolonged look at him, and I was impressed immediately. He cruised through the first, but when he left a pitch out over the plate to Logan Morrison in the bottom of the second, the first baseman rifled the ball into the right field seats and split the Yankee lead in half at 2-1. Even at the time, it seemed like a blip; Whitley seemed bothered, but not fazed.

The Yanks put two more runs on the board in the top of the third. Jeter singled again to the lead off the inning (two pitches, two base hits), and Ellsbury walked to bring up Alfonso Soriano with one out. Soriano has been mired in such a slump that I almost felt like Girardi should have conceded his at bat like a six-inch putt in match play, just to keep the game moving. But Sori proved me wrong, rocketing a laser into the gap in left center, easily scoring both runners to boost the lead to 4-1.

For a moment in the bottom of the third it looked as if Whitley might choke on all that prosperity. John Ryan Murphy threw a pickup attempt down the right field line, allowing Brad Miller to race all the way around to third base, and two pitches later Whitley plunked our old friend Robinson Canó to put runners on first and third with two outs. But putting Canó on, regardless of the method, was probably a good thing. Kyle Seager followed, and Whitley quickly dispatched with his fourth strikeout of the night.

Our man Captain Jeter singled in two more runs in the top of the fourth to open the lead to a comfortable 6-1, and then all eyes focused on Mr. Whitley. He faltered a bit in the fifth, yielding a double to Miller and an RBI single to James Jones, but he was rescued when Ellsbury made a spectacular leaping, possibly-home-run-robbing catch at the wall against Canó to end the inning.

You won’t see too many catches like that — unless you happened to watch the rest of the game. Brett Gardner moved over center field in the seventh inning after Ellsbury’s hip flared up, and he made an almost identical play. Mike Zunino blasted a ball over Gardner’s head with one out in the inning, and Gardner raced back over his right shoulder, following the same path Ellsbury had two innings earlier. He leapt at the wall at the last second, and for a moment only he knew where the ball was. Bob Lorenz was on the mike, and he initially called it as a homer for Zunino before we all saw Gardner — who had paused for a moment of drama, standing on the warning track with both arms at his side — casually flip the ball into the infield. 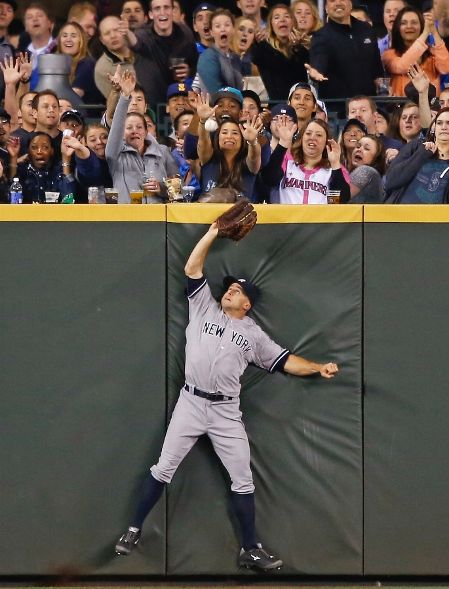 Whitley, meanwhile, was still cruising. After that Jones single in the fifth, he retired the next nine hitters. With two outs in the eighth inning, having thrown only 82 pitches, he seemed poised to go for the complete game. That pitch count, after all, wasn’t a concern. In his previous three starts he had thrown 91, 83, and 87 pitches, but with Canó headed to the plate, Girardi came out and pulled him. Considering the four-run lead at the time, Girardi’s decision was more about player development than game management, and I think he made the wrong choice. He had an opportunity to push his young starter just a bit in a relatively safe situation. The experience of facing one of the league’s best hitters in the eighth inning would’ve been an invaluable learning moment for Whitley; instead, he watched from the bench as Matt Thornton came in and walked Canó.

For a moment it looked like Girardi’s decision would completely blow up as Seager launched a ball to deep right. Ichiro had been inserted into right field when the outfield had been reshuffled the inning before, and now he sprinted back, chasing Seager’s drive over his right shoulder just as Ellsbury and Garnder had earlier. Ichiro leapt at the wall, crashed in a heap as Lorenz refused to make a call one way or the other, and emerged with the ball and the final out of the inning.

If there’s been one frustration I’ve had with the Yankees this season, it’s that Girardi has refused to accept the things he cannot change. This team is not going to score a lot of runs. With that in mind, he should take steps to prevent as many runs as possible. Conventional wisdom holds that an outfield of Gardner, Ellsbury, and Ichiro simply won’t provide enough offense. Corner outfielders have to combine for thirty to fifty home runs, right? But that trio would be far and away the best defensive outfield in the game and probably the best in Yankees history. Give in to the DH platoon of Soriano and Carlos Beltrán and be done with it.

But back to the game. Jeter grounded out in the ninth, his bid for a fourth hit coming up just a fraction short, but has he turned and jogged back to the dugout after what was certainly his last at bat in Seattle, the city that saw his first major league hit back in 1995, the home crowd gave him one of the warmest ovations he’s received on this victory tour. The cheers swelled with each step he took, and Jeter acknowledged the crowd with a quick wave of his hand when he reached the steps. It was a nice moment.

Shawn Kelley looked a bit rusty in the ninth and turned a four-run lead into a save situation, but David Robertson came in and quickly restored order, striking out Zunino and Miller to send everyone home. Yankees 6, Mariners 3.

I hate to be a wet blanket, but Whitley's performance was only pretty good, although the results were excellent. The two blasts to the top of the wall were just inches (or whatever the distance between Brettcoby and sub-stellar fielding is) away from producing a disappointing start. I mean, I'm grateful for what he's given us, but you have to be realistic.

Partly for that reason, I didn't mind Girardi's decision to pull him. And in the post-game presser, Chase said it was the right move, too.

I know we won't see Mariners again this year, but thought it worth mentioning that I don't agree with all the "Mariner bashing" on this blog. That's all based on history. I would remind you that as of today, Yanks are 34-31 and M's are 34-32. And Cano definitely makes them a better team.

Yeah, good point. And they've scored more runs that we have, even though they play in a run-suppressing park.