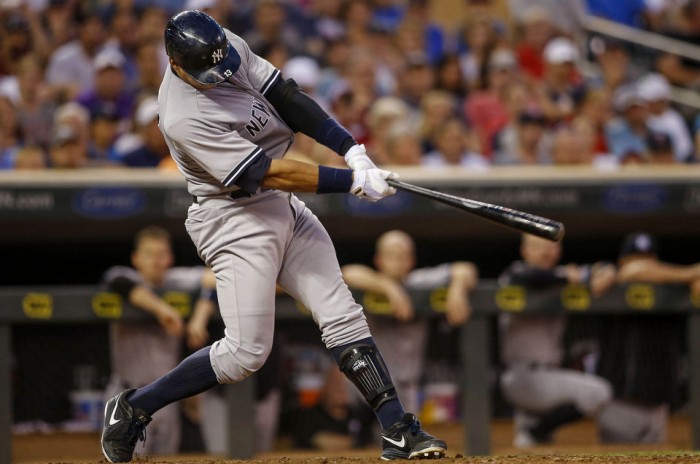 You must forgive me for taking so long to get to last night’s happy recap. I think it’s just part of the deal when you’re in your 13th year of blogging. Some days the writing falls through the cracks. There are other commitments–other work, a wife, exercise, cooking–that get in the way. And that’s cool because I know you guys saw that game last night. Or if you missed it, I know you checked it out later, looking at the box score, videos, game recaps.

We all know it was one of those nights you get a handful of times each year–one to savor, one to remember. And it wasn’t just that Alex Rodriguez hit three home runs to keep his team in the game, he hit three absolute bombs. He crushed those balls, each well over 400 feet.

Course a natural reaction is to be suspicious. That’s the price all modern players have to pay, but especially a two-time loser like Rodriguez. And that’s just always going to be part of it for some people with him. I get that. But I’ve always enjoyed rooting for him so I feel as if this has been his most joyous season as a Yankee. Maybe he was really a good guy when he was really young with the Mariners too. But now, at the end (he’ll turn 40 tomorrow) he’s doing an Edgar Martinez impression and it’s a reminder that he is one of the great players. Total cheat, screwed up dude, but also great at baseball.

He’s got the day off today and so does the other hero, back-up catcher J.R. Murphy, who had the game winner. If Rodriguez’s home runs were no doubters, Murph’s looked like a long fly ball at first, good to get a run in from third, but then it just kept going and suddenly it had cleared that very high wall out there. Hilarious back-up catcher home run. He was amped like Tom Cruise in Taps when he got back to the dugout, too. That was pretty funny.

Now, let’s hope Sweet Nathan Eovaldi comes through with a big performance today. He’s got something to prove. Would’t be surprised if he tossed a dud, but I’ll be here rooting for him.

Nathan looks sharp here in the first. That splitter to Hunter was unfair.

My favorite part of Murohy's homer was his trot around the bases. The kid simply could not keep his eyes off the dugout and couldn't wait to get there to celebrate. Clearly, the biggest home run of his life. An awesome moment.

Another thing, though. When you've got a guy, a DH no less, who hits three no doubt homers on Saturday night, he has to be in the lineup on Sunday. There's no excuse for that at all. Unless he's injured, you need to rip up your rest schedule and keep him in the lineup.

Maybe Jacoby thinks his arm is maybe stronger than it is.

3) Loved Murphy's quote in the Times:

“There’s no greater feeling than being in the dugout and seeing your teammates excited about something you just did,” said Murphy, who had just been hoping to hit a fly ball deep enough to score Carlos Beltran from third.

Also, I respectively disagree about Alex. They've got a series coming up in Texas where apparently it's going to be like 100 every day and giving him a day off on a high note makes sense. I've done that with writing--sometimes I'll stop when I'm going good because then when I pick up I'm already on a roll. If Joe G was planning on giving him a breather, I can see why he'd choose today. Also, how he thinks Alex would match up against today's starter might have also played into his decision, too.

I get where you are coming from and I'm not saying you are wrong but I could see it the other way, too.

Meanwhile, did you see this thing with Reggie?

Man, bases loaded, nobody out for Beltran. Swings at three balls out of the zone.

Up to Garrett Jones.

Jones leaves the first pitch alone and takes it outside and low for a ball. Next pitch doesn't sink but it's a fastball outside, Jones swings, late, and fouls it off. 1-1. Fastball stroked to right for an RBI single.

Fastball, over the plate but with movement, Headley swings late and fouls it back, 1-1.

Meatball stroked to right, this one more down the line, 2 runs score!

First and third only 1 out. As the Twins make a pitching change let's hope they get that runner from third home for Eovaldi.

Didi lays down a bunt, a bad one but effective in that it gets a run home.

So last night the wife convinces me to watch a movie with the yanks down 5 zip. Today we're strolling around the lake and turn on the radio when we get in the car. Yanks score a huge bunch. I'm thinking I need to stop watching games...... nah.

Excellent job of composure by Eovaldi in the 6th. Really like how he's responding here, a really very good performance. He should go at least 8.

Finally got my MLB At Bat account straightened out last night, just in time for Alex's second homer.

The radio delay is weird. And apparently the TV broadcast between NY & Minnesota is blacked out at Lake Gaston, between VA & NC.

Pedro's being inducted on MLB. Of course they won't show him throwing Popeye to the ground. #Bitter

Eovaldi has passed all tests today. Really nice performance. Good for him!

He youse, tuning in early in the morning here in Canberra. So this is a long distance call. Too bad I could get up a little earlier I guess, but I'll see the finish anyway.

Hold it together big fella. Get one more ground ball, a double play and you'll be okay, doesn't matter if you give up a run.

Atta baby! Just what the doctor ordered. Nifty play by Didi. That was smoked.

So cool if Nate could get his first CG.

Christmas and Betances has got to come in to finish it. Amazing how all a sudden getting an out is a tough thing.

Betances vs Nunez, first and second, nobody out.

99 mph fast ball running in. Nunez dives out of the way. Ball One.

Fastball over the plate, Nunez skies it to center for the first out. There, see, an out isn't so hard to get.

Ha! The ol Zippo Bang, double play to end it.

Great job by the Yanks this weekend taking 2 of 3 the hard way.

And the Jays lose late.