The Brief But Productive Yankee Career of Aroldis Chapman 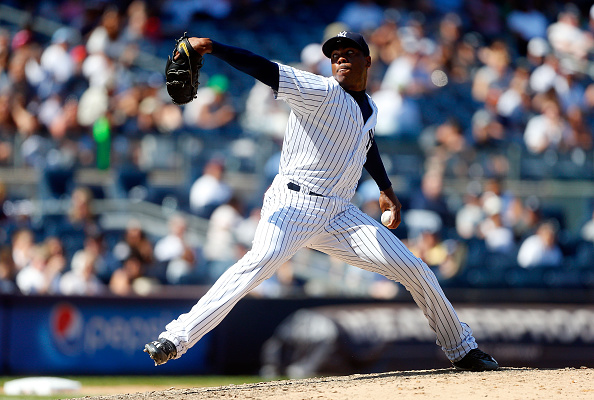 And so ends the brief but productive Yankee career of one Aroldis Chapman. The Yanks picked him up for a song last winter when Chapman’s name was mud. He served his time on a domestic abuse rap and once he got on the field, Chapman was as dramatic as promised—the left-handed version of fabled Yankee fireman, Goose Gossage, number 54 and throwing over one hundred. Never mind that some of us had a hard time rooting for him because of the domestic abuse stuff—that’s Chicago’s problem now as the Yanks send Chappy to the Cubs and their Whirled Serious dreams.

I’d say that worked out splendidly for Cashman and the Yanks—not to mention, Chapman—don’t you think? In fact, can you think of deal where the Yanks got more value out of less? Chapman pitched just a tick over 31 innings—for Adam Warren alone, 31 innings would be a steal. Then you throw some young dudes in the mix?

I’m pleased I got to see Chapman live once—and am not sorry to say goodbye, not for this haul.