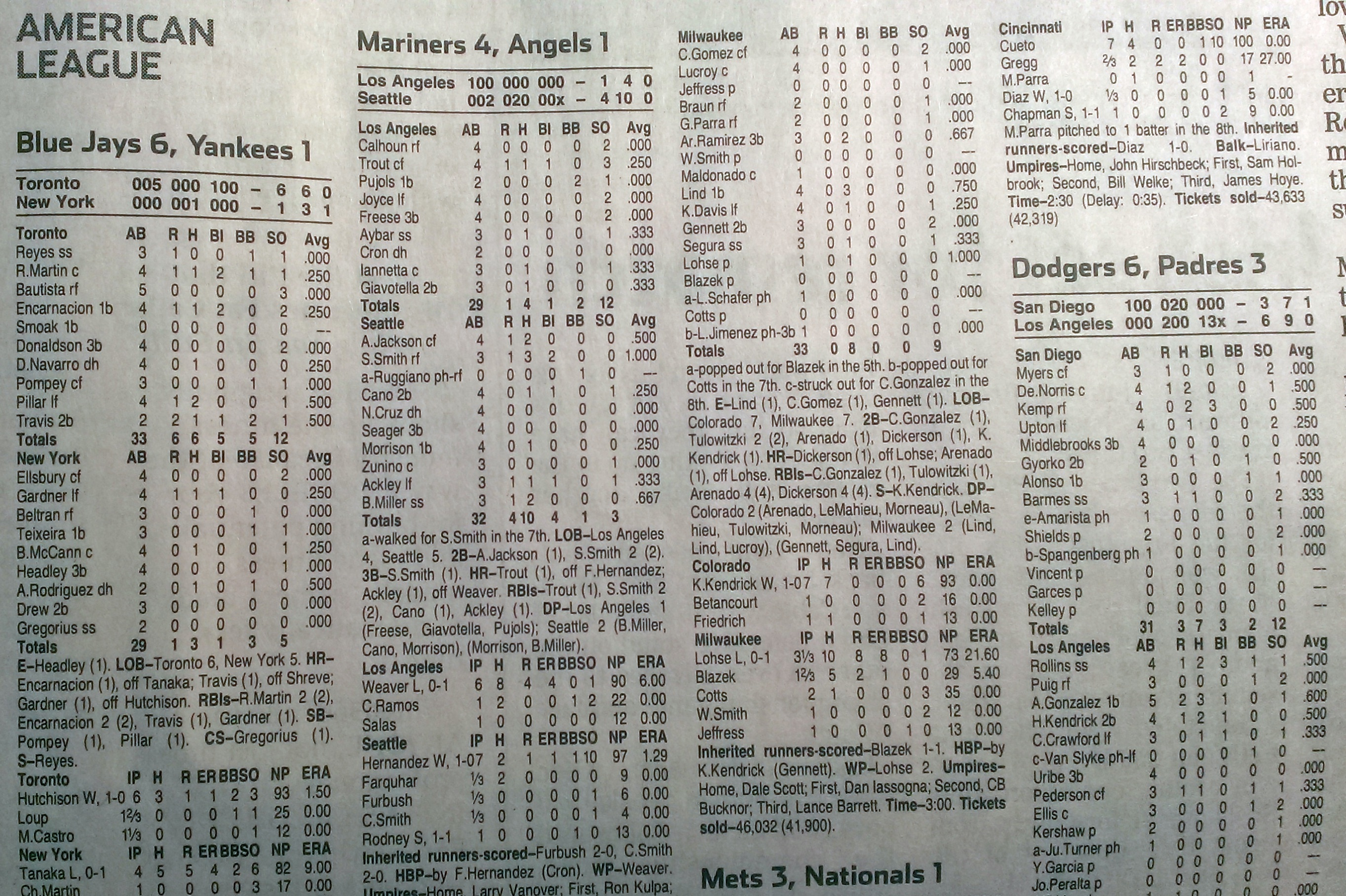 [Author’s note: The following was originally written in April of 2019.]

I read a newspaper today. I found myself staying in a hotel in Washington, DC, along with eighty of my middle school students on an East Coast trip that started in Boston, continued in New York, and finished in the nation’s capitol. When I walked downstairs and turned towards the breakfast buffet, there they were, quaintly laid out on a counter like relics in the museums we’d been visiting all week.

I grabbed a copy of the Washington Post, not necessarily for the news, but for the same reason you might pick up your grandmother’s rotary phone and give it a quick spin. There should be a word that means “amused nostalgia.”

But then something interesting happened. It turned out the Sports section was sitting just where I’d left it ten years ago, three sections from the front, and everything else was just as I remembered. (And by the way, if we’re going to add words to the lexicon, we should also replace outdated similes; from here on out, instead of “just like riding a bike,” let’s agree on a different phrase: “just like reading a newspaper.”)

I’m certain that none of my fourteen-year-old traveling companions could navigate a newspaper, nor would they understand its idiosyncrasies. Headlines make perfect sense in the unlimited space of the internet, where a complete sentence or even two can sprawl luxuriously across the top of an article, but “Nats get boost from Robles in No. 2 spot” drew my eye immediately and reminded me of headlines from a past when static dimensions of pages and columns once gave us headlines like “Spike Inks Pact” or John Updike’s famously poetic “Hub Fans Bid Kid Adieu.” It was an art in and of itself.

So after I read the first eight paragraphs about Victor Robles and his productive night from the second spot in the lineup, a kind note at the bottom of the column pointed towards the rest of the article: See NATIONALS on D5. As I dutifully turned the pages, I passed familiar features common to most Sports sections: a digest with highlights from around the sports world, a table of television and radio listings, and a notes column about the hometown Washington Nationals.

But before I could read more about Robles, I was transfixed by a full page of baseball boxscores. Once upon a time this was the highlight of my day. I’d find the Yankee game and carefully scan each line of the agate type for clues about how the game had gone — who had gotten the hits, stolen the bases, and scored the runs. It was a daily ritual during baseball season that began when I was eight or nine and didn’t end until the internet stole it away.

In this current era I’ve become a much more focused fan. I know far more about Judge and Stanton than I ever did about Mattingly and Winfield, but as the internet and satellite television have narrowed my focus, it’s as if the rest of baseball has fallen away.

Again, this morning’s Sports section reminded me of all this. A dozen box scores stood stacked across six columns, each telling a story of a different game, and the league leaders were posted on either side. Perhaps appropriately, there were none of the modern metrics like WAR or even OPS, but instead the statistics from my childhood: batting average, home runs, and RBIs for the hitters; ERA, saves, and strikeouts for the pitchers. Some of the names made sense — Christian Yelich and Khris Davis, Max Scherzer and Justin Verlander — but who could’ve known there’s an Alexander in Chicago hitting over .400 or a Yates in San Diego leading the league in saves? None of that would’ve gotten past me as a child, but today it’s news. Tomorrow it’ll be trivia.

I can’t imagine that I’ll ever subscribe to a daily newspaper again, and that’s a shame. For all I’ve gained, something has been lost. Sure, it’s nice to have instant access to the information I want (the Yankee score wasn’t even in the paper: NY Yankees at LA Angels, late), but it was nice this morning to get all the information I didn’t know I needed.

When I put down the paper, I knew more than when I had picked it up, and I was also left with something else my iPhone will never give me — ink-stained fingertips.

Great article, Hank. An ode to the newspaper.
Box scores and top 10 lists as a kid? Hell yes! (Newark Star-Ledger, which I later delivered). I'd spread the sports section on the living room rug and have at it.

I subscribe to and read 2 newspapers everyday with my morning coffee. The Japan Times and the international edition of the NY Times. I don't know what I'd do without them. It's the cornerstone of my day. Unfortunately, no box scores anymore.

That was my method also -- sports page open on the floor, the better for absorbing the entire thing. I was thinking about that as I wrote the piece, but it didn't make it in. I also had a paper route, delivering the Orange County Register when I was in the seventh, eighth, and ninth grades. Best job a kid could ever have.

Yes. The paper route. (BTW, I have read the OCR. Lots of family in the area.) But man, those Sunday papers for the Star-Ledger were a bitch and a half.

The paper route has been my go-to rant on my daughter who could barely ever get up for high school. "I had all my papers delivered before 7AM and THEN I left for school!"

She still turned out AOK, though, and starts uni next week. And now I tell her, well once you get into your sophomore year you can fix your schedule so you don't have any early morning classes, which is what I did.

Nice article Hank. I remember learning to read (I lived in Queens, and we got the Mirror in the AM) by reading about the Yanks. (Thanks Mom). My kindergarten teachers were amazed that I could read, and a couple of years later (maybe I was 7) my Dad showed me how to use a slide rule to figure ourt batting average and ERA.

Hey, Gary. Like you, my early reading was completely driven by baseball and the Yankees. Like your parents, my parents leveraged my baseball interest to encourage learning in other areas. When I was in the eighth grade (1982) we got an early Apple computer, and Apple IIe. My mom had gone back to school to earn a second degree in computer science, so she wanted me to learn how to program. With her help, I wrote a program to keep baseball statistics.

Remember, this was long before statistics were readily available. Because I didn't get a New York paper, the only time I could see overall statistics was on Sundays when the sports section would print the full list of qualified batters and pitchers. I looked forward to going down that list each Sunday, but the wait was awful. I needed stats on a daily basis.

So my program allowed me to track the stats. Every day I would use the boxscore to dutifully enter each player's statistics one at a time so that I could then view all the stats I wanted, not just batting average, home runs, and RBIs, but doubles, triples, stolen bases, and hit by pitch. My program calculated batting and slugging. WHIP didn't exist yet, but I did figure K/9 for my pitchers along with the usual stuff.

It was the nerdiest thing ever, but in era without the internet or even spreadsheets, I'm pretty sure I had more Yankee data than almost anyone who wasn't working for the team or Major League Baseball. (One of the best things was the ability to track the Mattingly/Winfield batting race in 1984.)

I kept the program running through middle school and high school. Somewhere in a box in the garage there are dot matrix printouts that tell the story of those teams, but they say a lot more about the boy who chose to print them out.

[3] I actually had an afternoon route. It seems odd that anyone would want to subscribe to an afternoon paper, but apparently people did. It worked out well for me, though. I delivered the route as soon as I got home from school every day, but it was morning delivery on weekends and holidays. And you're right -- the Sunday papers were... a challenge. I still remember how the week used to go. Like the New York Times crossword, it ramped up through the week. Monday would be light, 68 or 72 pages with no inserts (sales ads). Tuesday usually the same, maybe one insert. Wednesday, Thursday, Friday would get progressively bigger, always over a hundred pages, always with two or three inserts, which added to folding time and delivery time. Saturday would be a bit bigger still, but Sunday would be over 300 pages, sometimes over 400. Multiple sections to put together, inserts. This meant multiple trips, usually three or more, because the papers wouldn't all fit on your bike.

Oh, one other thing -- did you have to go collecting? For some reason the Register didn't bill the customers. They thought it was as a better idea to have thirteen-year-old kids ride around and knock on people's doors to ask for their $4.75 each month ($2.50 for Sunday only). My mom never liked that I was riding around at night with pockets full of cash, but I don't think I was ever in much danger on the mean streets of Irvine, California.

Just realized that no one under the age of forty or so will have any idea what any of this means. I have become a history book.

[6] Yes. Collecting. The bane of my existence. Really got to know the types of customers you had. Rich folks that seemed to never be home. Blue-collar folks who tipped like crazy. Bachelors sharing a house.

I always did the route on foot, holding the papers under my arm. There were too many customers too close together to make it bike worthy. Our policy was to put the newspaper inside the screen door so when they opened their door it would fall into the home. On Sundays I had to use a wagon to carry them....stacked a good 3-feet high.

[5] That's pretty amazing. Figuring all that out on your own.

I had an afternoon route as well. The Providence Journal published a morning and afternoon edition on weekdays. Collecting was my least favorite thing as well.Except for one customer who seemed like a really nice guy. He tipped well and gave me nice bonuses on Christmas.When I told my dad about this customer he asked me his name and when I told him it was Raymond Patriarca he said that Patriarca was head of the New England mob.Needless to say, I never forgot to deliver his paper.
Glad baseball is back. Go Yanks!