Not Your Father’s Rivalry 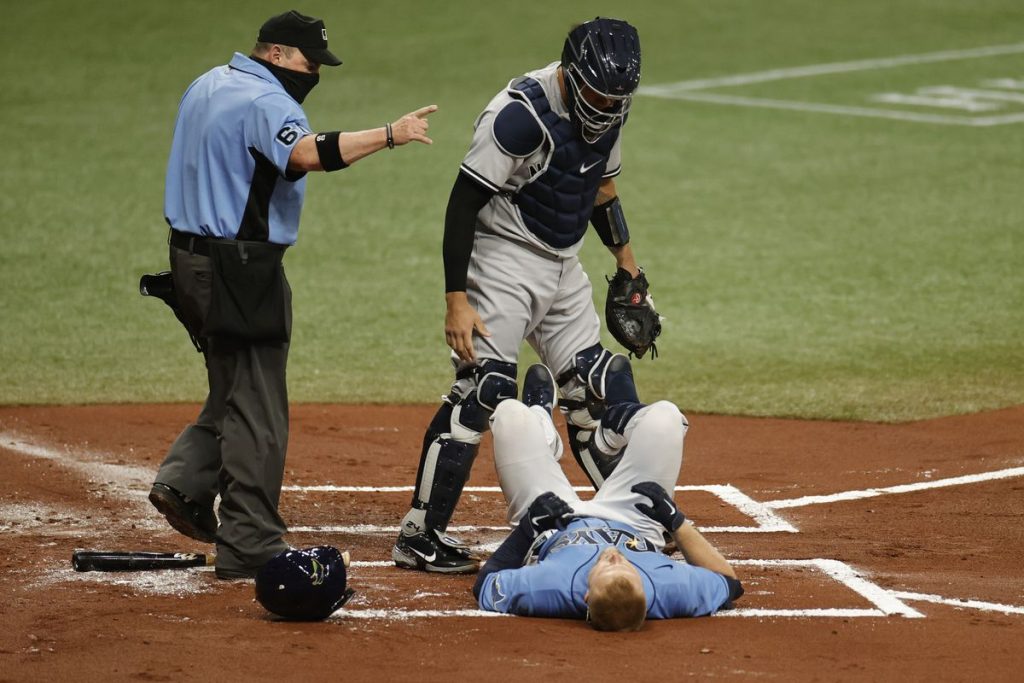 Whether in the Bronx or Fenway, regular season games carried the intensity of any World Series game played in that era, and any fan from either side of the rivalry whose memory stretches back that far can rattle of an impressive list of dramatic moments — Derek Jeter stumbling out of the stands with blood dripping from his face, Jason Varitek and Alex Rodríguez scrapping at home plate, Pedro Martínez sending Jeter and Alfonso Soriano to the hospital, Mike Mussina losing a perfect game with two strikes and two outs in the ninth inning.

When Major League Baseball switched to an unbalanced schedule in 2001, suddenly the two rivals were matching up 18 or 19 times a season, and each three- or four-game series would drain days off my life. The games would routinely push the four-hour mark, but there were moments within each game that seemed to bend time. Manny Ramírez and David Ortíz used to hit third and fourth, and while their consecutive at bats might only have lasted three of four minutes, the tension — the absolute fear — made watching their plate appearances feel like a punishment dreamed up by Dante.

The Red Sox were a great team, but they were filled with villains. I could never really hate Manny, but I had plenty of venom for other Boston players. We all did. While standing at a Stadium souvenir stand once, a guy turned to me and said, “Fuckin’ Youkilis…” He apologized for his language when he noticed I was holding my three-year-old daughter, but I shook him off. “Don’t worry about it,” I said. “She needs to know.”

All of this escalated more than a little bit when the teams met in the American League Championship Series. I’ve been lucky enough to watch the Yankees play in the World Series ten times, but nothing in their seven wins or three losses — not even 2001 — compares to what happened in the ’03 and ’04 playoffs.

Pedro Martínez reached new depths in 2003 when he plunked Karím García and then tossed 73-year-old Don Zimmer to the ground in Game 3, setting up the drama of Game 7, when he coughed up a three-run lead in the eighth. (Seventeen years later, the highlight clip still gives me goosebumps.) It might seem like blasphemy, but when Aaron Boone hit his walk-off homer three innings later, I knew that the World Series would neither compare nor matter.

In 2004, of course, the Red Sox got their revenge. Before that year’s ALCS, I thought the 2001 World Series would live on as my ultimate Yankee tragedy, but standing by as the Sox climbed out of their 0-3 hole was like watching that bloop single from Luís González four nights in a row. Like having your Promethean heart ripped out by the vultures day after day after day after day.

So here’s my point. THAT was a rivalry. And now we’ve got… the Tampa Bay Rays?

I’m not being intentionally condescending. There are a lot of things that I like about Tampa Bay. The openers, the incessant shifting, the four outfielders — I love all of those innovations, and I respect what they’ve done without any of the thermonuclear advantages of the Yankees and Red Sox and Dodgers.

But I don’t care about them. So when the Yankees bowed down to them on Friday and Saturday, there was no stomach churning bile, no grinding of teeth into dust, but there were concerns.

We’re only nine games into the season, but we already know a few things. First and foremost, Gerrit Cole is a freak of nature. I know that Roger Clemens was 20-3 and won the Cy Young in 2003, but it’s hard for me to believe that he was any better then than Cole is now. Other pitchers are also throwing well — eight different relievers still have perfect ERAs, led by Chad Green and Jonathan Loaisiga, and Michael King’s one scoreless six-inning appearance was enough to make me want to see him in the starting rotation.

We’re only 1/18 of the way through the season, but it’s still surprising that the biggest Yankee concerns are not on the mound but in the batter’s box. There have been some bright spots — D.J. LeMahieu is riding an eight-game hitting streak and Gary Sánchez is off to a refreshingly nice start, regardless of what the New York Post’s racist emeritus has to say — but there are far more question marks.

Will Aaron Hicks live up to the potential we saw in 2018? Will Gleyber Torres remind us why people think he’ll win an MVP one day? And as good as Aaron Judge has been thus far, will he play 150 games — or even 125?

There aren’t any answers here, nor even any predictions, and I can’t say that I’m bothered by all the uncertainty. Yes, the Yankees are 4-5, but they’ve got 153 more games to figure all this out. The only problem I see right now is this — the Red Sox are 6-3.

I remember when the Yankees started out 0-3, first year I subscribed to Extra Innings and figured that I blew a wad of cash. 1998 ended well, though.

It's still early and I think the Yanks will be fine. I wish Cashman had called up Garcia with the Germán demotion.

Get that run back.

Great write-up, Frank. I drove by the trip 2x a few weeks ago. I gave it the finger both times. The jays are wearing out Cole.

If the Yanks win this one they'll be 6-6 heading into an off-day on an upswing. I really don't want them to fall to 5-7.

This season is starting to have the same vibe as '85 when the Yanks started 6-10, George fired Yogi, hired Billy, and they finished 91-54 and nearly won the East. I'm not advocating firing Boone, just mentioning the feeling I have. With a team 98 OPS+ maybe it's the hitting coach; or maybe I'm just freaking out way too soon.

How do you say “do you miss me now” in Japanese?

Second homer for Judge. Note to other Yankees, please be on base when Aaron is at the plate.

I LOVE watching Jay Fucking Bruce strike out with 2 risp and 1 out. SWEET!

Whelp. Gio makes it all better.

[14] I really think it's time for a shake-up at the top. This losing business is getting old.

Glad I missed the end. Had to drive the parents to the eye doctor.

Well, I say 5-7 isnt bad given the fact the team isn't hitting and their starting staff is weak af.

Is Boone using an old Milton Bradley game spinner to pick out these lineups?

On second thought, these porcelain gods better not even think of playing Twister.

It’s Jackie Robinson Day! So why isn’t there a full slate of games? It’s not like the day snuck up on MLB, there are these things called calendars.