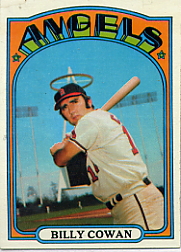 Billy Cowan was once described as the “epitome of a fringe ballplayer.” That characterization was dead solid perfect in assessing the journeyman outfielder and onetime Yankee, who bounced from the Cubs to the Mets to the Milwaukee Braves to the Phillies to the Yankees to the Angels during an eight-year career that spanned from 1963 to 1972.

Cowan was never close to being the best player on any of his teams, never an All-Star, and will certainly never make the Hall of Fame. Yet, he receives more autograph requests through the mail than most journeyman outfielders of similar vintage—if only because of his comical 1972 Topps card. Opting to have some fun with Cowan, the Topps photographer lined his head up perfectly within the confines of the old halo at Anaheim Stadium, now known as Angel Stadium of Anaheim. At the time, the ballpark still featured a large halo at the top of a tower within the perimeter of the ballpark. (I may be wrong, but I believe that the halo is now featured in the stadium’s parking lot.). One thing I’ve always wondered about the Cowan card is whether the outfielder was actually aware of what the photographer was doing. It certainly looks like the photographer intentionally set up the photo so that Cowan’s head was right in the middle of the halo, but I’m not sure that Cowan realized that. Either way, Cowan has maintained his sense of humor about it—along with his willingness to sign the card when it’s sent to him in the mail.

The 1972 card, by the way, was the last one issued for Cowan, who played in only three games—all as a pinch-hitter—before drawing his release. While the Angels contended that Cowan was no longer a useful player—after all, he was 0-for-3 as a pinch-hitter and had struck out 41 times against only seven walks in 1971—Cowan felt differently. Once labeled by The Sporting News as the “Clarence Darrow of the clubhouse,” Cowan filed a grievance against the Angels through the Players Association, claiming that the release occurred for reasons other than baseball ability.

As the Angels’ top pinch-hitter in 1971, Cowan contended that California had cut him loose because of his active role as the Angels’ player representative, which was like being branded with a scarlet letter at the time of major collective bargaining friction between the players and owners. Like Cowan, three other player representatives for the Angels had also been relocated, with infielders Jim Fregosi and Bobby Knoop sent packing in trades and catcher Bob “Buck” Rodgers demoted to the minor leagues. The Angels, like the 23 other teams in existence at the time, dared to strike at the tail-end of spring training, delaying the start of the 1972 regular season—and perhaps influencing the eventual end of Cowan’s major league career.

Thankfully, the end of that career didn’t come before the manufacture of one of the quirkiest cards in Topps’ history. If for no other reason, Billy Cowan, fringe ballplayer, will be remembered for that.

Bruce Markusen writes “Cooperstown Confidential” for MLB.com and can be reached at bmarkusen@stny.rr.com.