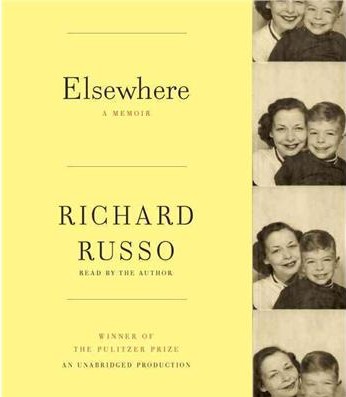 Here’s Richard Russo in the L.A. Times talking about his latest book, Elsewhere, a memoir about his relationship with his mother:

Why your first memoir now?

In a sense I would have preferred that it be never. I’m a perfectly happy novelist. I love to invent things. But in the months after my mother’s death, which was about five years ago, she was very much on my mind and also visiting my dreams as well, which made it feel to me like maybe there was unfinished business there.

I think that this book is in a way connected to my novels, especially the last couple, because “Empire Falls” and “Bridge of Sighs” are both about people who are pushing 60 pretty hard and wondering, how in the world did I come to be here? [In “Empire Falls,] Miles Roby has this profound sense of his mother’s dream for him, and he imagines this other life where he is a learned man if only he had finished college the way she wanted him to and become some sort of teacher or professor, that he would have fulfilled her dream. In “Bridge of Sighs,” Lucy Lynch, who never leaves his hometown, wonders, how is it that life turned out this way? What was it in my genetic makeup, what were the choices that I made?

And in the months after my mother’s death, I found myself puzzling over these questions of destiny, because we shared so many similarities, both of nature and nurture. We’re both obsessive genetically, I think.

…Did you feel it was your responsibility to make your mother happy, which she never really was?

Yes, I felt the weight of that. I felt that if she wasn’t both happy and healthy — and healthy every bit as happy, because at a very early age, I felt that her health was in some way my responsibility… We’re not talking about front-of-the-brain stuff, we’re talking about back of the brain. I mean I’m not stupid. I know that nobody can make somebody else happy or healthy, but that’s in the front of the brain. That’s what you know intellectually, which has really very little to do with that other part of the brain that you don’t have control of.

I wondered whether there wasn’t something about the intensity of this relationship that was peculiar to the fact that it was between a mother and son, especially since the mother is a single parent and the son a single child.

When you’re an only child and you have no one to compare notes with, everything seems normal. And for me, part of the experience of writing this book was not to tell people what I knew, but rather to tell them what I didn’t know, what it was like growing up as a child with someone you sensed was in some way possessed. 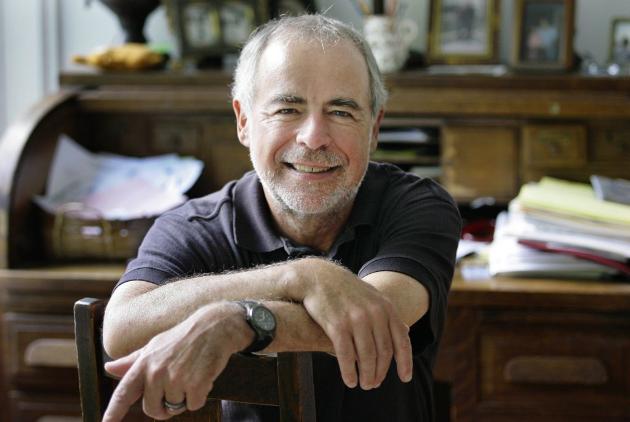 Here’s a nice essay about memoir-writing by Adam Hochschild.

I met Pete Dexter last fall when he was in New York promoting his seventh novel, Spooner. Dexter was a wonderful newspaper columnist and is now one of our greatest novelists. First thing I noticed about him was that he was wearing a pink Yankees cap. So when I had a chance to interview him the Yankees were the first thing we talked about.

Here is our chat, which covers a lot more than the Bombers.

Bronx Banter: I had no idea you were a Yankees fan.

Pete Dexter: No, it’s true. I’m a big Yankee fan. It started out as a way to irritate Mrs. Dexter who is a Yankee fan from way back. And so when they’d win I’d get into it just because it irritated her so damn bad, but then I started to look at them and–

PD: Yeah. So when I found out that it irritated Mrs. Dexter I did it more and more. There have been a lot of teams in my life that I’ve rooted against, but I have never rooted for a team in my life before I rooted for the Yankees, including teams I played on.

BB: And the Yankees of all teams.

PD: Yeah, strangely enough. I didn’t even like baseball until the mid-’90s. And I enjoy it more every year. We get all the games on the cable. It’s the only thing that’s worth all the money I spend on cable.

BB: So can you deal with Michael Kay?

PD: He’s okay, it’s the other two guys from ESPN that drive me crazy.

PD: Jesus, the go on for hours and hours. Morgan was one of the most exciting players I ever saw and just absolutely the most boring human being on the face of the earth.

BB: So, did you want to be a writer when you were growing up?

PD: No, never. I took two writing classes at the University of South Dakota but it was just because I found out that I didn’t want to be a mathematician. I started looking through the student book there and saw Creative Writing and figured if I can’t bullshit my way through that then I don’t deserve to graduate, even from the University of South Dakota. But I never took it even semi-seriously. I mean I didn’t read anything until…it’s a true story than when I wrote Deadwood [Dexter’s second novel], my brother Tom called me up and said, “You’ve now written a book longer than any book you’ve ever read.” And that was absolutely true. I stumbled into a newspaper office in Fort Lauderdale. I was 26 or 27 years old and in those days you could actually stumble into a newspaper office and get hired as a reporter. But I don’t have to tell you what it’s like now.

BB: Did you take to reporting pretty quickly or was it just another job?

PD: I hated it. They had me doing–I thought it was a joke actually at first–they came over the first day and gave me a list of seven or eight things and said, “These are your beats.” And I thought it was some kind of initiation rite. You know, juvenile court, the hospital district, poverty programs and tomatoes. There was agricultural products—tomatoes was a separate category. But there were literally seven or eight of them, none of which interested me even remotely. Hell, they gave me a county health thing and there was a doctor who ran the county health department. He was a nice guy and I’d call him up every Sunday night when I came in and ask him if he could stretch something into an epidemic. And he’d say, “Well, we’ve got four cases of measles…you could call that an epidemic.” So every Monday I’d have a story in the paper about a new epidemic. The bigger paper down there was the Fort Lauderdale News. It got the big guy there fired because I kept coming up with new epidemics and he couldn’t come up with any.