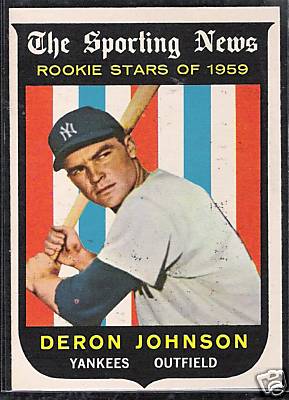 When Deron Johnson died in 1992, the notion of baseball mortality really started to hit me. Oh, I had already been assaulted with the tragic mid-career losses of Roberto Clemente and Thurman Munson, but their deaths had occurred while I was still a child, when I still didn’t fully appreciate life and death. By the time that Johnson died, I was 27 years old and working fulltime. Here was a guy I remembered well from my earliest days watching baseball. Deron was strong, sizeable, and seemingly unconquerable.

A burly right-handed slugger who won the National League’s RBI title in 1965 with the Cincinnati Reds, Johnson died in the spring of ‘92 while still employed as the batting coach of the California Angels. Johnson, only 53, had been diagnosed with lung cancer the previous June. After the diagnosis, Johnson asked the Angels’ beat writers not to mention his illness in print. He continued to coach while carrying an oxygen task with him. For those player and coaches who knew him, such toughness was typical of Johnson. Even after he became too ill to coach, he continued to refuse hospitalization and treatment because he wanted to live out his remaining days at home. Once again, for those who knew him, such a decision typified a family man like Johnson.

Throughout his career, Johnson struck a gruff, intimidating pose. (Like Alex Karras in Blazing Saddles, he once punched a horse, which had kicked him.) In reality, Johnson was a soft touch, a likeable man who developed a close rapport with teammates, and later as a coach, with his hitting pupils. Johnson was so well liked, by both players and front office types, that the Philadelphia Phillies once dealt him to the Oakland A’s as a way of helping him earn a World Series ring. Phillies president Paul Owens received only minor league utilityman Jack Bastable, a non-prospect who would never make the majors, in return from the A’s. Owens could have held out for more, but he wanted to send Johnson to Oakland, where he would have a better chance to play in his first World Series.

The A’s didn’t disappoint Johnson—or Owens, for that matter. The A’s won both the American League West and the Championship Series, where they disposed of a very good Baltimore Orioles team to launch themselves into the World Series. Johnson didn’t just accompany the A’s as window dressing, either. Playing a role as a pinch-hitter and part-time first baseman, Johnson batted .300 for the A’s in their 1973 World Series victory over the Mets. For a quality player and generally good guy near the end of a long playing career, it was a fitting and just reward.

Though he’s best remembered for his days with the Reds and Phillies, Johnson actually began his career with the Yankees. Emerging as a top prospect at a time when the Yankee farm system had started to go barren, Johnson was dubbed “another Mickey Mantle” by some of the New York baseball writers and splashed onto the major league scene as a third baseman in 1960. In addition to the unfair comparison, Johnson faced two major problems. As a third baseman, Johnson made a good first baseman; at 210 pounds, he lacked the agility and range needed for the hot corner. He also faced a roadblock in Clete Boyer, the veteran mainstay who had made fielding at third base an art form. So in June of 1961, the Yankees packaged Johnson and right-hander Art Ditmar, sending them to the Kansas City Athletics as part of an unending wave of trades between the two franchises. In return, the Yankees received only journeyman left-hander Bud Daley, making this one of the few bad deals that GM George Weiss ever made with Athletics owner Arnold Johnson.

With a little more foresight, the Yankees would have held onto Johnson and done what the Reds eventually did: make him a first baseman. Johnson would have been a perfect replacement for Bill “Moose” Skowron, who had just turned 30 and would see his time with the Yankees come to an end within two seasons. If only Johnson had been allowed to spend the bulk of his career in pinstripes, the Yankees might not have suffered the frustration of watching an over-the-hill Mickey Mantle struggle at first base, followed by a mediocre succession of Danny Cater, Johnny Ellis, and Ron Blomberg.

The Yankees would have also benefited from having Deron Johnson, a dignified man and a good teammate, around for a long time.

Bruce Markusen can be reached via e-mail at bmarkusen@stny.rr.com.

To be fair, the Yankees had a young Joe Pepitone at the time they traded Johnson (whom I always confuse with former Bosox manager Darrell Johnson, who also played for the Yankees and Reds in that era).