Burt Lancaster had been a movie star for nearly forty years when he appeared in Scottish director Bill Forsyth’s Local Hero, but it’s probably the film that first made me a Lancaster fan. I’m sure I’d seen him before on TV – a movie of the week airing of The Island of Dr. Moreau, or on HBO’s heavy rotation of Zulu Dawn – hell, maybe even a Million Dollar Movie broadcast of John Frankenheimer’s excellent thriller, Seven Days In May. Regardless, while I knew the name and face of Burt Lancaster, he’d never meant anything to me until Local Hero hit cable TV a short while after its 1983 release. I was just old enough to appreciate its charms and to become a fan of its legendary star. 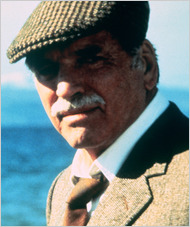 Local Hero finds a Houston oil company yuppie, MacIntyre (Peter Riegert), sent to Scotland by his employer, Knox Oil & Gas, to purchase an entire town and its bay for a new refinery. The research and planning has been done, all that’s left is for the deal to be made with the locals. MacIntyre gets the job due in part to last name. However, he confides to his friend that his parents were Hungarian and they adopted the name MacIntyre because they thought it sounded “American.” That detail gives you some sense of the world view of Forsyth’s film.

This is a true gem of a movie: gentle, but pointed, moody, but hopeful and eccentric and funny without trying too hard. Local Hero gives the viewer the illusion of comfort of familiar terrain while actually being quite unlike any other film.

Forsyth, who had already had one sleeper hit the previous year with Gregory’s Girl, has said that without Lancaster’s star power, the film would likely not have been made. Lancaster plays the CEO of Knox Oil, Felix Happer and though he’s on screen far less than Riegert, he creates a truly memorable character. Lancaster was no longer the acrobat or chiseled tough guy of his youth, but he’d grown into an even better actor.

Happer has some of the qualities we’d expect of the CEO of a massive oil company: he’s a narcissist and a bully. However, he’s got a couple of somewhat endearing quirks, most prominently his fascination with astronomy. When MacIntyre visits Happer for last minute instructions on the deal before flying to Scotland, Happer seems only interested in making sure MacIntyre will call him personally at any time if he witnesses anything unusual in the heavens – especially in Virgo. This sets up the beautiful sequence of a drunken MacIntyre’s rapturous phone call to Happer as he witnesses the aurora borealis for the first time.

Lancaster and Riegert both deliver layered, nuanced performances that keep the delicate balance of whimsy and cold reality in play. (Happer may be a boorish oil billionaire, but you’d like to think that if he ran BP, the current disaster in the Gulf of Mexico would never have played out like this.) Lancaster’s comic touch in his dealings with his quite possibly deranged psychoanalyst is especially deft and charming. 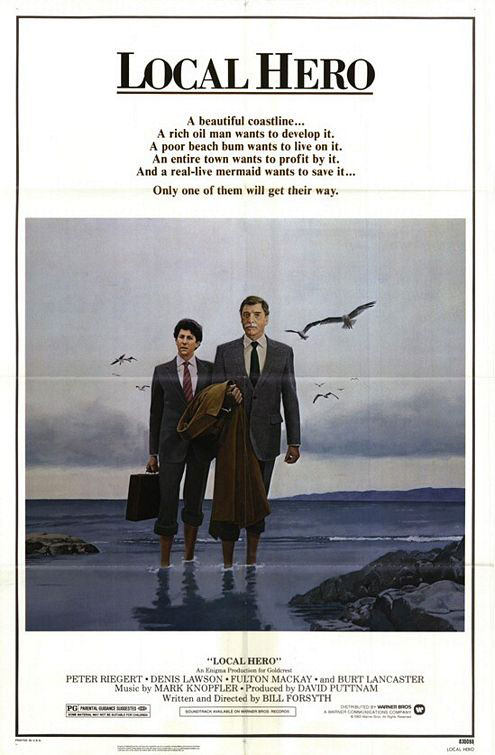 While in Ferness, the sleepy fishing village in Scotland, Knox intends to buy, the formerly cynical MacIntyre and his Scottish Knox liason Oldsen (Peter Capaldi, brilliant in last year’s In the Loop) become completely charmed by the little seaside village and its inhabitants. They almost can’t bear to do what they’ve been sent to do. While the oilmen have an attack of conscience, the locals can’t wait to sell out – as is noted in the film, “You can’t eat scenery.” 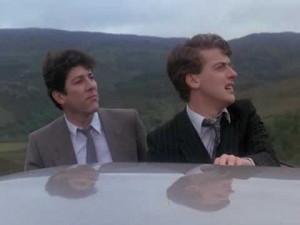 What makes Forsyth’s film so endearing is that it’s never cloying. The village locals are colorful, but never in a phony, central-casting sort of way. Denis Lawson, known in the U.S. largely for appearing in the Star Wars movies as Wedge and being Ewan McGregor’s real life uncle, also stands out as lawyer/saloon keeper Gordon Urquart, whose wife Stella bewilders MacIntyre. The inhabitants of Ferness act like real people and so do MacIntyre and Oldsen. Critic Roger Ebert noted in his original review of the film: “…what could have been a standard plot about conglomerates and ecology, etc., turns instead into a wicked study of human nature.” 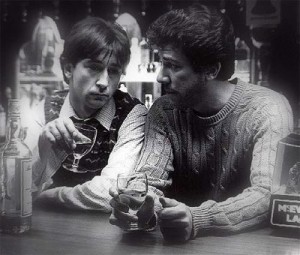 While Local Hero wasn’t any sort of big box-office hit, over 25 years later, it’s become a beloved classic. As for the film’s enduring charms, Forsyth has claimed he simply didn’t know how to make a more manipulative film. In an interview with the Guardian in 2008, he said:

“I hesitate to use the word ‘innocence’ about it, because the characters have attitude, have stories, have views, I don’t think it was too innocent a film. But if there was a layer of purpose or intent missing, a layer of manipulation – here’s where we want the audience to feel this, or that, I’ve always truly hated that – then, perhaps, that’s been its secret, if you like.”

True to its spirit, Local Hero manages to have a happy ending, although it’s a close call. We’re as sad as MacIntyre is to leave Ferness. When he makes that final call to the public phone box by the beach, he’s doing it for everyone in the audience as well.

Thanks for Lancaster week Alex. And another movie to add to the queue. What made you decide to have this week in the first place?

I dunno, Lancaster just seemed like a good place to start. I remember LOCAL HERO being on cable too, but never saw the whole thing. As a kid it seemed dull to me. But I will check it out.

I like the idea of theme weeks, and want to keep em coming, for actors, character actors, directors, DPs, and other stuf like say, "Worst Date Movie," "Laugh Out Loud Movies" etc.

[2] i thought he was a great choice because the movies you ended up choosing were well-known but maybe not as widely seen - i've added 3 of 5 to the queue.

[1] And obviously that was thanks to Alex for the week and thanks to Matt for the review.

[2] I know the banter is a baseball site, but these "tangents" (for lack of a better word) are wonderful. Keep 'em coming. I feel like a little kid in the back seat of the car, listening to the grown ups talk about things I don't quite understand, absorbing as much as I can. Kinda neat, after all these years.

To all who posted this week - my thanks. I look forward to more.

this was really enjoyable, and come to think of it...how underrated a character actor is Peter Reigart? He's never been bad in anything

6) Thanks! I've always written about non-baseball things here but increasingly so because after 7.5 years, it's damn hard to generate excitement daily about baseball. That's why it's so cool I've got a bitchin crew to help hold that stuff down. But this movie stuff is great because most all of us Banter writers really dig 'em, and I think this is a nice platform for them to write about them. And while sometimes I'll assign or suggest movies within a theme, mostly, I'll defer to the writer. You know one week we should do a theme week on one movie just to get five different takes.

[6] Always been a Peter Riegert fan. I think part of the reason National Lampoon's Animal House has held up so well is that they were smart enough to cast it with talented young actors instead of just comics - Riegert, Tom Hulce, Bruce McGill, et al.

I'm waaay late to this and probably talking to myself. But...

For the record I have to say I love this movie. Probably in my top 5. I know it isn't a great movie. But I love the melancholy sensibility. And all its quirks.

A friend of mine directed a reading downtown and few months ago and Peter Riegert was in it. I got to meet him after and told him that Local Hero was one of my all time favorite films.

He seemed delighted (or was maybe just happy/relieved I didn't say Animal House) and was really gracious about my fan moment. Cool New York City guy. (I believe he grew up in the Bronx.)