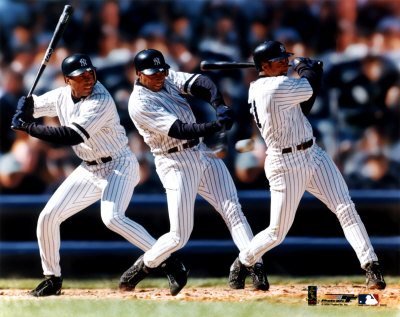 Bernie Williams is the best of this year’s crop of players that will be considered for the Hall of Fame. But as Rob Neyer points out, he isn’t good enough:

There’s a case to be made for Bernie Williams. For roughly 15 years, he played center field for an excellent team. He scored 100 runs eight times, and drove in 100 runs five times. Sure, his teammates helped in those areas. But Williams’ .297/.381/.477 line is quite lovely for a center fielder.

The problem for most of the voters will be Williams’ counting stats. Because he didn’t really become an every-day player until he was 24 and was finished at 37, he didn’t pile up a ton of hits or homers or RBIs. And while he does have nearly a full season’s worth of postseason statistics — for which he deserves some credit — he has few memorable October moments and overall his stats are right in line with his regular-season numbers.

That’s why he won’t get much support from the voters.

Should he, though? Based purely on his position and his hitting, I would rate him a borderline candidate. The problem is that his defensive statistics were terrible. Yes, I know he won four Gold Gloves. Derek Jeter won five. These facts say a lot more about the idiocy of the process than about Bernie Williams and Derek Jeter.

According to Baseball-Reference.com, Williams was a slightly below-average center fielder. According to FanGraphs, he was a terrible center fielder. Oddly, though, both sites come up with the same answer about his overall value: 47 or 48 Wins Above Replacement. And that’s just not a Hall of Famer.

Here’s something fun to chew on: Who has the best case of the all the Yankees who have not made the Hall, including Munson and Mattingly? Got to think Bernie ranks near the top of that list.

Who has the best case of the all the Yankees who have not made the Hall, including Munson and Mattingly?

Because so many of his friends will make the HOF, then I think Bernie is the more logical choice because at some point Jete, Mo, ARod, Posada (potentially) will lobby for their boy.

All their lobbying in the world won't mean spit.

[0] "Who has the best case of the all the Yankees who have not made the Hall, including Munson and Mattingly?"

Munson's case is (sadly) built on the end as much as anything else. The shortness of his career makes his counting numbers look pretty bad, even for a catcher, and if you project based on his last season and a half . . . you would not have expected him to play much longer, or to play well. He could have surprised, but of course we'll never know.

Bernie, I think, has the best case. I don't think he was as poor a defender as the b-r.com and Fangraphs numbers make him out to have been, though he certainly was poor at the end. Very consistent, great peak for a CF (not Griffey-Mantle-Mays great, but you don't have to be those guys to be a Hall of Famer), and of course the rings and postseason performance will help. Ditto his professionalism and "clean" reputation.

If the veterans committee pool did not include so many closed-minded troglodytes, I think the second best case clearly belongs to Willie Randolph. It would take a wholescale revision of the composition of the veterans' committee voters to even get his name up for consideration, though. Sigh. He might have a better case than Bernie.

I can't imagine why anyone would use defensive metrics to judge players from the past. There is much dispute about whether they are accurate now, even with the improved technology and collection processes, but to seriously consider older ratings make me doubt whether people citing such numbers really understand what they mean.

From an offensive standpoint, Bernie Williams is a Hall of Famer, and I see no reason to think his defense brings him beneath the borderline.

[4] i was wondering what you were thinking and hoping you'd chime in. good points, per usual. i'm totally down with bernabe making the hall!

tim raines better get the fuck in, period.

[5] Tim Raines doesn't exactly scream YANKEE but he's the best player not in the HOF by a mile.

6) I love Rock, and love his case for the Hall but a mile better than Ron Santo and Jeff Bagwell and Barry Larkin?

Bernie was awful in CF at the end, but I always thought he was pretty good when he was younger. In fact, I thought he put up a few years of superior zone rating (highly flawed, I realize) to Griffey, who was widely hailed as an excellent CF.

I'm not sure if Bernie is HoF worthy. I'm a small hall guy, and I am not sure he did enough over his career to get in. Keep in mind that he was also injury prone: he played 150+ games only twice in his career. In his best season, 1998, he played in only 128 games. Overall, I tend to think that he just misses the cut. That said, he could hit and he played a premium defensive position )even if he was not great), and I think that his case is well ahead of Donnie's and Munson's.

Bagwell, on the other hand, was a beast. Unfortunately for him, the competition within his own era is fierce (McGwire, Thomas, Thome) and there is that ol' PED cloud.

Neyer uses the fact that Bernie has almost an entire season of postseason stats at his excellent regular season level as an argument for why he won't get in? The fact that Bernie ripped the elite postseason teams is the best argument he's got for the hall of fame. His offensive rates are excellent, but in that era, he doesn't stand out as much because offense was so jacked up.

[10] But even compared to the crazy offensive context he was a very good hitter: 125 OPS+ for his career, with a seven or eight year peak that was downright excellent. HE certainly was one of the best hitters at his position--a premium defensive position--for most of his career. Now, I am still not sure that he was excellenter enough to get into the HoF.

Who is the competition at his position? Griffey and Edmonds, I guess.

Bernie is probably my favorite Yankee ever so believe me nothing would make me happier than to see him in. But I think at BEST he's a borderline case, and even that is a generous stretch.

I could possibly see a big Veteran's Committee push for him something like 20 years down the road when guys who played with/against him are in, that wouldn't totally shock me. But that is a long way off obviously.

as for Munson and Mattingly:

Munson is a flat "No" for me. The peak was simply not long enough, by '78 he was breaking down and there was no reason to think he would've rebounded in '80-'82. Yes I know a switch to 1B may have lightened the load for him, but clearly we can only decide based on what we have. And what we have just isn't enough.

Mattingly is an interesting case, especially when you bring the Kirby factor into the debate. But Kirby played a premium defensive position, won two championships (as a key part of the team), and never really had a "decline" phase of his career. If Donnie could've tacked on 2 or 3 more big years he'd be in better shape, but I just don't see it.

Raines: obviously Yes.
Bernie to me has a much better case than Mattingly or Munson.
But I'm going to have to go a little further than Shaun P. at [3]. Willie Randolph is a clear Hall of Famer to me. He has a stronger case than Bernie. Willie wasn't Hornsby or J. Morgan, but he definitely belongs with the 2B group that is in already.

[14] [15] I love Willie, and he was greatly underrated offensively (because so much of his value came in OBP), but still, looking at the crude tool of OPS+, he was a barely better than average hitter, with only one truly excellent season (1980) and a couple of very good seasons (1987 and 1991, both times playing only about 120 games). Maybe also 1978.

I am embarrassed to have forgotten Raines in [3], because he has the best case of all. I blame the time of night. =)

[14] I would put Willie in - but he was my favorite as a kid and so I know I'm not very objective when it comes to him. I don't think the voters ever will, which is a crime.

That would suggest, to me, a Hall of Fame 2B, but I don't know the standards.

Jay Jaffe looked at Willie via JAWS and found him just a bit short on the numbers (high standards at second base), but I'm a not-too-small Hall guy, so I'd be OK with it.

[6] funny, i wasn't really thinking of raines as a yankee at all when i typed that. more of a general hall thing. he NEEDS to be in, period.

[7] Wow. Larkin was pretty great. Still....Raines played 300 more games with equal average stats and better totals. Bagwell was a beast who hit for a similar .29X average and a LOT more power but I have no idea how power hitters from that era will be viewed by HOF voters. All three players are hurt by having lifetime batting averages in the .290s, nevermind that all three scored runs (the object of offense) in gobs.

And thank you for pointing out my American League bias! I just am far less aware of the NL and NL players and storylines.

Hmm, to me Bernie and Donnie are near misses. Personally I'd like to see them in, but that's due to my fandom. I think they needed 3-4 more years of sustained excellence.

Unless someone is so obviously bad defensively, e.g. David Ortiz, I tend to downplay defensive statistics as I don't feel we still have a good handle on them. A lot of it is dependent on the type of pitchers that are on the staff -- lots of fly-ballers, and outfielders are going to have more chances and chances for things to go wrong. A staff of Chien-Mings, and the shortstop is going to have more challenges. Now, if you've got a wizard with the glove, a la Ozzie Smith, then I factor it in.

How long until pitchers and catchers?