Observations From Cooperstown: The Yankees and the 1971 Winter Meetings 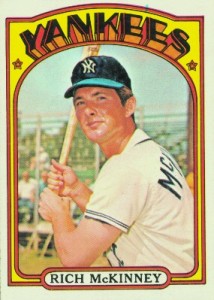 I’ll be completely honest with you. This has been the dullest Yankee offseason I can remember. There might have been an off-season in the early 1990s, when the Yankees couldn’t convince any top notch free agent to take their money, which might have been just as dull. But that’s about it.

There aren’t even any worthwhile rumors making their ways through the Internet. I don’t think the Yankees have any real interest in trading Jesus Montero (and other commodities) for Gio Gonzalez, which was rumored last week at the winter meetings. Their bid for Japanese sensation Yu Darvish will reportedly fall short of what will be needed to sign him. The Yankees supposedly have no interest in Matt Garza. It doesn’t seem the Yankees have much interest in anyone, either because the player is too costly, or the other general managers continue to ask Brian Cashman for 150 cents on the dollar.

The situation was far different 40 years ago. In the days leading up to the 1971 winter meetings, the Yankees were involved in rumors on multiple fronts, as they searched far and wide for a new third baseman and right fielder.

The third base situation had become particularly sticky, with the Yankees having grown completely dissatisfied with the play of Jerry Kenney. The Yankees talked to the Angels about Jim Fregosi, an All-Star shortstop who was deemed capable of playing the hot corner. They talked to the Twins about Cesar Tovar, a little pepperpot of a player who could also provide backup at second base and the outfield. The Yankees even talked to the Dodgers about a young Steve Garvey, who was still a scatter-armed third baseman who had not yet been moved to the other side of the diamond.

The Yankees also exchanged ideas with the Cubs for new Hall of Famer Ron Santo, who was being made available by Chicagofor the first time. According to the rumors of the day, the Cubs wanted a young catcher and some relief pitching for Santo. The Yankees could have parted with a veteran reliever like Jack Aker or Lindy McDaniel, but there was no way they would have surrendered a young Thurman Munson for an aging Santo. Therefore, no trade took place. And as it turned out, Santo had only two productive seasons left in him, before he fell off badly with the White Sox in 1974.

On the outfield front, the Yankees attempted a run at an Oriole institution, a future Hall of Famer in Frank Robinson, regarded as the spiritual leader of the Birds. One of the rumored Robinson deals at the winter meetings had the Yankees sending veteran left-hander Fritz Peterson toBaltimore. The Yankees would have loved nothing better than to put Robinson in right field, next to Bobby Murcer in center and Roy White in right, giving them one of the game’s premier all-round outfields.

Robinson ended up being traded, but not to the Yankees, partly because ofBaltimore’s leeriness about trading within the American League East. The Orioles instead sent Robby to the Dodgers for a package of four younger players, in a move the O’s would soon regret.

Similarly, Yankee deals for Fregosi, Tovar, and Garvey also fell through. And that was a good thing, thanks to the benefit of hindsight. Sent to the Mets in the ill-fated Nolan Ryan deal, Fregosi flopped in making the transition to third base and was done as an All-Star caliber player. Tovar was also near the end of the line; after being traded to the Phillies, he would become a utility man before making a brief pitstop with the Yankees in 1976. In contrast, Garvey had plenty of value left, but not as a third baseman. An arm injury convinced the Dodgers to move him to first base, where he became a perennial All-Star. Garvey certainly would have helped the Yankees at first base (another problem position), but then again, his presence would have eliminated the trade for Chris Chambliss, perhaps negating the dramatic finish to the 1976 American League pennant.

The Yankees ended up making two trades at the 1971 winter meetings. They sent two young pitchers to the Rangers for Bernie Allen, who would become a utility infielder. More significantly, they did make a deal for a third baseman at the meetings, only it was for someone who was lesser known than the aforementioned candidates. On December 2, Yankee GM Lee MacPhail sent reliable right-handed starter Stan Bahnsen to the White Sox for a young utility infielder named Rich McKinney, who had batted .271 (with a .377 slugging percentage) as a part-time player. The Yankees immediately announcedMcKinneyas their new third baseman. The reaction to the deal was nearly unanimous: the Yankees had panicked and had made an awful trade. Angry fans flooded the Yankee switchboard with calls of complaint. Some fans even called up newspaper writers to vent their anger.

One fan complaint, printed in The Sporting News, summed up the feelings of frustration. “We were expecting Jim Fregosi, Cesar Tovar, Ron Santo or Steve Garvey,” said the irate fan. “And we wind up with a part-time player for a frontline pitcher. Imagine, the guy wasn’t even a regular inChicago.”

Faced with such stinging criticism, MacPhail offered up the following defense. “Our scouts are sure he can play third,” MacPhail told Yankee beat writer Jim Ogle. “I think he’s going to be one helluva hitter.” Perhaps MacPhail was influenced byMcKinney’s .379 average against the Yankees in 1971, when he rapped 11 hits in 29 at-bats.

Both the scouts and MacPhail were wrong. In only his sixth game as a Yankee, McKinneymade four errors, against the rival Red Sox no less. He hit a grand total of one home run. By mid-season, he was back in Triple-A. At the end of the 1972 season, the Yankees cut their losses by sendingMcKinneyto the A’s for a still useful Matty Alou.

Aside from his four-error debacle atFenwayPark,McKinneybecame best known for trying to score marijuana from Yankees public relations director Marty Appel during the team’s winter caravan. Appalled and shocked at the request, Appel toldMcKinneyhe couldn’t help him.

So the one big trade the Yankees made at the 1971 winter meetings turned into a disaster. Clearly, it was a trade they could have done without.

Hey, maybe Brian Cashman is playing it right. Making no trades might be the way to go.

I'd rather have no trades than bad trades.

[1] absolutely. i'm more than fine with a quiet offseason.

I double taked on that picture of Rich McKinney and thought, "Mark McGwire....skinny....no roids yet...poor bastard....why is he airbrushed on a '72 Topps card?"

McKinney has quite a chin, too. Sort of like Bruce Campbell, or maybe even Jay Leno.