The End of the Affair

Graham Greene was one of the first novelists that I liked. I think I read three or four of his books before I was twenty. I haven’t revisited him in a long time but he came to mind when I read about a new book by Pico Iyer. Check out this excerpt from The Los Angeles Review of Books:

It’s not of great cosmic interest that Graham Greene seems to be writing my life, even as I’m so proud of making it up myself. Or that he reads me better than many of the friends and family members who see me every day do. But what’s more intriguing is that all of us have these presences inside our heads, who seem somehow to shadow us, and in ways we can’t quite explain. “I can’t listen to Joni Mitchell’s Blue,” a friend once told me. “And I can’t stop listening to it. It’s as if she stole my diary and is broadcasting its secrets to the world.” “I’m almost afraid to see what Henry James will write in the next sentence,” another friend says. “Because it’s so close to my life that he might be telling me what I’ll do and think tomorrow.”

These days, in our virtual lives, this sense of spectral affinity may be more intense and unnerving than ever. Every other celebrity seems to have a stalker who feels he’s Gwyneth Paltrow’s other half, if only she would wake up to the fact; and many of us probably know more about Princess Diana or Tiger Woods, at least when it comes to their intimate lives, than about our siblings or parents. It’s almost as if we have one official life, in which we look and sound like our mother or father; but underneath is a more mysterious life in which we’re really closest to Zadie Smith, or that painter who’s produced our portrait without ever meeting us.

One of the writers who was most interested in this secret universe — we dream, again and again, of a place we’ve never seen in life, but almost never of the building in which we live; we meet a stranger at a party, and feel she knows us better than the old friends we came with do — was, as it happens, Graham Greene. At the age of 16, after failing to run away from the school where his father was headmaster, he was allowed (unusually for his time and class) to go and live for six months with a dream analyst in London, and the man’s glamorous wife. For much of his life thereafter he kept a careful diary of his dreams, meticulously indexed, and two of his novels, he said, came straight from dreams. The last book he prepared for publication before his death was a record of his dreams.

And here is a review of Iyer’s book in the New York Times Book Review. 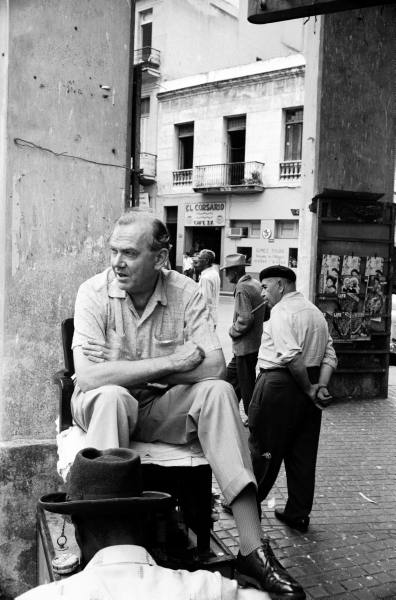 Tags:  graham greene  Pico Iyer  The Man Within My Head

I dig Graham Greene, although he's a bit Catholic and Communistic for my taste at times.

Communistic? Nice. Yeah, I don't mind that stuff, though I know many do, because I enjoy his prose so much, clean and lean.

I was going to just say Communist, but I went for the goof.

You are better when you goof.