Second Batter Up Cause the First Got Served 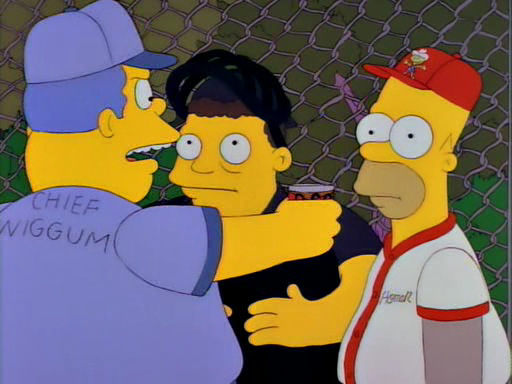 Over at Deadspin, Erik Malinowski has a long piece about the making of the “Homer at the Bat” episode of the The Simpsons. Worth checking out.

For all the years I lived in Portland and all the fun stuff I did there, I will never forget my quest to find 742 Evergreen Terrace. I had ridden my bike up to the top of Nob Hill one Saturday morning -- that's the one you see in the background of the show's opening sequence when Bart cruises by on his skateboard. It's actually a mountain, a little over 1,000 feet above downtown Portland.

I was tired from the climb, and I knew satisfying this little goal of mine would give me a good excuse to head back down the hill without further work. So I zig-zagged my way down slowly through the steep streets. I stopped to check my GPS often, because I wasn't going to climb back up again if I passed it.

Eventually, I came upon Evergreen Terrace, a short dead-end street buried deep in the fir trees about half-way down the hill. I rode up the street checking the house numbers, but they were all five digits. They had been re-numbered years ago, and none ended in 42.

So I did what any idiot would do in this situation, I looked for a house that resembled the Simpson house. Not surprisingly, none did. After a couple of passes, I noticed a guy eyeing me while he raked his lawn. I went over to him and asked sheepishly, "Which one used to be 742?" He pointed two houses over.

It was a white split level. Like most of the other houses on the street, it was relatively modest with huge mature evergreen trees in the yard and a driveway on the side. It was probably a great buy 40 or 50 years because it was no doubt worth quite a bit of money now thanks to its amazing location close to downtown Portland in a quiet neighborhood with great views of the city. Still, it was essentially nondescript and middle-class.

As I stood in the street straddling my bike and staring at the house, I imagined the real Homer doing yard work and the young Matt hoping on his skateboard for a ride down the hill to school. An older lady came to the window and peered out. Mrs Groenig, I was sure. Matt's mom. AKA Marge! I waved excitedly, then suddenly felt foolish for gawking at this nice old person. I sped off down the hill, satisfied that I had found the real Simpsons' house.