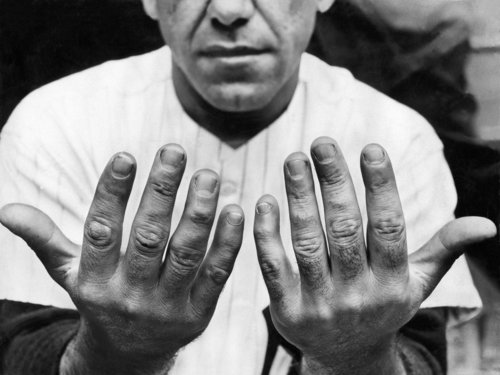 From George King III in the Post: Hiroki Kuroda has been given a spot in the starting rotation. C.C. Sabathia, of course, is the ace. But nothing is a lock for the rest of the fellas:

Barring an injury, Girardi is going to have put somebody in the bullpen — Hughes, who has 49 relief appearances, and Garcia are the favorites — or send a pitcher to SWB.

“I am not trying to cause a stir,’’ Girardi said. “I am making sure that when we leave spring training we are taking the five best. And to be fair, there are no guarantees.’’

Girardi recalled Don Zimmer offering advice and is reminded of it every day.

IIATMS runs down their list of the top 30 Yankee prospects.

Mike Axisa looks at the Russell Martin situation over at River Ave.

Rebecca Glass writes about Alex Rodriguez and Mark Teixeira while Steve Goldman fights off paranoid nightmare blues about the Yankees’ offense over at the Pinstriped Bible.

And over at Lo-Hud, Chad Jennings provides the notes of the day.

Via Pete Abe in the Boston Globe, Joe Girardi had some nice words for Jason Varitek who recently announced his retirement. Meanwhile, right on time, Bobby V is lobbing verbal grenades across enemy lines.

It's so instructive to compare Girardi's comments on Varitek with Valentine's latest nonsense.

Every couple of years, Valentine emerges onto a new stage (TV, Japan, back to managing the bigs, etc.) and in the moments when it all feels new, we hear so much about his puckish charm. Then he settles in and we all remember: Oh, right, classless tool.

Jeter iced the response: "Why are we talking about this?"

Yeah, Bobby is a gnat.

I honestly ignore any article that features Valentine in the headline.
I wouldn't pay attention to his comments even if he made them at my dinner table.
Irrelevant putz.

RE: The possibility that the offense collapses. Hopefully, Arod and Teix are better than last year and that keeps the team scoring in 2012. But in the coming years they will need help, sooner rather than later, and I don't see where it's coming from. Montero is gone. Another potential free agent is off the board as Zimmerman signed.

Acquiring a lineup anchoring hitter, and probably has to be an OF, is the number one priority from this point forward.

This is all good strategy by Bobby V. He's putting the focus on himself and the Yankees and taking it away from the Sox players and KFC-gate. Smart.