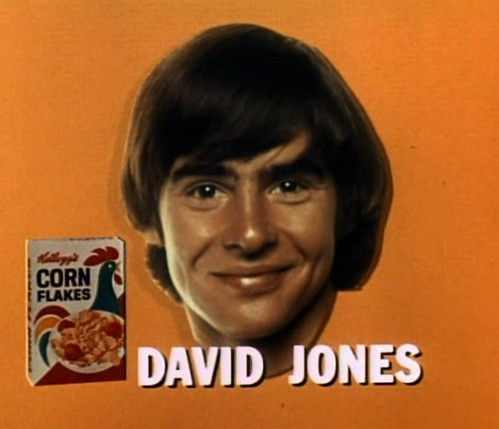 Great typo in that USA Today story - they say the other Monkees were Mike Nesmith, Mickey Dolenz and Peter TOSH! That would have been something!

Sad to hear about Davy. The Monkees made great pop records and HEAD is a genuinely odd and cool movie.

Also, the TV show brought me so many smiles growing up.

Yup, that was a great show. Here's some randomness for you. I took two guitar lessons from Peter Tork in the summer of 1985 right before the Monkees had their comeback. I remember asking him who was faster: Clapton or Hendrix. He said Clapton, easily. But that he wasn't as great an artist as Hendrix.

The comic actor Andrew Daly had a great line about The Monkees on Twitter today:
"There was a time when an irreverent, trippy TV show featuring 4 legitimate talents was considered the height of crass commercial plastic."

I know the BB likes a good pun.
"I'm a bereaver.'
I won't take credit for this but I saw it somewhere else today.

[3] Great guitar story. P. Tork knew what he was talking about.
[5] Can be used again someday in the future when Mr. N. Diamond checks out. (Was going to say "turns out his heart-light" but that would probably actually be crass.)

[3] On pure speed, Alvin Lee, J. Winter, and a bunch of others were faster. But as we all know, control and command are more important than speed. If you listen to 'Axis Bold as Love' a bunch, you'll understand that Hendrix was in a league of his own.

[3,8] Funny though, I never think of Clapton as being "fast." Clapton's strength is his taste and timing. He knows when NOT to play a note and at his best he gets amazing emotion out of a simple line (ala Albert or B.B. or Freddy). And yeah, Alvin Lee may have been faster and maybe Jimmy Page, too.

Hendrix was just something else - I know now it's silly to compare him to anyone or anyone to him. He was just...Jimi.

I had a huge crush on Davy back in the day (gulp!). What a bunch of knuckleheads, but I loved the show. So zany. Mickey Dolenz, shees.

[11] Name mixups are fun. For years my sister thought Cliff RIchard was a member of the Stones..

Hendrix was the One & Only.

Hendrix opened for the Monkees on tour. Head was a psychedelic revelation that made a big impression on this 12 year old at the time. The film was co-written by Jack Nicholson btw.

I didn't like Davy so much as he was irrationally idolized by my female contemporaries, I preferred Mickey Dolenz who sang the best songs. But, Davy was the funny one on the show and had that Carnaby British hipness and a short stature that I could identify with.

The Monkees were cool in a popular culture way, a first of a kind on the TV networks. And the songs, admittedly written for them were gold standard hits that still sound great.

RIP Davy, so sad, and selfishly this reminds me of my own mortality. Here we come, hobbling down the street....hey hey we're the Baby Boomer Seniors.

Can't compare Hendrix to anyone. He played guitar like it was a keyboard, and did things that were uniquely his. Imagine if he lived and produced music in the electronic age?

[13] I'm a Mike Nesmith fan, first and foremost, but how can you not like Davy? Just so funny and likable. Yeah, that British hipness, definitely.

[12] Well, yeah, Clapton's records have largely been a dead zone for a long time. He can still bring it in performance though when he's inspired (usually if you put another great player on stage with him, e.g. Jeff Beck or Derek Trucks). Clapton's impact in the 60s is so immense he can't be overlooked - he changed the sound of rock'n'roll in ways he doesn't always get credit for. And, damn, the Derek & The Dominos album.

Would Jimi have never put out sub-standard material had he lived? Hard to imagine, as all the greats have had their lemons and creative swamps. But that's part of Hendrix's greatness and the mystique - it was a short, insanely brilliant run and his like was never seen before and won't be again!

[12] that's funny. I always get Jack Black and Jack White confused. And yes, I know who is who.

Mickey Dolenz was my fave too, but not dreamy like Davy.

Now, speaking of Derek and the Dominoes, Duane has a place in this discussion. From what I heard, he knew his way around a guitar pretty well.

10) For some reason when I was 14 speed was important.

[17] Yeah, sounds right. When you're that age, its that stuff that wows you.