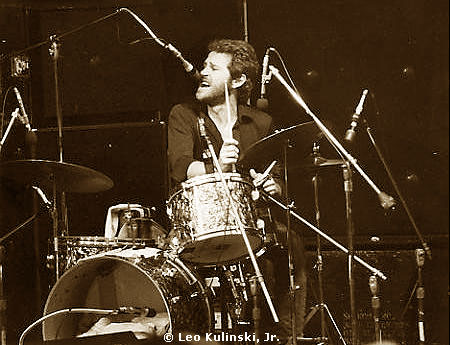 It was a hot summer night very long ago, when my career in this racket was brand-new and distinctly alternative. I was in a beneath-the-sidewalk joint in Harvard Square called Jonathan Swift’s, and I was listening to Levon Helm play with the Cate Brothers, who were formidable players in their own right, and old friends of Levon’s from Arkansas. We were all deep into the howl of the evening when it occurred to my friend and I that we were enjoying the show so much that we really ought to buy Levon a beer. So we ordered one up, and the waitress brought it out to the stage and Levon took a long pull, looked down at the two of us, touched his drumstick to his forehead and said, “Thank you, neighbor.”

It was what they were all about, Levon and the rest of The Band, in 1968, when the country was coming apart at the seams. Nothing was holding, least of all Mr. Yeats’s center. There were tanks in Prague and there was blood on a balcony in Memphis, Tennessee. The traditional American values of home and family and neighborhood were being fashioned into cheap weapons to use against the people who saw the death and gore as the deepest kind of betrayal of the ideals that made those values worth a damn in the first place. The music was disparate and fragmented; the Beatles were producing masterpieces that they couldn’t or wouldn’t take on the road. Brian Wilson was long gone, spelunking through the canyons of what was left of his mind. Jim Morrison, that tinpot fraud, was mixing bullshit politics with kindergarten Freudian mumbo-jumbo and his band didn’t even have a damn bass player. Elsewhere, there was torpid, silly psychedelia. The British were sort of holding it together, but, in America, even soul was coming apart. Nothing seemed rooted. Nothing abided. Nothing seemed to come from anything else. The whole country was bleeding from wounds nobody could find.

…He was the true Voice of America, as far as I’m concerned. And, after The Band split up, he kept touring, wrote a hilarious memoir, and then started hosting the Midnight Ramble in his barn in upstate New York. He was as generous with his talent and his time as any artist ever was. There was a message on his website on Tuesday saying that, goddammit, he was in the last stages of a long and brave fight with cancer. I wanted to write all of this before he passed. I wanted to thank him for the way he sang, and for the throb of his drums, and for the way he helped point the way home for all of us who thought we’d lost our country. He brought us back to what was really important: the fugitive grace of a young democracy, that America, for all its flaws and shortcomings, for all its loss of faith in itself and its stubborn self-delusions, was a country that was meant to rock. For that, I return his salute from long ago. Thank you, neighbor. And godspeed.

I totally agree with you Alex. I knew things were getting bad when they started cancelling the Midnight Rambles but this is very bad news. Prayers for Levon, his wife Sandy and his daughter Amy. It's been a pleasure to listen to the man all these years and I will miss him.

Wow, this is terrible. I thought he was winning the battle with cancer. I haven't been this upset to lose someone I've never met in many years. Very moving tribute by Charlie Pierce.

Yeah, this one cuts deep. It's worth noting that Levon was a fine film actor too- Coal Miner's Daughter, The Right Stuff, Smooth Talk & many more.

4) I need to revisit "Smooth Talk." I remember it being an indie hit when it came out and I saw it on VHS when it was first released on tape. Laura Dern, loved her nervous beauty.

I still have never read Levon's book, which I've heard is great. He got Dylan to blurb it (which is impressive in itself) and Bob called Levon "One of the true heroes of my generation."

[3] He has a pretty brilliant little bit in "The Three Burials of Melquiades Estrada".

[5] Levon's book is a must read for anyone who likes The Band, IMO. If Charlie Pierce says its well written, nuff said, right?

[4] I praised it on Twitter yesterday and got a tweet of thanks from Treat Williams! Pretty wild. I haven't seen it in a long time, but I recall loving the performances.

Damn. I loved this guy's music.
Here's one of my favorite post-Band (er Band) things he did.
Owning Springsteen's "Atlantic City"

[10] Oh yeah, that Atlantic City was one of the pinnacles of the post-Robbie Band.

10) He hasn't passed away yet. And fortunately, he is receiving all the love sent his way (we should all be so lucky when our time comes):

Very sad news. Will have to rewatch The Last Waltz Saturday night, and raise a glass. One (of the many) things I've always admired about The Band was that they didn't always do the cheap love songs, but actually put out music that had heft to it.

[12] That's the really nice thing about this all - that people are getting a chance to say thanks and express their love and admiration while he's still here. I just hope he's not in a lot of pain.

I think people respond to authenticity, and Levon oozes that. There's no bullshit - he's just a great musician who loves making music.

been keeping up with this all morning......bummed. i knew he has been sick for awhile.......just watch and listen to this guy play and sing...he's just incredible!......he'll go on forever when he passes!
http://www.youtube.com/watch?v=11Y987Uf1wY