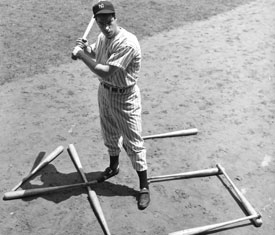 The Yankees beat the Red Sox 8-4 for their sixth straight win, increasing their American Leauge lead to three games over Cleveland. With DiMaggio having already tied Keeler’s mark, the crowd was much smaller, but those 8,662 in the Stadium that day watched as he took the record and stood alone at forty-five games in a row. DiMaggio’s lone hit was a screaming liner that rocketed over Ted Williams’s head and found the left field seats for his eighteenth home run of the season. After the game, a young Williams admitted admiration for DiMaggio. “I really wish I could hit like that guy Joe DiMaggio. I’m being honest.” Williams could hit pretty well himself. He was hitting .401 at the time.

What a strange snapshot of the evolution of fandom. The crowd shows up to see him tie, but no interest in the record breaking game?

Imagine the crowd in Yankee Stadium for game # 57 if Derek Jeter had a hit in the previous 56.

But also, nobody really talks about game number 45 now, so maybe they were right to stay home?

[1] From what I gathered, it was the same for Maris' 61; except that the Yanks had already clinched the playoffs and he didn't break Ruth's record in Game 154 as many sports writers demanded he do in order to "legitimize" the record. Fans: always were sheep, always will be (even if they are now some variety of "super-sheep" >;)

[1] Jon, I was thinking the same thing. It simply wouldn't happen like that today. And your comparison is dead on -- can you imagine a tougher ticket in Yankee history than Game 57 for Jeter?