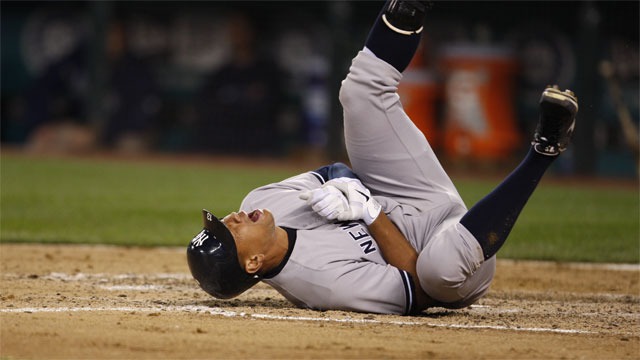 King Felix Hernandez worked out of trouble repeatedly last night as great pitchers often do. Fourth inning, Curtis Granderson and Alex Rodriguez singled and Robinson Cano got ahead 2-0 then fouled off fastball, slider, curve, change-up before popping up for the first out. Mark Teixeira walked but Raul Ibanez whiffed and Eric Chavez flied out. And that’s how it went.

But I’ve buried the lead. The story of the night is not that the Yankees lost it’s that Hernandez hit Rodriguez in the hand on a 3-2 change up–a 90 mph change-up at that–in the eighth inning and the news is not good: a non-displaced fracture. While the Yankees believe that Hernandez hit Rodriguez–or Derek Jeter or Ichiro, intentionally–Rodriguez will not play for the next 6-8 weeks.

“We lost Mo. We lost Andy and now we have lost Al,’’ Jeter told the New York Post. “We will see how good we are. It will be a challenge.’’

The hope is that he’ll recover with enough time to get his swing back before the playoffs. He couldn’t do it last year with a different injury. Either way, it’s a major drag. He goes out 128 hits away from 3,000; 63 RBI from 2,000.

He’s in decline but he’s never stopped playing hard and this year he stole bases and played smart. Another substantial injury for the Yanks to overcome. They can make it, of course, but even as an old man, Rodriguez makes the team better.

When Pettitte and CC went down, the Yankees wisely stuck with interior options and kept winning. And though I would have been thrilled with acquiring Hamels and signing him long term, that obviously was never an option.

Relying on Eric Chavez to play everyday or even everyday against righties is not advisable. He'll be hurt inside two weeks. And then you'd lose his bench bat as well.

Who's available? Hanley Ramirez is gone. Aramis Ramierz? Signed for a long time. Chase Headley? Makes Arod the permanent DH for the rest of his career. David Wright? Would the Mets ever do it?

the only good thing about the last week or so (save the Ichiro get) is that these games have happened on the west coast, out of sight out of mind

His OPS is below his career average, but at this point in his career I'll take it.

this is bad, but I can't help but think it could have been a LOT worse. Hopefully he can get at least two weeks of September games in as a playoff tune-up.

I think he'll get a few games in before the playoffs. I know it's the wrong thing to think about, but each of these injury-shortened seasons are making that HR record seem more and more unattainable. Thought he'd catch Willie Mays this year.

[4] It's gonna take a real effort by Alex and a lot of luck, to be 100% healed and also have him timing back. While his numbers have been disappointing, there is a hole in our lineup when ARod is out. At least with Ichiro on the OF, when Chavy is at 3rd, we still have a platoon ar DH.

6) He'll never get the record and in a way, that might be a relief for him. He should nudge past Ruth if he can stay healthy but I think Aaron and Bonds are safe.

7) Think Cashman has something "bigger" up his sleeve than Ichiro?

I think in the end, it may take the pressure off of him AND the Yankees. Towards the end, when his production really declines, it would've been a decision to hang on to him to put the proverbial butt-in-seat. If he's not even close, I agree, I think big sigh of relief. But man do I hate Bonds.