Here’s a nice long piece by Bryan Curtis on Indiana Jones and the Temple of Doom over at Grantland:

It’s strange when two filmmakers can hardly stand to look at one of their movies. Especially when that film was as lucrative — and, for me, as beautifully sinister — as Indiana Jones and the Temple of Doom. So when I met George Lucas in December, in advance of the release of Red Tails, I asked why he and Steven Spielberg always seemed to be renouncing it.

“Oh, I’m not renouncing it,” Lucas said. Which is fair enough. Lucas mostly sounds sad when he talks about Temple of Doom. It’s Spielberg who recoils from its heart extraction, its human sacrifice, its monkey-brain buffet. He once told a journalist that Temple of Doom was “too dark, too subterranean, and much too horrific.”

“People say, ‘Why’s it so dark?'” Lucas said. Then he began to explain.

“I was going through a divorce,” Lucas said, “and I was in a really bad mood. So I really wanted to do dark. And Steve then broke up with his girlfriend, and so he was sort of into it, too. That’s where we were at that point in time.”

I always liked Temple of Doom–maybe not as much as P. Kael, who gave it an over-the-top rave (after she panned Raiders)–but I thought it was scary and tense.

Here is a blurb of her review:

In this follow-up to Raiders of the Lost Ark, Steven Spielberg creates an atmosphere of happy disbelief: the more breathtaking and exhilarating the stunts are, the funnier they are. Nobody has ever fused thrills and laughter in quite the way that he does here. Momentum has often been the true-even if not fully acknowledged-subject of movies. Here it’s not merely acknowledged, it’s gloried in. The picture has an exuberant, hurtling-along spirit. Spielberg starts off at full charge in the opening sequence and just keeps going, yet he seems relaxed, and he doesn’t push things to frighten us. The movie relates to Americans’ love of getting in the car and taking off-it’s a breeze. Harrison Ford is the archeologist-adventurer hero; Ke Huy Quan plays his child sidekick Short Round; and Kate Capshaw is the gold-digger heroine. The plot involves them with an odious boy maharajah and with Mola Ram (an anagram for Malomar), the high priest of a cult of Kali worshippers who come right out of the 1939 adventure comedy Gunga Din. This is one of the most sheerly pleasurable physical comedies ever made. A Lucasfilm Production, from a story idea by George Lucas, and a script by Willard Huyck and Gloria Katz. The score by John Williams is too heavy for the tone of the film, and it’s too loud. With Amrish Puri as Mola Ram, and Dan Aykroyd in a half-second joke.

Curtis gets  behind what was up for the filmmaker and why the movie was not beloved like the other Indy movies. 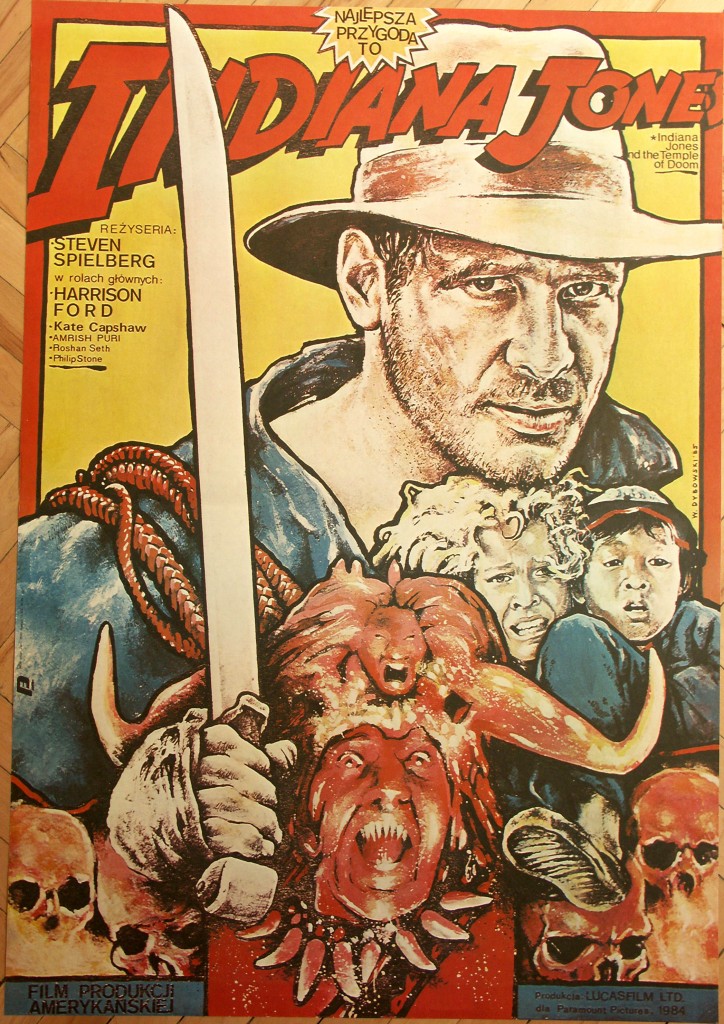 Love the movie - but still cannot watch the bug scene!!!

I can't remember the last time I saw it but I'm eager to watch it again.

The opening scene is terrific. From here, it's a mixed bag. It has some really awful, cheesy parts and some attempts to outdo Raiders fall flat. The dinner scene is offensive and stupid. That said, I prefer it to the next installment. It has personality.

How often do you disagree with PK? I hear someone prefer Temple of Doom to Raiders and I have a hard time believing I'll be interested in anything else that person has to say. Yet obviously Kael's got a ton of interesting stuff to say. How often do your tastes have to mesh together to really feel kinship with a critic? Or is it more important to come together on a few important pieces?

I remember how much Bill James hated Reggie. He was always such a dick to him in the abstracts, so I never bothered much with Bill James when I was a kid.

Some stuff I'm right with P. Kael on but I always thought she was overly harsh on Scorsese after her love affair faded, overly tough on Woody, overly in love with DePalma and Altman.

She liked Doom over Raiders and I don't remember feeling the same way. She also liked Empire over Star Wars and would agree there. She also loved Wrath of Khan, more than I did, but I liked it better than the first Star Trek movie by a ton.

The thing about Kael is that she was so excessive that I liked her even when I disagreed. She usually had interesting things to say.

Some stuff I'm right with P. Kael on but I always thought she was overly tough on Woody, overly in love with DePalma and Altman, Godard and Paul Mazursky.

She liked Doom over Raiders and I don't remember feeling the same way. She also liked Empire over Star Wars and would agree there. She also loved Wrath of Khan, more than I did, but I liked it better than the first Star Trek movie by a ton.

The thing about Kael is that she was so excessive that I liked her even when I disagreed. She usually had interesting things to say.

Count me as unimpressed with Temple of Doom; I don't even remember much about the movie except the outlandish parts mentioned by Hawk which even then I found offensive. Nevertheless, I can see where you can make arguments for either over the other, though I preferred Raiders because it was a modern swashbuckler that unconsciously sent up it's own genre, whereas Temple of Doom seemed very conscious of itself, which kind of spoiled the magic for me.

[5] Another thing is that critics can whiff way more often than regular viewers, who can just watch a movie and enjoy/hate it without having to write something awesome about it under a deadline.

I know that writing about some things has changed my relationship to them, and not always in a way that serves me well.