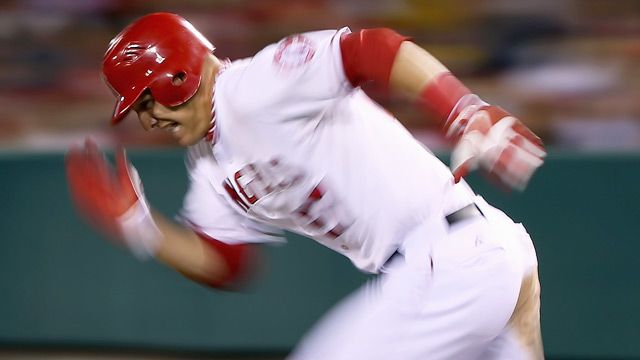 Over at Grantland here’s Jonah Keri on why Mike Trout is the AL MVP and not Miguel Cabrera. That said, Bobby Valentine has a better chance of keeping his job than Trout does of winning the MVP.

Hm. I have seen many more "Mike Trout should win the MVP award" articles than I have "You stat nerds are crazy" articles. Like 20 to zero. So I bet this is at least a close vote.

And though I understand Trout's overall production clearly exceeds Cabrera's due to his vastly superior fielding and baserunning, I do think it should be a closer vote than it would be if you compare WAR values.

Cabrera's a no-brainer: Triple Crown + Playoffs = MVP
Baseball doesn't like to think any further than that, especially when the runner-up can take a Rookie of the Year consolation prize.
No question, I'd take Trout's season over Cabrera's everytime. Far more "valuable" player in every way as I see it.

Didn't Felix Hernandez just win the Cy Young a couple of years back despite not being even close to leading the league in WINS! We've come a long way from Colon getting Mariano's Cy Young in 2005. (Johan Santana was probably the better choice that season, but in a down year give it to Mo :)

That said, it's not like Cabrera is an awful choice.

What's all this about Miguel Cabrera and some complicated dental procedure?

[2] The Triple Crown is a great achievement, but it doesn't make the MVP automatic.

When Pedroia was MVP, his OPS was more than 150 pts lower then the leader.... but middle fielders rarely outproduce corner fielders. Same with Rizzuto and just about every Catcher, SS, 2nd baseman and CF who have ever won the MVP. It has to be SOMEWHAT relative to your position, or middle fielders would almost NEVER Win MVP.

Trout is a CFer, yet his triple slash numbers are not that far below Cabrera's. Trout blows Cabrera away in fielding, blows him away in SBs. has a better RC+ and a better wOBA. And this doesn't count the additonal benefit speed on the bases give you.

Miggy is a 2 tool player. BA and Power. Trout is as pure a 5 tool player as there has been since Mantle. Check out ALL his numbers. They are just sick.

Did Miggy have a great, great year? Absolutely. So did a certain 2nd baseman named Cano.

But Trout OUTPRODUCED everyone... and it isn't really that close.

And lets remember that RBI, a 3rd of the crown, is a team stat. Triout led off (probably the WORST position for RBI) and still had 83! For comparison, Jeter who had a pretty good year, had 53.

A single and a stolen base is almost as good as a double, especially in terms of Total Bases. To calculate extra TBs based on steals, use:
(SB * 1) - (CS * 3). So Trouts steals were equivalent to 47 'extra' total bases. If you recalculate Trouts OPS with those extra 47 TB, his OPS is more then 30 points HIGHER then Miggy's.

[5] PS. This is why Fangraphs wOBA is a better indicator of Offensive production than OPS is.

Most VALUABLE player. Didn't the Tigers overtake the White Sox in the last 6 weeks of the season to take the AL Central, riding the back of Miggy? Oh, and he also achieved the Triple Crown. One doesn't win a triple crown, you achieve it. One does win the MVP.

Cabrera should get the MVP, but I can see the case for NJ's own Trout. At least he will be rewarded with Rookie of the Year. And if you were to ask me, which player would be more valuable right now for the Yankees (or any team), the answer has to be Trout, with 15 years of potential high level performance ahead.

Am I crazy making the distinction between "Best" and "Valuable"?

[7] & [8] It's very hard for me to take that argument seriously when the Angels had a better record than the Tigers.

[8] I think their can be a difference. For example, we have this little known SS, who is a bit lacking on defense, and his .791 OPS was bested by SIX other Yankees. But I would say he was pretty damn valuable to this team.

Miguel Cabrera wasn't responsible for the White Sox being terrible.

By the way, before Trout joined the Angels, they were 6-14. After, they went 83-59, for a .585 Winning percentage. The Yankees finished with a .586 Winning percentage. It wasn't all Trout, as Pujols started slow. Nonetheless, Trout was BOTH "Best" and "Valuable".

[10[ Exellent point Jon. Also, while the Tiggers went 10-5 their last 15 games, The ChiSox went 4-11. That's a pretty serious choke. While Baltimore and Oakland fought like hell, the White Sox handed the Division to Detroit. Detroit's 88 Wins puts them in 4th place in the AL East and 4th place in the AL West.

Not to be condescending, but you really have to be carefully when you use stats like 'Division Winner', 'RBI','Wins','Saves' and 'BA'. These stats obviously have meaning, but rarely tell the whole story and can often be misleading. They really need to be put in context with other stats.

And just another opinion on Miggy vs. Trout.
http://itsaboutthemoney.net/archives/2012/10/04/on-the-a-l-mvp-question/

[10] Then a corollary question is, why did Felix Hernandez win the Cy Young award winning less than 15 games, and playing with a team with the worst record in the AL West?

[14] OK, don't be condescending. We'll see who wins the award, both are worthy candidates. It doesn't matter what you or I think, and even in our estimation that the writers get it wrong.

The shoe has dropped, the fan has been shat on and the inevitable has inevited. Bye, hater...

[16] What's a Cy Young award from the past got to do with an MVP race in the present?

I think I will try to work something up on this in the next few days before the Yankees start up, but Trout's lead on net production can be assailed by valid pro-Cabrera arguments. Unfortunately, there will also be a lot of these invalid arguments mucking up the process. Here are the invalid ones we will hear:

1) The Tigers making the playoffs while the Angels did not.

2) A rookie, who mught be a fluke, shouldn't win it over a vet who is always awesome.

3) This is Cabrera's career achievement award, Trout has many chances in the future.

I will get into the valid ones when I have time to write it up.

[10] Yes, and a much better September record, too -- relevant only because Cabrera supporters seem to be especially intrigued by September.
As Alex [12] says, the great come-back by the Tigers was at least as much a matter of the White Sox choking.

[16] I'm NOT predicting who will win the award.
I'm showing that Trout had a far better year.
My guess is Miggy wins it.

And yet more on Trout vs. Miggy.
http://www.yankeeanalysts.com/