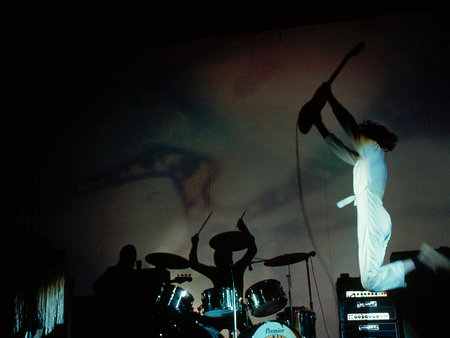 Pete Townshend’s “deeply felt but often ungainly” memoir, Who I Am, is reviewed by Michiko Kakutani in the Times:

What Mr. Townshend does manage to do here with insight, verve and sometimes grandiosity is describe how the Who and its music evolved: how the group “set out to articulate the joy and rage” of the generation that came of age in the “teenage wasteland” that was post-World War II Britain, under the shadow of the atomic bomb and deeply alienated from the established class system. This is why the Who’s early sound — with all the screaming feedback and distortion, the wrecked guitars and Moon’s frenetic drumming — was so aggressive and explosive.

“I wasn’t trying to play beautiful music,” Mr. Townshend explains. “I was confronting my audience with the awful, visceral sound of what we all knew was the single absolute of our frail existence — one day an aeroplane would carry the bomb that would destroy us all in a flash. It could happen at any time. The Cuban Crisis less than two years before had proved that.”

This is Mr. Townshend in his rock theorist mode — familiar to fans, who have read his music essays and reviews, or listened to his ruminative interviews. He speaks candidly in these pages about the influence that artists like the Kinks and Bob Dylan had on him, recalling that when he first sat down to try to write songs for the Who, he isolated himself in the kitchen of his Ealing flat, and listened to a few records over and over again: “The Freewheelin’ Bob Dylan”; Charles Mingus’s “Better Git It in Your Soul,” from “Mingus Ah Um”; John Lee Hooker’s “Devil’s Jump”; and “Green Onions” by Booker T. and the MGs.

He proves equally engaging as a sort of rock historian, describing the musical landscape in Britain in the early 1960s, when rock exploded on the scene. He describes how it upended the old order represented by the swing music that his father, a clarinetist and saxophonist, played in a band called the Squadronaires. And he charts how the Who came to push the boundaries of rock, creating one of the most acclaimed early concept albums (“The Who Sell Out,” 1967) and pioneering the form of the rock opera with “Tommy” in 1969.

As Mr. Townshend sees it, the Who’s ascendance would eventually be undermined by the rise of punk rock in the late ’70s. Though Who songs like “My Generation” and “Won’t Get Fooled Again” became “anthems for a particular time,” Mr. Townshend writes, by 1981 “a gulf had opened up between the Who and the new younger generation.

“I had to accept that we had reached our peak of popularity at Woodstock, and however famous and successful we still were as a band, our ability to reinvent ourselves was declining as we continued a long slow descent from that moment when Roger sang ‘See me, feel me, touch me, heal me,’ the sun rose up behind us, and my guitar screamed to 500,000 sleep-tousled people.” 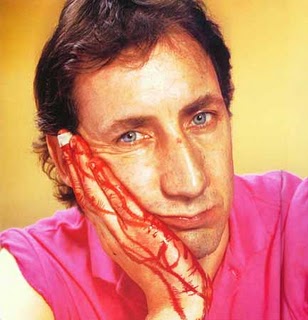 Here’s more Pete from Alexis Petridis in the Guardian.

Tags:  pete townshend  who I am

Big fan of the Who from the 60's on! In my opinion Quadrophenia is one of the all time greatest albums! After that record, they haven't matched their previous success as far as I'm concerned! Looking forward to reading the book!

I appreciate them more than really like them. But, strangely enough, I've always liked Pete. This book looks interesting.

The Who was the band my friends in high school united around, even though it was already the early '80s by then.

Townshend and The Who will always have a special place deep in my heart. I go stretches without listening to them (Classic rock radio played the brilliant "Who's Next" to death, it's hard to hear it with fresh ears anymore, sadly), but I always return to them sooner or later. I will definitely read Pete's book.

The Who By Numbers is perhaps their most underrated album. Also, the other night on my iPod, "The Kids Are Alright" came on and I thought, "Man, this is just a perfect single." One of the great teenage tunes for sure.

Best concert I ever say was The Who on tour w/ Tommy ('69 I think) in Syracuse at War Memorial Coliseum. First set: the entire album, virtually w/o a break. Second set: greatest hits pre-Tommy. Perhaps 3,000 fans in the hall. 3 hours plus. Emerged into the night to find that a blizzard had started; 3 hours for the 45 mile drive back to Ithaca, with The Who blasting on the 8 track.