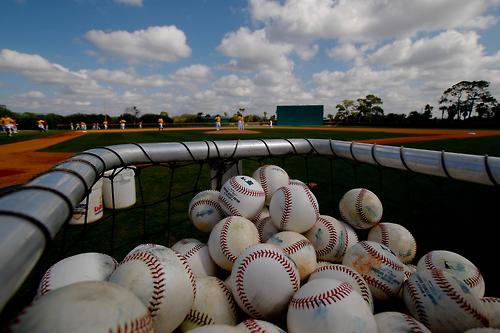 Nice piece on Eric Duncan and the difficulties of making the major leagues by Chad Jennings over at Lo-Hud:

I doubt this comes as a shock, but not everyone works hard in the minors. Not everyone is willing to wipe out a second baseman, or change positions or do early work in the cage. And some of those guys who don’t work nearly as hard have enough natural ability to win opportunities that other guys can only dream about.

“I never really looked at it like that, and I especially don’t look at it like that now,” Duncan said. “For all the guys you see that make it and you think, ‘Man, if that guy made it definitely could have made it or should have made it.’ For every one of those, I played against two other guys that you’re like, ‘If this guy’s not making it, I’m never going to make it.’ Do you remember (eventual Cubs big leaguer) Bobby Scales? I remember playing against that guy in Pawtucket and he was just so good. Power and speed and he could play every position on the field, and then you talk to the guy and he’s like the nicest guy ever. That was one of the guys. It was like, if this guy can’t make it, Jesus, what am I going to do?”

“You see a lot of prima donna players make it to the big leagues because they don’t play with that same intensity so it doesn’t beat up their body, but that’s not Eric’s character,” Shelley said. “… There’s as lot of horse**** players in the big leagues too, that people look at as really good, but the truth is they’re horse**** players, and there’s a lot of players in the minor leagues that are better than them.”

Projecting Minor Leaguers into the Show has got to be the most difficult part of baseball talent evaluation.

I bet you've got some Derek Jeters and ARods and a whole-lotta "right-place-right-timers".

I mean, why Super Joe McEwing?

I went to High School with Duncan, he was a year behind me, and honestly we ALL thought he would make it. To think he never got so much as a cup of coffee is pretty depressing.

I really wonder what they actually saw that told them he wasn't major league material. It would seem to me that Cash's judgment of talent is conflicted at best. But if Duncan couldn't get a cup of coffee in KC, it was probably right for him to retire. Twenty-seven is young; if he still loves baseball, he'll go overseas or over the border and keep playing. If not, good luck to him in whatever he does. From here, at least he gets to tell his kids and their kids that he played professional ball; a lot of us wish we could say that much.

[4] I'm not sure it's much of a mystery. His AAA numbers were craptastic and he played 1B only. In fact, I would argue that the organization kept him around so long at AAA despite declining production suggests they held out hope as long as possible that he *could* contribute at the ML level.

[4] Cashman is a GM, not a talent evaluator. My guess is there is a large committee that's consulted when making these decisions. Cashman has the final say-so, but my guess is that he is just executing the consensus opinion.