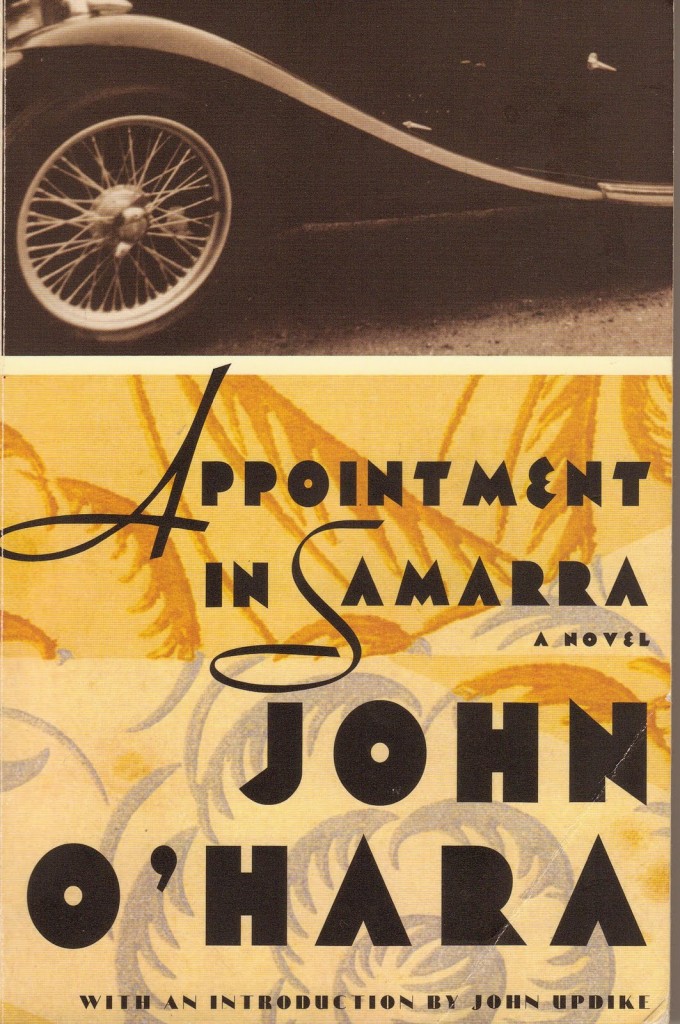 If you’ve never read John O’Hara’s first novel, do yourself a favor. Penguin Classics has published a new edition of the book with an introduction by Charles McGrath, excerpted over at The New York Review of Books:

Originally published in 1934, John O’Hara’s Appointment in Samarra is still the only American novel I know that begins with a scene of a married couple—Luther and Irma Fliegler—having sex and on Christmas morning, no less. Later in the book, another married couple—Julian English, the novel’s protagonist, and his wife, Caroline—make love in the middle of Christmas afternoon. Julian has been dispatched on a disagreeable errand, and Caroline rewards him by waiting in their bedroom in a black lace negligee she calls her “whoring gown.” About their lovemaking, the novel says, “she was as passionate and as curious, as experimental and joyful as ever he was.”

Before O’Hara, sex in American novels—polite novels, anyway—was mostly adulterous, not something that proper married women engaged in, or if they did, they weren’t known to enjoy it. Appointment is a genuine love story, charged with eros but stripped of sentimentality, and the relationship between the Englishes is more convincing and more satisfying than that of, say, Gatsby and Daisy in The Great Gatsby, or Frederic Henry and Catherine Barkley in A Farewell to Arms. Though unfaithful to her, Julian can’t stop loving Caroline, and after O’Hara devotes a whole chapter to her intimate thoughts and sexual explorations before marriage, the reader can’t help falling a little in love with her, too. Caroline, for her part, reflects at the end of the book: “He was drunk, but he was Julian, drunk or not, and that was more than anyone else was.”

The speed with which the book was written may account for the urgency of its storytelling. O’Hara began it in December 1933, when he was just twenty-eight, and wrote it in something like white heat, finishing in a little under four months. Set in the fictional town of Gibbsville, Pennsylvania, a lightly disguised version of Pottsville, where O’Hara grew up, the entire action of Appointment in Samarra—Julian English’s whirlwind of self-destruction—takes place in just thirty-six hours, and its breakneck pace is startling and exciting. Even on a second reading, when you know what’s going to happen, you tear through it still not quite believing in what’s just ahead and what’s already been established by the novel’s epigraph, taken from W. Somerset Maugham’s play Sheppey (in which Death speaks of meeting a merchant in Samarra): an appointment in Samarra, we know from the beginning, is an appointment with death itself.

I'm a fan of "Appointment in Samarra." I keep planning on reading more O'Hara, but I never do. I believe I have that edition with the Updike intro.

1) I have a Dell pocket paperback edition. Got it in high school but never read it until a few years ago. Just get any greatest hits short story collection with O'Hara. You won't be sorry.