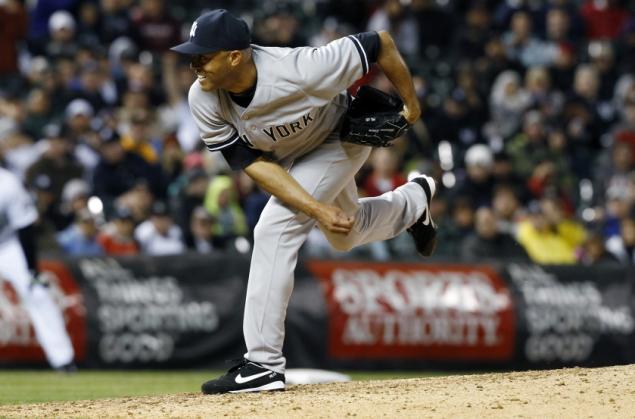 I was too young to remember Ali in his prime, or even Dr. J. I watched Bird and Magic and then Jordan, so I know from watching greatness, admiring it, even when–in the case of Magic or Jordan–I rooted against it. But I’ve never rooted for anybody as great as Mariano Rivera. After the game was over last night and Rivera had recorded his 14th save of the season I tried to articulate my feelings when it hit me–I don’t have any idea of what it’s like to watch Rivera as a Yankee-hater. Every time I’ve seen him pitch, I’ve wanted him to succeed.

With Rivera, discussions of the value of a closer compared with the value of a starting pitcher or an everyday player are mind-numbingly boring. And they miss the point. Sure, his numbers provide their own proof and satisfaction (Looking at Rivera’s post-season statistics is like watching a parade of zeroes). But greatness is a singular thing Rivera’s aesthetic brings a touch of myth to the discussion. Mike Francesca was right when he dubbed Mo “The Great Mariano,” a nod to Hemingway and “The Great DiMaggio.” With Rivera, we’re talking a modern myth: The Silver Surfer.

More than any player I’ve ever rooted for, Rivera makes me appreciate the moment, the now. This has something to do with the dramatic nature of his position, coming in a the end of the game, but also his stubborn calm–I’m always reminded of the phrase “mulish imperturbability,” which James Agee used to describe Buster Keaton.

There’s an old sports writer’s cliche that says it is easier to write about the losers than the winners because winning isn’t that compelling. How do you explain what Rivera does? He chalks his gift and success up to the Lord and what can you do with that? We can dream up our own theories but they amount to the same thing: He’s blessed by something deep and profound. We  know he works hard and appears to posses humility.

“When you respect the game of baseball, you respect everything that comes with baseball–the guys that are my peers, the other teams, you have to respect them…You’re not bigger than the game. You’re finished and the game will continue, so take into consideration, you always will keep that line and say humble. Because the game will always be bigger than you. Always. So it’s nothing you can do that will be better than the game.”

He’s said things like this for years and he seems sincere, even though we can never pretend to know a public figure intimately by what they say for print. We do know that opponents flock to him as if he were a Holy Man like this scene a few weeks back against the Blue Jays. 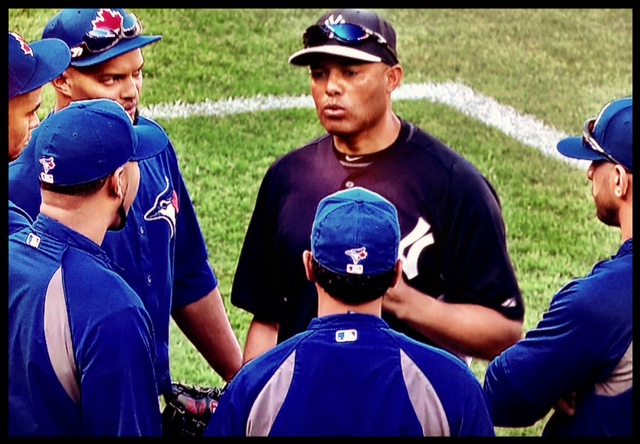 And we know that his pitching motion is as beautiful and fluid as any that we can remember. Dr. J once said, “When you reach a level of greatness, there’s a certain added element that goes into making it look easy.”

What we can do is talk about what it means to watch such a performer, how they give us a sense of assurance and peace in our imperfect and unpredictable lives. For Yankee fans, that feeling goes away at the end of this year. There will be other great players, more artistry to come, but nobody will ever do it quite like this.

Yes, Mariano's style and grace make him supremely unique. A player for the ages, and all that.

If you're a Yankees hater, but an honest baseball fan, my guess is, you're not happy with yourself about loving him. To them I say, get over it already, and be at peace with your admiration of his greatness.

You do not have to be a Yankee fan to appreciate the greatness that is Mariano.

As an aside I believe that talk he was delivering to the Dominican contingent of Blue Jay's was "Smarten Up, and start playing baseball the right way. You're embarrassing yourselves."

Mo can make you cry sometimes, he's that good.

I saw Mo close out KC last night on my Apple TV. After that gane some girl interviewed him. He keep raising Jesus (he did say Lord who is Jesus). It was after the interview the camera stay on him when he walked to the dugout. Just before he stepped down, he stopped, looked left and saw a young boy. He walked over to him, extended his hand that looked like 2 knuckles connecting, and then walk to the dugout. The boys light up like a Christmas tree. So you want to know how he does it? He believes and lives Jesus. Happy Mother's Day -)

All praise be to Mo.